A look at the 2017 F-series of Super Duty trucks 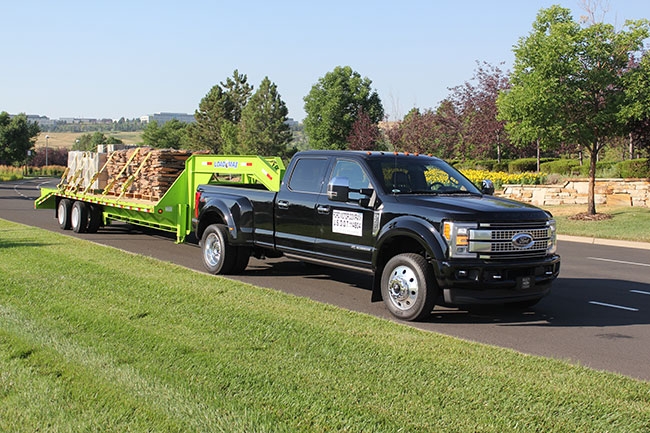 The Towhaul feature uses the transmission to slow the load, as does the engine exhaust brake found on the diesel. Photo courtesy of Howard J. Elmer.

Almost 20 years ago the Super Duty line of Ford trucks was born. Built to tackle the biggest jobs that pickups could handle, the Super Duty gained a following right away.

Today the newest Super Duty introduction is just as important as that original one – because the number of jobs for these trucks just keeps on growing. Heading to Colorado to look them over I was looking specifically for what needs Ford had satisfied with this newest generation of its big trucks. First impression – they’ve covered a lot of new ground.

This F-series Super Duty lineup of trucks is all new for 2017, including the adoption of the same aluminum cab that the F-150 got two years ago. That fact alone makes this next generation of Super Duty special.  With the engineers adding the all-aluminum body, this now means there is only one design for both classes of Ford trucks; and that in turn means that updates and improvements to any and all the cab systems will now be available to both half-ton and HD trucks in the same year. It also seems appropriate then that this alignment of truck bodies is coming on an all-new chassis as well.

Adding strength and reducing weight, this new Super Duty is 24 times stiffer than its predecessor. The fully boxed frame is taller and has up to 10 cross-members, which include the under-box supports for the factory-installed fifth wheel/gooseneck hitch receiver.

It’s these changes that really make the new model the true second generation of a truck that was first introduced in 1999. That’s how long the F-250 thru F-450 has been hauling those heavy loads without a major update (despite ever-increasing weight limits).

Not this time though: for 2017 almost every nut and bolt is new and with that comes increased power and weight capability. Mind you, we’ve come to expect those increases each time a new truck is brought to dealers. After all, in the truck world there is a war going on. If you’re a little fuzzy on what I’m talking about, just think of the nightly propaganda war being waged in TV ads by the manufacturers. My favourite tagline is “if you have to ask how much something weighs, you probably can’t handle it.” That says it all.

Now comes Ford’s latest shot in this weight war. The new Super Duty is claiming several victories – its latest top numbers are 32,500 lb. towed with an F-450 and a maximum payload of 7,630 lb. Both of these numbers are now being touted as best-in-class. But as every truck person knows, what you can haul is just as important as being able to brag about your engine. So the second generation of the 6.7L Power Stroke turbo-diesel has also boosted its horsepower and torque to 440 and 925 lb.-ft. respectively.

Here in Denver, Colo., where I tested the Super Duty, there was a variety of trucks available to drive but I was immediately drawn to the F-450 towing the gooseneck trailer with a nice 30,000 lb. load of landscaping stone. I too wanted to experience those “max” tow limits in part because I still find it amazing that pickups today are built to haul weights that were considered commercial loads back when I started driving tractor-trailers in the early 1980s.

The Power Stroke powered F-450 handled the weight and chassis is noticeably stiffer – even in jackknife 180-degree U-turns the truck does not tilt or squat. Under moderate braking it retains a level attitude without any hobbyhorseing and much of the driving that day was up and down the foothills here at the start of the Rocky Mountain range. So, while my initial focus was devoted to the weight claims that Ford was making, as the kilometres click by, slowly, another side of the towing experience caught my attention. This new line of Super Duty has more towing help and convenience features than any that have come before it.

It starts with seven cameras placed around the truck, including one in the rooftop brake light array. With this one you can easily see the trailer pin as the truck backs up to the hitch. It even has a “magnify” button that doubles the image size. Hooking up (bumper or in-bed) is now an easy one-person job. Meanwhile the other cameras offer 180-degree views off the nose or a 360-degree bird’s eye view. Given the size of these trucks, working (or backing up) in close quarters is so much easier and safer with these multiple eyes at every corner of the truck. Ford even offers a camera that can be fitted the rear of your trailer then hooked into a truck’s video display through the electrical connector. This lets you see behind your trailer – an infamous blind spot.

The Towhaul feature uses the transmission to slow the load, as does the engine exhaust brake found on the diesel.

The other aspect of towing that I’m always harping on is stopping. Sure, I love the power – love to pull uphill (which this Power Stroke does), but frankly nothing is as important as stopping without scaring the crap out of yourself! In this Super Duty, Ford has installed an interrelated series of new stopping features meant to keep you cool and your shorts clean.

It starts with the Towhaul feature that uses the transmission to slow the load, as does the engine exhaust brake found on the diesel. The gear shift lever also has a manual gear selector; and if the tranny is kicked down using the brake, it will hold its gear.

But the most significant improvement comes with an addition to the adaptive cruise control. It will use the truck’s brakes, its engine brake and the trailer’s brakes through the trailer brake controller to hold the pre-set speed of the rig – all while going downhill, all automatically. Similar to the system that GM uses, this improvement will relieve the white knuckles often caused by being pushed by your load.

The other feature that made itself noticeable was adaptive steering. As the name implies, the steering ratio “adapts.” At slower speeds, when the driver is turning pin to pin, the travel shortens up (by as much as one complete revolution of the wheel) while at highway speeds it gets longer offering a more sensitive on-centre feel. Again, for backing up while towing, this is a great innovation.

If you’re sensing a theme, it’s because clearly there is one. First you have to build a truck that can handle the weight it’s claiming – Ford has done that. Then you need to give the driver the tools to haul all that weight safely and create systems that reduce the stress that comes with trailering. Sure, you may have the skills that towing demands, but the systems in this truck can only make you better at it. The 2017 Super Duty Ford has accomplished both goals.

Howard J Elmer is a truck and ATV writer living in rural Ontario. He penned this review for Ground Water Canada.
Print this page