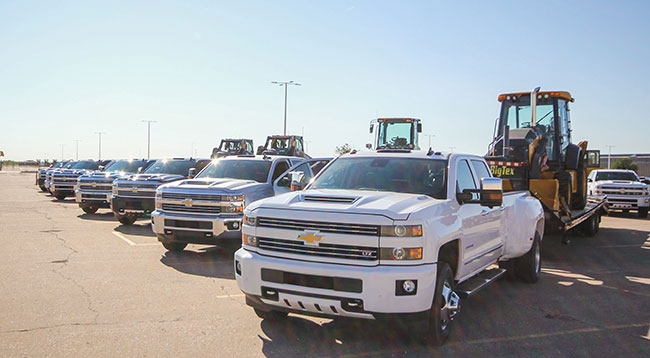 Today’s pickups, particularly the HD versions, have so much capacity and power that drivers need help in managing these loads. GM has built in several driver assist features to do just that.

Chevy recently partnered with John Deere at its world headquarters in Moline, Ill., to show off its newest version of the Heavy Duty Silverado pickup.

The reason? A work-related backdrop is vital to understanding the needs of the HD truck owner and frankly what looks better than some spanking new construction equipment towed by shiny 2018 Chevy trucks.

So, while this setup created the right visual, the actual towing of up to 20,000 lb. highlighted not just power but also a new trend in safety that has original equipment manufacturers tying existing on-board technologies together electronically.

These are known as “driver assist features.” This is a new phrase that is becoming more common when describing the innovative electronic features found in today’s pickup trucks. I bring this up first when looking at the 2018 Chevy Silverado HD because the traditional newsworthy trifocal of towing, payload and power are fast becoming secondary to this new headline – Driver Assist Features. I, for one, am just fine with that. Frankly, with the exception of a new hood scope design, the tin on the 2018 has not changed and yet the truck has changed so much for the better.

Today’s pickups, particularly the HD versions, have so much capacity and power that drivers need help in managing these loads. GM recognized that first in 2015 when they incorporated a cruise control system that stopped over-speeding on long downhill grades. At the time I wrote, “On the new 2015 the cruise control computer is also integrated with the exhaust brake, transmission shifter and trailer sway control. What’s that all mean? Net result – down a seven per cent grade the truck did not pick up speed; the brakes did not come and it never upshifted; all I did was steer. So, don’t all HD’s do this? Straight up, no. GM is the first to pull all these systems together and have the computer take care of it all. And, this is what inspires confidence – the speedometer didn’t budge off 90 km-h even with all that weight pushing the truck downhill.”

The trend towards more electronic helpers continues, as does the quest for HD weight supremacy – after all that is still the name of this game.

Today’s pickups, particularly the HD versions, have so much capacity and power that drivers need help in managing these loads. GM has built in several driver assist features to do just that.

So, for 2018 this last set of numbers demands a truck that can handle them – power-wise and, more importantly, safety-wise.

The new 6.6L V8 turbo-diesel has been redesigned with a new cylinder block and heads. Oil and coolant flow capacity has been increased and the turbocharging system is now electronically controlled. Horsepower has increased to 445 and torque now reaches 910 lb.-ft. Ninety per cent of both numbers is achieved at just 1,550 rpm. A new patent-pending feature is a redesigned air intake system. Using an integrated hood scoop (on 2018 HD Silverado and Sierra) this setup has a trap for snow, sleet and rain, allowing cool, dry air to get to the engine without clogging up the intake.

A new two-piece oil pan makes the Duramax quieter and also houses an integrated oil cooler with 50 per cent greater capacity than is found on the current engine. Of particular interest to Canadians will be the new Duramax cold-weather performance. With microprocessor-controlled glow plugs the engine requires less than three seconds to preheat in temps as low as -29 C. These new ceramic glow plugs adjust current to each plug based on outside temperature. This new engine continues to be coupled to the Allison 1000 six-speed automatic transmission, which has a stellar reputation.

The mechanical update to this Duramax diesel engine now officially starts it building sales into its second generation. The original Duramax sold more than two million copies since its 2001 introduction.

So that covers power – but moving loads safely requires all of the truck’s systems to work together “smartly.” GM’s HD trucks get a number of system upgrades this year to build on the trend the company started in 2015. A new Digital Steering Assist improves road handling. A new tire pressure monitor system now includes a tire fill alert. All full Driver Alert Packages include Lane Departure Warning, Forward Collision Alert, Safety Alert Seat and Front and Rear Park Assist. GM’s longtime StabiliTrak stability control system has been updated to include rollover mitigation technology, a tie-in to the trailer sway control and hill start assist. Visual help is found in the Chevrolet MyLink with an eight-inch-diagonal touchscreen. Of particular interest is the camera system that broadcasts on this centre-mounted touchscreen (now standard on all models with the cargo box). It shows reversing images that make hooking up easy – whether it’s to the bumper hitch or the in-bed fifth wheel. An around-the-truck view assists in parking manoeuvres. The signals now activate cameras in the mirrors showing images down the side of the truck, highlighting the blindspot. You can see right down the side of any towed trailer as well. Other improvements include an available Gooseneck/5th Wheel Trailering Prep Package with a spray-in bedliner. Electronic upgrades include wireless phone charging and remote locking tailgate.

These are the types of driver assist systems that I see coming into the mainstream. They will help prevent collisions and in general make the operators job that much easier, and that is the future. The OEMs have built a generation of highly competent HD trucks – load wise. Now they have to help make them easier to drive and safer in general. From what I saw, GM is well on its way to this goal.

Howard J Elmer is a truck and ATV writer living in rural Ontario. He penned this review for Ground Water Canada.