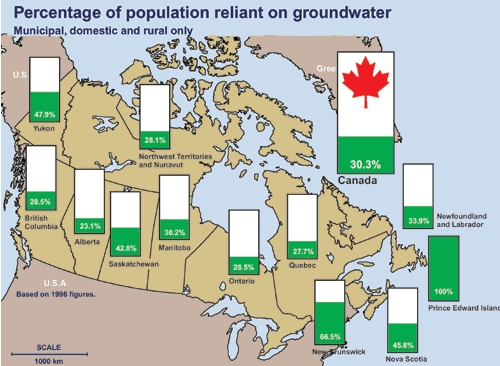 In Canada, 8.9 million people, or about 30 per cent of the population, rely on ground water for domestic use?

This illustration shows the percentage of the population reliant on ground water for municipal, domestic, and rural use only:

Advertisement
*Based on 1996 figures.

According to Government of Canada statistics, approximately two-thirds of these users live in rural areas. In many areas, wells produce more reliable and less expensive water supplies than those obtained from nearby lakes, rivers and streams. The remaining users are located primarily in smaller municipalities where ground water provides the primary source for their water supply systems. For instance, 100 per cent of Prince Edward Island’s population and over 60 per cent of the population of New Brunswick rely on ground water to meet their domestic needs.

The predominant use of ground water varies by province:

In Ontario, Prince Edward Island, New Brunswick, and the Yukon, the largest users of ground water are municipalities.
In Alberta, Saskatchewan, and Manitoba, the agricultural industry for livestock watering.

In British Columbia, Quebec and the Northwest Territories, industry.

In Newfoundland and Nova Scotia, rural domestic use.

Prince Edward Island is almost totally dependent on ground water for all its uses.