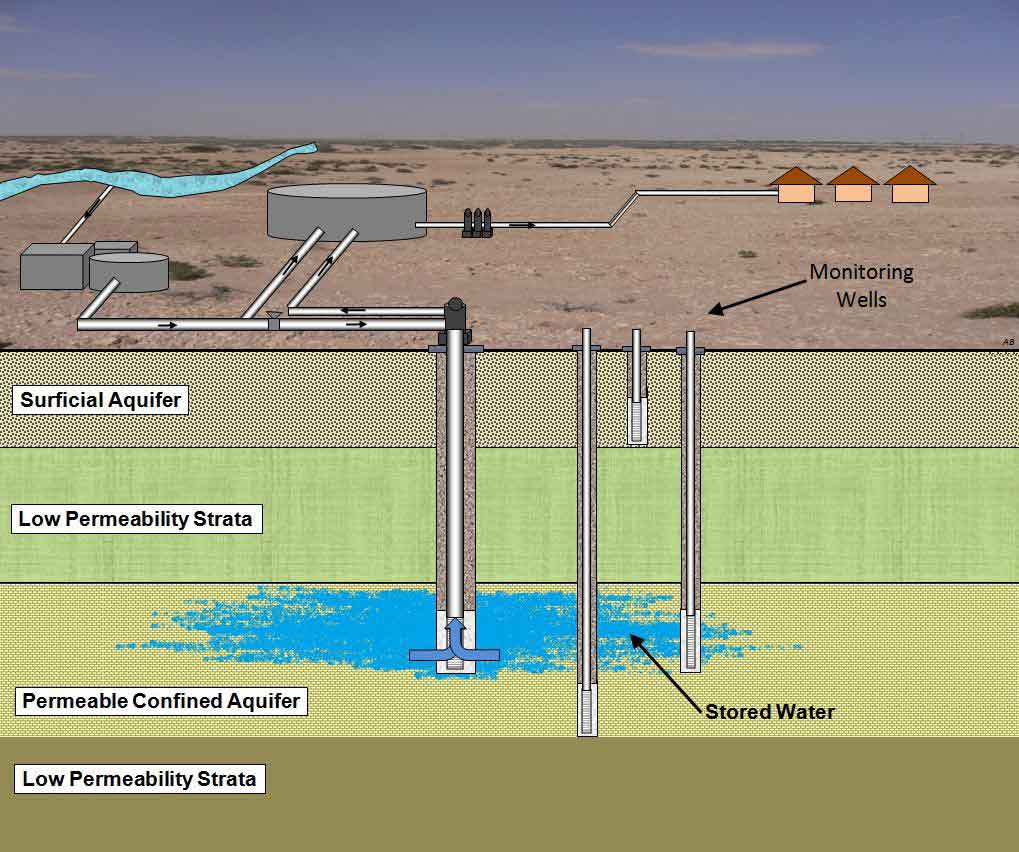 Aquifier storage and recovery (ASR) involves collecting and storing water in aquifiers when precipitation is abundant and then pumping out the water in times of need.

Recent reports in the media have illustrated declining water levels in aquifers in California and the midwestern United States.

A recent study conducted by researchers from the University of Victoria, University of Calgary and other universities has raised the issue of worldwide over-pumping and scarcity of ground water. Entitled “The global volume and distribution of modern groundwater,” the research clarifies earlier rough estimations of worldwide volume and confirms the finite nature of this resource.

Conversely, much effort is being made in parts of the world (such as Calgary) for flood mitigation: storage dams and diversions are planned for times of too much water. Alternating droughts with occasional floods illustrates one of the problems with water – water is not available when it is needed.

This is one reason we build dams, which are temporary water storage devices for surface water.

A lesser-seen but equally valid procedure is to collect and store water when precipitation is abundant in aquifers and then pump out the water in times of need. This procedure is called aquifer storage and recovery (ASR). The procedure is common in Africa and becoming established in parts of the United States. ASR is less common in Canada but certainly there is no reason it should not be undertaken here.

Historical researchers have pointed out that prior to development of the North American continent ASR was occurring more under natural conditions: forests, wetlands, beaver dams and even gopher holes allowed for greater natural recharge of ground water. With agricultural and industrial development, these features of the landscape were removed, leading to dwindling ground water recharge.

The principle of ASR involves collecting water at times of higher precipitation or high river flow into surface impoundments and allowing the water to percolate into the aquifer. Sometimes a confining layer such as clay till is at the surface and water will not percolate at a sufficient rate. Stripping the upper confining layer is one option for the storage reservoir. Injecting the water into the ground directly through wells is another.

An ideal situation is to use the recharge areas as both flood control and aquifer storage, a practice often undertaken in parts of Africa that experience short rainfall seasons and long hot and dry periods. These regular seasonal events allow for easier planning and rationalization of an ASR project rather than for contingencies for a project in 100-year flood events.

Other advantages of ASR include prevention of land settlement due to over-pumping and lessening of salt water intrusion on coastal aquifers.

However, there could be other problems. The injected water does contain oxygen and aquifers do contain bacteria; thus, plugging of wells and aquifers by iron bacteria may occur and enhanced well maintenance may be required.

Mobilization of metals such as chromium or arsenic could also be a problem that occurs with changing ground water conditions.

Is there a role for water well drillers? The technique requires the installation of pumping and injection wells, along with the installation, operation and maintenance of pumps. Observation wells to monitor performance and volumes of water going into and out of the aquifer will be required. Possibly some well performance problems may be encountered and remediation work on wells could be required.

Will ASR contribute to a sustainable ground water industry? Definitely.

The National Ground Water Association has a 22-page free download entitled “Best Suggested Practices for Aquifer Storage and Recovery” that drillers should consider viewing if they are involved in an ASR project.

Ken Hugo is a technical director and hyrdogeologist with Groundwater Information Technologies (GRIT).