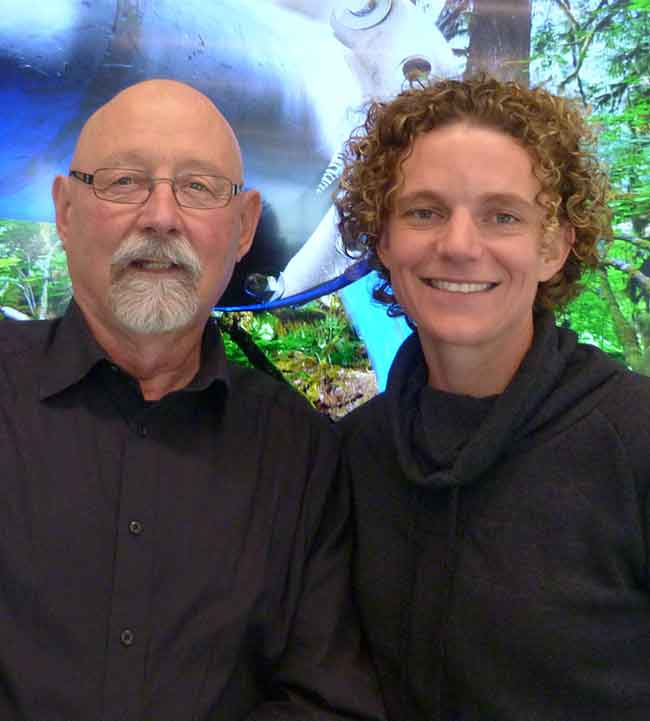 “Try to get over your issues with government and learn. Work with them. Try to find common ground. It doesn’t happen overnight, but if you keep at it, in a non-aggressive manner, it happens,” says Bruce Ingimundson, who retired as the BCGWA’s managing director last September. Ingimundson is working closely with Kathy Tixier, who follows in his footsteps in the newly defined role of general manager. Photo by Ron Nelson

When Bruce Ingimundson joined the BCGWA in 1975, it was mainly a water well drilling association. The pump installer trade was just beginning to evolve.

Membership counted few hydrogeologists and engineers and even fewer government people. And because the association was established partly as a reaction to fears around regulation, relations with the government were somewhat adversarial.

That was reality in the 1970s, and in the ’80s and into the ’90s, when Ingimundson was elected technical-professional director – a role he fulfilled for more than 15 years.

In 2000, when Ingimundson began his two-year stint as BCGWA vice-president, things started changing. They kept changing, as he shifted to association president from 2002 to 2004, followed by five years of executive positions, and, finally, the role of managing director from 2009 to 2015.

When he retired last September, Ingimundson handed over the reigns of an association vastly different from the one he signed up with in the ’70s.

“I have big shoes to fill,” says BCGWA’s new general manager, Kathy Tixier, a hydrogeologist with a consulting background, noted for strong organizational and communication skills. “Now that I’m running the boat on my own, so to speak, I can very much appreciate all that Bruce [Ingimundson] handled when he was managing director.”

“I hope to continue to be a credit to the work that he’s done and live up to the votes of confidence from my peers,” she adds.

Mike Wei, from the Aquifer and Watershed Science, Water Protection and Sustainability Branch of the B.C. Ministry of Environment, has been a colleague of Ingimundson’s for more than 30 years.

“He’s had probably a couple of careers, if you look at it. They’re all in ground water, but they’re in radically different roles,”
Wei adds.

Ingimundson, a consulting hydrogeologist with Thurber Engineering in Victoria for 38 years, is profoundly influential as a unifier of people. The growth of membership in the BCGWA is a telling example. Since 2000, BCGWA has expanded from being primarily well drillers and pump installers to an all-encompassing membership that includes tradespeople, professionals, municipal engineers and other affiliated organizations.

“There are so many other trades, at least nowadays, that are involved in ground water supply and ground water delivery than there were maybe 30, 40 years ago,” says Ingimundson, who is quick to say that BCGWA’s accomplishments were the work of many people and not his alone.

“And each group is represented, so nobody’s left out.”

Indeed, including five executive members, it is a 17-member board.

“In one sense, it’s a big challenge because our pie is more diverse, with diverse interests, and it’s hard to come up with an aligned set of values and aligned direction,” says Tixier about the board she has inherited. “At the same time, it’s a great strength because if we can get these different groups interfacing more with one another, exchanging information and ideas, we’ll find a lot of commonalities that can strengthen everyone.”

“There’s richness in diversity,” she adds.

Ingimundson admits that it hasn’t always been easy. “Sometimes, there’s a little fumble between the old school and the new younger guys.”

One of the ways Ingimundson has distinguished himself relates to those internal barriers.

“If a guy’s got an iron ring on his finger, that doesn’t mean he’s not human. I’m a geoscientist. I’m one of those guys,” he says. “On the other side, the engineers, geoscientists, have to be, as [former BCGWA president] David Slade said about me, ‘not afraid to get his boots dirty.’ ”

Tixier shares that view and has experienced the benefits first hand.

“I got a master’s degree in hydrogeology but just about everything I’ve learned about wells, about the practical aspects of well drilling or testing or maintaining wells, I’ve learned from my colleagues and consulting, but a lot from the drillers, a lot from the tradesmen,” she says. “They’re on the ground seven days a week doing this work.”

Mutual respect and recognizing the value of sharing knowledge has gone a long way in unifying membership.

“In the last 10 years, it’s really come together as a group, not only to better their workload and whatever they do in their trades, but also to come together on a lot of things,” Ingimundson says.

An example of that was working in conjunction with the Industry Training Authority (ITA) to create official provincial trades, adding well pump installer, geotechnical/environmental driller, and geo exchange driller to the already existing water well driller.

“For us, [the collapse of the CGWA] turned out to be probably a good thing,” says Ingimundson, clarifying that he doesn’t mean that in a disrespectful way, but that it pushed B.C. into action. “It took a lot of support from the Ministry of Environment, and now we have those trades.”

The resulting apprenticeship programs include examinations acceptable to both the BCGWA and ITA. Each trade has its own association, but all are affiliated with the BCGWA.

“You can see the thread here,” Ingimundson says. “Everything’s affiliated. It’s about co-operation and working with people.”

That thinking extends beyond membership. Over the years, BCGWA has expanded its relationship with BC Water & Waste Association in projects concerning ground water quality and hydrogeology. It also works with Agriculture Canada and the MOE in the development of well-owner workshops and regional district-supported presentations. A board member links the BCGWA with GeoExchange BC. And Canwell 2004 and 2014 has established relationships with associations and individuals across North America.

There is another advantage.

“It’s helped us get involved with the government at a different level,” Ingimundson says.

A stronger BCGWA meant greatly improved relationships with the MOE, the Ministry of Forests, Lands, and Natural Resource Operations, and the Health Regions.

“Despite the fact that we’re government and they are industry, and we don’t always hit the same notes every time. We overlooked that and we developed a lot of trust,” Wei says. “We did it because of the personality of people like Bruce and, currently, Kathy Tixier.”

Personality is important in partnerships, he adds, along with a willingness to find the common ground that leads to solutions.

“I think that’s been probably one of my most cherished experiences working in the public service,” Wei says. “Being able to walk with these professionals and contractors to do things that would better our resource.”

About working with Wei, Ingimundson says the relationship has been a big plus.

“It’s a big help when you get a civil servant who looks beyond the government side, looks at us as people. We’ve developed a very good relationship with Mike [Wei] and his people and he with myself and our people.”

Within the BCGWA, getting membership to work with government meant changing some attitudes.

“I said, ‘Look guys, you’ve been fighting the government for as long as I’ve been around here. . . . You’re not progressing. Let’s put the axe aside and start working with these people and get them working with us,’ ” Ingimundson says.

It took time, but it has been worth it. Working together meant being able to address outstanding well records and developing the aforementioned trades. It also led to the Ground Water Advisory Board in 2003. Four of the six people on that board were from the BCGWA. Wei and Ingimundson were co-chairs.

“The advice the board gave resulted in the current Ground Water Protection Regulation,” Wei says.

While the six years of work weren’t always easy, Ingimundson says everyone was determined to find commonalities because, until very recently, B.C. had virtually no ground water regulations.

The resulting regulations laid the groundwork for the soon-to-be-issued Ground Water Protection Regulation under the Water Sustainability Act.

“It’s going to be a transition for some of our people but we’ve been involved in this all the way along. We have our stamp on those regulations,” Ingimundson says.

Inheriting the relationship with government is something Tixier values.

“Bruce has done a great job growing our relationship with the ministry and maintaining those good communication lines,” she says. “We need to get some regulations in place to protect our ground water resource. We need to set some industry standards on how we drill wells and construct them, and the association played a big role in communicating that to government and drafting the regulations.”

Wei is confident about working with Tixier.

“We started working with Kathy on planning how could we communicate with the drilling and consulting industry when the Water Sustainability Act is brought into force and implemented,” Wei says. “Head- and heart-wise, she is very smart, very willing to work together. She’s got a good personality. She has a willingness to work with us, which is super welcomed.”

Tixier describes her new position as a facilitator, communicator and manager, and says her role is about pulling out a consensus vision from the board of directors and being accountable to them.

“I’m very much a task-oriented person. I like to feel productive. The association has no shortage of tasks to keep me busy,” she says. “The challenge is getting the priorities right so they’re aligned with what the members expect from the association.”

She says her first priority is to listen and hear from the board where to focus. The upcoming regulatory changes will require significant attention. The first phase will be about licensing, with the ground water protection a focus in the second phase.

“The challenge is maintaining a balance between being protective of our resource and promoting its development, and supporting our members whose livelihoods depend on developing ground water and investigating ground water resources.”

Tixier is also working toward facilitating BCGWA involvement in regulatory development right from the beginning stages, not just for review comments after the first draft has been written.

“I would like to encourage that the communication be throughout the process,” she says.

Like Ingimundson, Tixier believes in bringing people together to find common ground.

“Policy and industry development need not just be led by the academics, consultants, and regulators, but also from the ground up, from the people that are out there working in the industry every day,” Tixier says. “There’s a lot of knowledge, a lot of common sense, a lot of experience, lessons there that we can all learn from.”

A true leader, Ingimundson turned the BCGWA into a shining example of what co-operation and mutual respect can accomplish.

With Tixier taking the lead, the future of the BCGWA looks to be in good hands.

Carolyn Camilleri is a Toronto-based writer, editor, and content strategist. She has been writing for consumer and trade magazines, as well as businesses and organizations across the country for more than 15 years on such topics as food, books, business and technology.