Stewart Hitchon and the story behind Well Busters 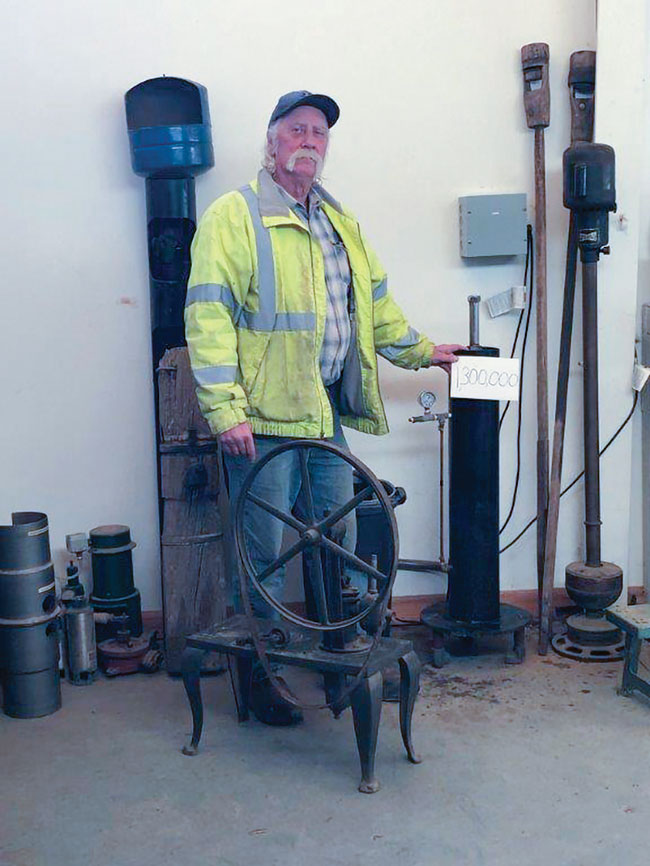 In the shop at Well Busters, back where Stewart Hitchon keeps many of the antique pumps he has collected over his 46 years in business, a 2018 iteration of a flowing well packer called the Well Buster has been running 24/7 since March 2018.

“Right now, this unit has cycled 1,300,000 times without failure on a suck-and-blow device,” Hitchon says. “It runs nonstop to see how long it’s going to last before something wears out in it. We have a lifetime warranty on all this stuff.”

Hitchon owns two businesses connected to the water-well industry, an industry he got his start in when he was just 12 years old, buffing fittings and digging holes for an outfit owned by his father’s friend.

“Back in the late ’60s, a lot of houses were still not hooked up,” he says. “I was like the groundhog, the digger, and I learned the trade very, very young, and I had to learn fast.”

“They called it ‘a device’ and said that you must install a device that does this and this and this, but there wasn’t one on the market. So, we jumped on it.” –Stewart Hitchon


He started his own company, Hitchon Pumps, in 1975 at the age of 19, by which time he had already been on several adventures: hitchhiking to Florida and out West, driving to Mexico and back, and travelling to Scotland, England and France.

Over the years, Hitchon says he did many different jobs alongside Hitchon Pumps, including running an irrigation business for 27 years. But Well Busters – both the business and the flowing well packer that carries the name – has an especially interesting story.

Sometime in 2003, a former employee was visiting Hitchon Pumps and looked at a device they were working on, commenting that it might work for the new rules.

As it turned out, stringent new regulations in Ontario called for a device to control the water from flowing wells.

“But it didn’t exist,” Hitchon says. “They called it ‘a device’ and said that you must install a device that does this and this and this, but there wasn’t one on the market. So, we jumped on it.”

The “we” he refers to includes Daniel Kofler, an in-house tool and die maker who passed away in 2014. Hitchon calls him a genius.

“I could draw something on my cigarette package, and [Kofler] would have it made the next day. He could understand and he could see what to make,” Hitchon says. “This guy was a wizard with steel. He was just phenomenal.”

In less than six months, they had it working, then tested it for a couple of months nonstop.

“It was just straight determination and trial and error,” he says.

Some of the trials were brought to Fleming College.

“We got kicked out of Fleming College a couple of times before we got the thing fixed. We would take something up, and they’d say, ‘Well, it doesn’t suck and blow. It doesn’t breathe,’ and the guy was right,” Hitchon says. “And I said, ‘The next time we come in here, this thing will work.’ ”

And it did work. While Hitchon tends to give all the credit to Kofler, it was truly a joint project.

“I did conquer the idea on the suck and blow,” he says, referring to the air-release mechanism that allows the well to breathe and makes it compliant for wells in the cold climates it is designed to work in.

Getting it right was gratifying. Production molds, testing, and manufacturing were all done in house at the shop in Belleville, Ont.

“Then we did a show in Edmonton and one in Vegas the same year and never looked back. It sold itself,” Hitchon says.

That was in 2005. Fast forward 15 years, and Well Busters are in place in thousands of wells across North America.

“Well Busters are usually sold where the weather gets cold so your well won’t freeze,” Hitchon explains. “It shuts off down under the frost line so the well can breathe, and that’s why it’s so successful.”

While preventing freezing was the main reason the Well Buster was designed, it also conserves water by controlling flow and preventing groundwater from being wasted.

“The hundreds and hundreds of millions of gallons of water that would be starting new wetlands and eroding people’s property – that’s conservation,” he says.

While the Well Buster stops flow, Hitchon points out that it has its limits. Major flowing wells, for example, wells in Northern B.C. or at mines and tar sand sites in Alberta and Saskatchewan, require a spool: an industrial-made packer that would be welded onto the casing.

“For domestic and industrial wells, any place with a PSI that’s not over 20, and it’s a new well, is no problem – our product works perfect.”

He goes on to say that, ultimately, the onus is still on the driller to construct the well properly.

“I don’t want to see anybody using this device on a well that’s 20 or 30 years old,” he says. “If it was never put in properly like today’s regulation, and if it blew out, then who’s responsible for the blowout? Not me. That onus goes back onto the driller.”

And Hitchon knows all about constructing a well properly. In addition to the manufacturing end of Well Busters, the company does everything to wells except drill them.

“We upgrade them. We decommission them. We clean them. We rehabilitate them,” he says. “Then Hitchon Pumps does installs, service on all existing water wells, new hookups, and sales and service of water pumps.”

The two businesses are located side by side in Belleville.

“So, it could be all one company, but it’s not. It’s two separate corporations,” he adds.

While Hitchon Pumps is the bigger and busier of the two businesses, it was Well Busters that was in the spotlight at the 2019 NGWA conference in Las Vegas, when Hitchon received an equipment design award for the Well Buster. It’s a well-deserved award for an innovative response to a change in regulations that resulted in the development of one of the only tools to control flowing wells efficiently and economically.

Hitchon has no plans to sit on his laurels and retire yet – in fact, he is working some new inventions now, so stay tuned – but he is taking it a bit easier these days.

Thinking back, what he enjoys about his work now is the same as when he started his first job in the industry.

“It’s a gratifying job. You leave somebody’s driveway, they’re so happy to see you go because now they’ve got water.”