Life-giving for recipients, life-changing for drillers 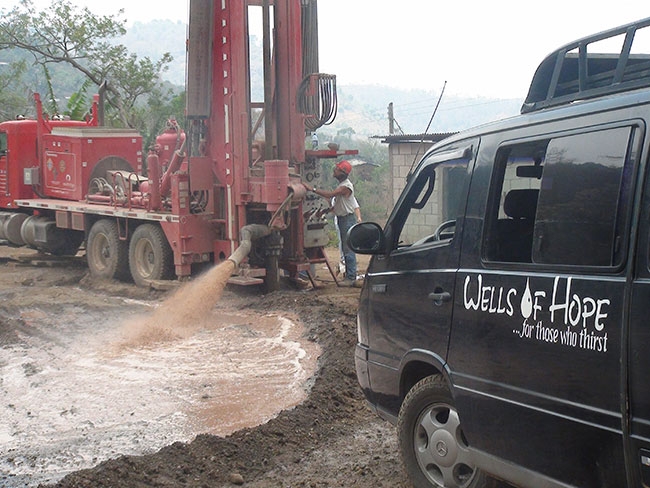 Ted and Miriam van der Zalm founded Wells of Hope in 2004 and have since drilled 21 wells and brought clean drinking water to over 73,000 people in Guatemala.

Giving back to the community through charitable donations is a key focus for many businesses who want to show customers they care about more than the almighty dollar.

This corporate social responsibility is driven in part by socially conscious millennials who are forcing the issue with their immense purchasing power.

However, as business owners jump into charitable giving, they’re quickly realizing that the benefits are far reaching, and in some cases, life changing.

Ted van der Zalm, a water well driller in Ontario’s Niagara region, has first-hand experience with the impact that charity involvement can have on one’s life. After travelling to Tanzania right after university and working on a drilling project that brought clean drinking water to locals – many of whom were either ill themselves or had lost somebody due to contaminated water – he knew he needed to do more.

Van der Zalm met his future wife, Miriam, a volunteer from Italy, on the project in Tanzania and eventually they married and moved back to Canada.

“We were then approached by people in Guatemala to see if we could help them like we did in Tanzania. We packed up our four kids [they now have five], the youngest was two months old, and we drove to Guatemala. We lived in tents for six months. Every two weeks we moved to a new village so we could hear from the people themselves. Everyone said, ‘We need water, water, water!’ ”

The couple founded Wells of Hope in 2004 and have since brought clean drinking water to over 73,000 people in Guatemala, drilling 21 wells in Jalapa and Jutiapa. Providing this life-giving resource has had as much of an impact on van der Zalm as it has on the villagers. “These women walk up to five kilometres each day multiple times to bring home dirty, bacteria-infested water. While I’m drilling, the whole village is out there watching the progress and when the water starts blasting out of that ground the women are crying knowing they never have to walk for water again. There’s nothing I’ve done that’s comparable,” he says.

Making positive change in the world, like van der Zalm is doing in Central America, is what millennials seek out and value most. According to a September, 2016 article by Inc.com’s creative executive Molly St. Louis, studies have shown that 70 per cent of millennials will spend more with businesses that support causes. St. Louis goes on to explain, “Given that millennials represent $2.45 trillion in spending power, the notion of ‘giving back’ may be very powerful for your company’s sales, not to mention, its overall purpose.”

To break it down, when the young couple who have just bought their dream home need a new well drilled, there’s a good chance they’ll give their business to the company that’s donating time or money to projects like Wells of Hope. In January, an article in the Globe and Mail by Paul Attfield noted that “Beyond the traditional corporate charitable activities, though, companies should look at ways of using their employees’ skills to help non-profit organizations innovate and bring the fastest and biggest level of change at the lowest cost, says one expert in this area.”

That expert is Paul Klein, founder and chief executive officer of a Toronto-based consultancy called Impakt Corp. In the article, Klein explains, “It’s not just doing all the team-building activities and events and so on, the walks, the runs and everything. It’s harnessing the professional skills and abilities of employees to help these non-profits and [their] partners improve their capacity and ability to make change.”

For water well drillers, these skills could include consulting on challenging drilling projects in remote places, donating actual time to go and drill the wells or donating equipment. There are many ways to get involved; however, for van der Zalm, volunteers from the drilling world have been far and few between.

“We did have one driller that we met at a convention, and he came down and helped me for a season. It was the only time I had a driller help me, so it was fabulous to have a volunteer donating his time and expertise so it wasn’t all on my shoulders. Even if they could take a well or two off my hands, then I could focus on another well.”

The drilling season for Wells of Hope is from January to May, aligning perfectly with the notoriously slow winter months for Canadian well drillers.

“We are inviting people to bring their gifts and talents into the field,” van der Zalm says. “We have many volunteers come over during the four to five months that we’re there, so we recommend a minimum 10-day stay – and those 10 days are life changing for many people. If anything, they go home grateful for the opportunity.”

Other Canadian charities doing similar work include Ryan’s Well Foundation, which is focused on bringing clean drinking water to West Africa, East Africa and Haiti, and Lifewater Canada, which has volunteers training and equipping people in Africa and Haiti to drill wells and build washrooms.

The massive impact these projects have around the world does not go unnoticed. In December 2016, van der Zalm was honoured by the Governor General of Canada for his commitment to the Guatemalan people through Wells of Hope.

“I’ve drilled wells here in Niagara and there’s little satisfaction other than to say I’m able to support my family,” van der Zalm explains, “but in Guatemala, where there’s no hope and children are dying at an alarming rate due to infested water, we can make a big difference. We put in these wells and now they no longer have to travel five kilometres multiple times a day for water, and they can grow vegetables. We are impacting the health and welfare of these communities for generations to come.”

Back on the business side of things, St. Louis writes that four big benefits to corporate donations include: 1) employee morale through a boost in positive general attitudes; 2) increased marketing by getting your name out there; 3) tax deductions; and 4) it’s good for your community. “One way to engage employees to participate is to align the company’s donation choices with causes that have the greatest meaning to your workforce,” she notes.

Giving to charity is good for business. But it’s clear that the biggest benefits do not come in dollars and cents. Giving the gift of hope and health to those who need it most is bound to transform the heart of the giver.

Julie Fitz-Gerald is a freelance writer based in Uxbridge, Ont., and a regular contributor to Ground Water Canada.