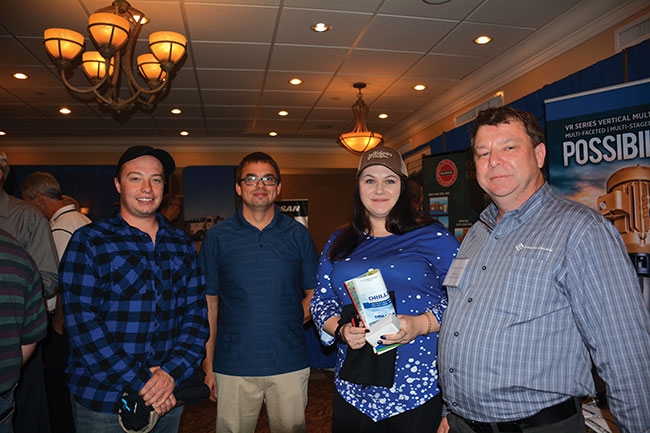 Justin and Marcie Hammond of Martin B. Hammond Well Drilling in South River, Newfoundland, talk with Gaston Brazeau (second from left) and Peter Gay (right) of Franklin Electric at the company’s booth.

The first association convention in several years took place from Sept. 27 to 29 in the friendly town of about 12,000. Truro is known as “the hub” due to its location at an intersection of railroads. It’s well known for its Stanfield’s Underwear plant, which has operated since 1870 and currently has some 400 employees.

Many attendees connected with old friends at the meet-and-greet on Thursday evening, to tuneful fiddle music from Gord Tucker that included favourites from Men of the Deeps to Elvis Presley.

Drillers attending from Newfoundland, Prince Edward Island, New Brunswick, Nova Scotia and Ontario had a chance to swap stories that evening – some of them true!

Faye Beaton organized a Friday morning session for the ladies featuring motivational speaker and yoga therapist Knickolle Pitcher, who offered inspiration and tips on how to “live your best life.” In the afternoon, the group enjoyed an afternoon out that included lunch in the vintage Dining Car and Train Station Inn in Tatamagouche, and a tour of Jost Winery in Malagash.

LEARNING FROM MANUFACTURERS
As wine was being sampled, some 50 drillers and employees went back to school for the day to learn about diverse topics relating to drilling. Here are a few highlights of the presentations from manufacturers and distributors:

Gaston Brazeau of Franklin Electric described troubleshooting techniques for different types of pump motors, starting with a primer on the basics of electrical systems and getting into more complex issues encountered on the job. Brazeau explored the causes of low and high amperage, and noted that tools such as meggers and amp meters can be very useful.

Neal Kuszewski of Numa showed everyone how to take care of their down-the-hole hammers and bits to stretch their working life. One takeaway was that carbides of different configurations, numbers and hardnesses are available to suit different drilling conditions.

Tony Oosterveld of Viqua explored the risk involved in water disinfection applications. All disinfection applications – filtration, air injection, ion exchange, ultraviolet and activated carbon among them – have an element of risk of contamination, Oosterveld said, and it’s important to assess that risk before deciding which techniques to use and using them to full advantage. Oosterveld, who specializes in ultraviolet treatment systems and has done research and regulatory work in water quality, said he has come to view water treatment holistically, balancing continuous disinfection with ground source protection.

Mark Duckworth of Baroid IDP, a subsidiary company of Halliburton, gave an overview of mud drilling in unstable conditions. The single largest source of contaminants is the solids produced by the drilling process itself, Duckworth said. He went through common drilling issues such as borehole instability and casings/screens not going to the bottom of the well. He also discussed the importance of using some form of drilling fluid and looked at additives that drillers can mix with bentonite to make jobs easier and more successful. He urged “volume over velocity” when drilling to avoid turbulence as much as possible and said some drillers have had success using a product called Fuse-It that is designed to stabilize the hole.

Yannick Belanger of North East Equipment went over compressor basics and care and looked at different types of compressor oil. Belanger stressed the importance of finding your optimal interstage pressure. He said it’s possible your oil may not need changing as often as you think and suggested having it tested (which can be done for approximately $30-40 through a manufacturer) before assuming it needs replacement. However, after 500 hours, drillers should consider changing the oil.

Justin and Marcie Hammond of Martin B. Hammond Well Drilling in South River, Newfoundland, talk with Gaston Brazeau (second from left) and Peter Gay (right) of Franklin Electric at the company’s booth.

TRADE SHOW TIME
Truro’s mayor, Bill Mills, attended the opening of the trade show and chowder supper. Mayor Mills remarked on having worked with some of the exhibiting suppliers on projects over the years and noted that, with the need for disaster preparedness, there was potential to work together in future. A silent auction raised about $2,000.

Nova Scotia Ground Water Association president Jordan Rogers said that although provincial associations meet individually, the AWWA convention provides a much-needed chance for drillers and pump installers to talk to their suppliers face to face and hear about new products and equipment.

Among the drilling companies represented were Martin Hammond from Newfoundland, Fred Constable and Son from Ontario, Hawkes Well Drilling of New Brunswick, Moore Well Drilling and Thompson Drilling from P.E.I., and DJ’s Well Drilling from Nova Scotia. Many reminisced over a photo display of conventions and past Canwell events.

On Saturday morning, as the trade show wrapped up, drillers took in two informative talks.

Don Baron of Aqseptence (formerly Johnson Screens) offered up some “chemical tricks for young pups.” Baron said it’s important to distinguish between cleaning and disinfecting as different products and techniques do different jobs. He showed attendees how to figure PPM from percentages and looked at common disinfectants such as hydrogen peroxide, liquid bleach and powdered bleaches including those containing products such as Nu-well 100 or 110, which some drillers are finding useful.

Mario Brunet of CETCO looked at advancements in geothermal technology and the role grout can play in improving efficiency of ground source heat pumps and reducing the number of boreholes needed on a job. The increase in fracking has made silica less plentiful, Brunet said, and graphite is becoming an increasingly popular option for larger contractors. Among other benefits, it is lighter and less abrasive than silica and will stay in place in the column as it does not drop out of suspension.

For more on the East Coast scene, read this issue’s “Hub of the community,” “Ready for the weather” and “First drive on the Rock.”