Well drillers have a role in educating and engaging the public 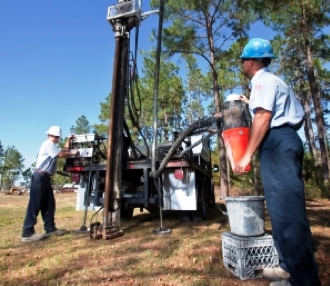 Once again, water has been listed as 2016’s “Global Risk of Highest Concern” for the next 10 years by the World Economic Forum’s Global Risk Report.

Coming in as a close second this year is “failure of climate-change mitigation and adaption.”

It’s the kind of news that gets attention but also highlights where public water knowledge is lacking.

“There are a lot of people who don’t understand the basics of ground water – what it is, what an aquifer is, how ground water flows in the subsurface – a lot of people have no real sense of it or they have a very fuzzy, vague idea of it,” says Tom Gleeson, Civil Engineering Faculty, University of Victoria.

Rivera concurs. “Because it is hidden, it is very difficult to grasp. Some people think it is just isolated there, but it isn’t isolated. It is vulnerable, it is connected, and it actually feeds rivers and lakes,” Rivera says. “For many years – and this is changing – when you talk about water, people think about surface water only. They don’t realize that there is also ground water.”

Kathy Tixer, BCGWA general manager, says many people don’t understand what kind of water – surface or ground – they use on a daily basis. Vancouver and the Lower Mainland is an example.

“I think there is an opportunity to fill a knowledge gap,” she says. “If people were more aware of where their water is coming from – as in, they are drinking the water under their feet – they may be more careful about their water use and how they dispose of hazardous liquids.”

“I think of drillers as the front line – that’s who is interacting with the public the most and every day – and they can and hopefully will have the role of emphasizing and encouraging and educating people on what ground water is and the role it has and why we should be treating it and managing it better,” Gleeson says. “Drillers are a very experienced, educated, intelligent group of people who know a lot about ground water systems.”

And drillers know the value of the resource.

“If you went back to the beginning of the B.C. Ground Water Association, about 35 years now, you would have found that the industry norm would be strong and vocal opposition to any kind of licensing or permitting of wells because it was the Wild, Wild West. It was an endless resource,” says David Slade of Drillwell on Vancouver Island. “I think everybody who is a professional in this business now realizes that it’s not an endless resource. It’s not a bottomless pit. “

Awareness within the industry has inspired other changes.

“I’m a farmer, too. I have a small hobby farm. I’ve got solar panels on my roof and drive a hybrid car. I don’t fit the stereotypical model of the redneck driller very well anymore,” Slade says.

“I think there are a lot of people [in the industry] who maybe haven’t ‘come out of the closet’ as far as their concern for environmental issues,” he says. “When I was president of the BCGWA, one of my monthly articles was ‘Out of the Closet,’ about how I decided that rather than be a closet environmentalist, it was time to start shouting from the rooftops about the need to protect our resources.”

And shout he did.

“I have been engaged in creating educational materials and promoting awareness and education. The BCGWA and our business own ground water models that I have taken to various community functions, some sponsored by local government and some sponsored by schools. Once in a while, there will be a Boy Scout thing,” Slade says. “They’re interested in knowing about ground water and its relationship to surface water.”

Launching a public education program isn’t something every drilling company is in a position to do.

“Lots of water well drilling businesses are pretty small shows. At least, historically, that’s the way it’s been. Mom and pop and a couple of kids and maybe one, or two, or three rigs,” Slade says. “When that’s the kind of a business you run, it’s hard to think about much besides the drilling and maintaining your equipment and trying to get this job done and that job started.”

Slade considers himself lucky that his business grew to a point that he could get involved in the BCGWA board, as well as on an industry basis drafting regulations.

“I think people would be surprised at how much uptake there would be if they were willing to put their names or their faces out there. If they were willing to approach the Boy Scouts or the district or even the local farmers institute or association,” Slade says. “Whenever we go out, there are always ­– or at least often – conversations about water.”

Well drillers may not be the most outgoing people, however.

“It’s not always the case but often well drillers don’t tend to be public speakers or educators, and I think some of them are a little bit shy when it comes to that kind of thing,” Slade says. “But even a letter to the editor can get a bit of attention. It opens the door to opportunities.”

Public presentations aside, there are other ways for drillers to get involved.

“What drillers can do best is to know their trade and to drill wells that are up to spec with regulations that are designed to protect ground water resources and maintain good standards of practice,” Tixier says. “I think that is an essential thing that they do.”

Then drillers can go one step further by making sure owners have well logs.

“Drillers can really advocate for that. They have a role to play in getting that documentation to the well owner, explaining it, and, particularly in B.C., making sure it is submitted to the government’s well database,” Tixier says. “Not only are drillers great educators to the well owner but they also play a key role in facilitating an awareness for everyone else on where wells are and what groundwater is being tapped for use. That well log is a key element.”

And considering how many years a well may be in use, that log plays an important role in stewardship, which Jim Clark, a regional director for the BCGWA, describes as looking after and caring for something – giving back.

“These are natural resources and we have been privileged to work on them unsupervised,” Clark says. “If it were the forest or the fisheries, you’d have to have someone watching you. You can’t just go out there and start chopping trees down. We are making decisions ourselves here, and I think we can be very proud that they trust us that way.”

“Everyone has to understand their stewardship role and recognize that they are protecting a resource,” he adds.

Passing that perspective on to customers is something a well driller is in a premium position to do.

“Well drillers have really a very special place in regard to ground water. It’s so mysterious to most people, and well drillers are in close, physical contact with what is going on underground,” Slade says. “It’s a great topic for conversation. It really does engage people.”

Resources may be available to well drillers through their provincial associations. In Ontario, Well Aware, a now defunct initiative between Green Communities and the Ontario Ground Water Association, developed materials for domestic well owners that are still available online for download.

Clark says he was impressed by the quality of some of the videos he found on YouTube. He adds that while some are directed at a high knowledge level, others are more entry level and would be good for well owners to watch.

Advocating for initiatives between provincial associations and other water-related organizations is another way to get involved. The BCGWA participated in an event with the B.C. Water and Waste Association at Science World in Vancouver, where family-friendly displays and activities aimed to increase public water education.

The Canadian Water Resources Association, a national charity committed to raising public awareness of the value of water and to promoting responsible and effective water resource management in Canada, is very keen to have more drillers in its membership.

“I believe that CWRA and well drillers have a mutual interest in improving water management in Canada,” says Rick Ross, CWRA’s executive director. “I would very much like to have CWRA be the national association for ground water. It would give the ground water drillers a greater voice and more exposure.”

At an association level, opportunities may also exist to partner with government ministries. In 2011, the BCGWA teamed up with the Ministry of Environment and the Ministry of Forests, Lands, and Natural Resources Operations to host Well Owner Workshops.

Bruce Ingimundson, who was BCGWA’s managing director at the time, says the public was invited to the three-hour slide-and-discussion sessions on what ground water is, where it comes from, how it travels, and its relation to surface water.

“Really, really basic stuff and people have really grabbed on to that. It was very well received,” Ingimundson says.

“It makes one feel good when you come out of there and they say, ‘I’ve had a well all these years and it was a pipe in the ground and I turned the tap on and the water came, and that’s all I needed to know. But now to understand where it comes from and why and what the risks are and what I need to do to look after my well and my pump and so on,’” Ingimundson says. “It’s good for everybody for sure.”

With water so much in the news, now is as good a time as any.

“I don’t think that In B.C. we’re going to be California in the next 20 years, but maybe in the next 100 years we are,” he says. “We really don’t know what the future will hold, but I’m really big on employing the precautionary principle while you’re trying to decide.”

And part of that precautionary principle is spreading the word about ground water.