Collaboration among Humber College, the University of Toronto and DGI Geoscience Inc. has yielded a method of groundwater monitoring that can save time and money. 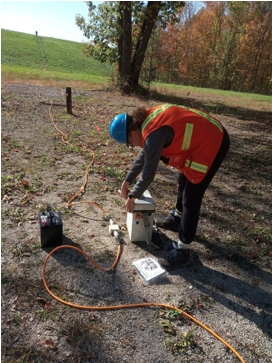 Dr. Maria Jacome, of Humber College, led a team to develop a geoelectrical method for monitoring landfill leachate and gas that saves time, avoids many of the costs associated with current monitoring of landfills and paints a more detailed picture of aquifer activity. Photo courtesy Maria Jacome

Recently, Dr. Maria Jacome, PhD, P. Geo, professor of civil engineering technology at Humber College in Toronto, worked with the Natural Sciences and Engineering Research Council and Humber’s Office of Applied Research and Innovation to develop an alternative geoelectrical method for monitoring landfill leachate and gas that saves time, avoids many of the costs associated with current monitoring of landfills and paints a more detailed picture of aquifer activity.

The professor and her team discovered how to obtain a 3-D model of any landfill that allows users to see possible sources of contaminated groundwater.

Ground Water Canada spoke with Jacome, a senior geoscientist with more than 15 years of combined experience as college/university professor and industry consultant, in the areas of applied earth and environmental sciences and civil engineering-related subjects. She has expertise in integrating surface and borehole seismic data with geological information for oil and gas and mining exploration as well as environmental/civil engineering studies.

The research, funded by Humber College Applied Research and Innovation and an NSERC Engage Grant, was done in Simcoe County, Ont., north of Toronto. It was arranged through Laura Barret of the Office of Solid Waste Management at Simcoe County. Jacome, Vincenzo Costanzo, PhD, and Chris Drielsma, MSc, P. Geo, presented the research to county officials.

Jacome originally conceived the project out of a desire to apply her skills used in the oil and gas industry to environmental studies.

“I wanted to focus on landfills, a main producer of methane, or greenhouse gases,” she explained. “There are about 150 landfills around the Great Toronto Area. I wanted to find a site with good groundwater quality. Simcoe County has some of the most pristine aquifers in the world where a lot of groundwater mining takes place.”

“We started one year ago monitoring information from the aquifer. It took us six months to complete our proof-of-concept,” she said.

Conventional monitoring of landfills typically involves perforating control wells and taking water quality samples periodically to see if landfill contaminants are infiltrating, Jacome said. “It’s expensive, time consuming and it gives you only a segmented picture of what’s happening. We wanted to have a more complete picture.”

Jacome’s method provides a fuller characterization of a landfill and its vicinity as a dynamic, complex and heterogeneous system. It involves placing electrodes in the ground and connecting them to a source of direct current. “We receive signals on soil, water and other material,” she said.

She likens it to performing an ultrasound, a kind of tomography, on the ground. Jacome’s picture shows many colours, each colour indicating different level of contamination. For example, red could indicate salty water and also lower resistivity values, which means there could be leachate plumes and waste present.

“The geoelectrical method will give you the right location of the plume and tell you where it is going,” Jacome said. “It’s important to know for purposes of remediation and to prevent or mitigate contamination.”

Jacome said the method will be useful to anyone working in the environmental industry, such as municipalities who need to monitor groundwater and remediation companies.

She is especially excited about the promise this research holds for detecting methane gas. Thanks to the 3-D tomographic images of landfills, methane gas can now be linked with leachate contamination, giving us an idea, early on, where potential leachate/methane patterns and their associated problems are likely to appear in the future.

In short, the geoelectrical method provides more useful data, is a fraction of the cost and is able to gather data much faster than conventional monitoring methods.

How fast? “In one week, we got 1,200 datasets and a clear picture of what was going on inside an aquifer,” Jacome said. This amount of information that, typically, would take years and require approximately 15 monitoring wells.

Four geoelectrical survey lines were set up during the one-week field work that took place between September and October 2019.

Jacome’s method is based on research done in the mining industry since the 1980s. It is used in the environmental industry in only few places in Canada, but has been used for some time in Europe.

Jacome earned her PhD in Europe and spent time researching the environmental industry in Germany, the U.K. and Denmark. “These countries don’t have a lot of space, so they must make the most of their land,” she said. “We couldn’t find something similar in a big country such as Canada.”

Costanzo from the University of Toronto’s Advanced Thermal/Fluids Optimization, Modelling, and Simulation (ATOMS) Laboratory assisted with the research. They did numerical modelling, collected methane data and found the link between leachate migration and accumulation with methane emissions through geoelectrical modelling with algorithms, or machine-learning tools.

They used the Syscal Pro Switch 96 multinode resistivity and induce polarization imaging system made by Iris Instruments, which is used for environmental and engineering geophysical studies. The system is distributed by Terraplus of Richmond Hill, Ont.

“We connect the source to a battery to produce direct current,” Jacome explained. “Then we connect this to cables placed 10 centimetres deep in the ground. The current penetrates soil. Soil will either conduct or be resistant. The data can generate a 2-D tomographic image down to 60 metres’ depth – potentially, deeper.”

This equipment is highly portable – it looks like two large suitcases – and she is optimistic the technique can be used across Canada in places that have problems with contamination and potential contamination, and communities that use a lot of groundwater.

Jacome is writing a scientific paper based on this research and expects to release it later this year. She is writing a new proposal to NSERC to do a more extensive study involving six landfills to be chosen by Simcoe County as requiring study or remediation.