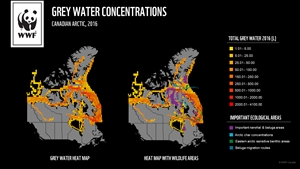 Ottawa – The amount of untreated grey water dumped in Canadian Arctic waters is projected to double by 2035 if left unregulated, says a new report commissioned by World Wildlife Fund Canada.

As climate change makes the frozen region more accessible, grey water from vessels’ galleys, showers and laundry is being released in increasing amounts into the fragile Arctic marine ecosystem, which is home to whales, walrus, seabirds, fish and other marine organisms, the WWF said in a news release.

Current hot spots of greywater dumping in the Arctic intersect with important whale habitats, such as calving areas and migration routes, as well as areas of high concentrations of Arctic char and sensitive benthic habitats. Contamination of fish and shellfish threatens food security in northern communities.

Ships passing through Arctic waters in Canada are not required to adhere to any specific regulations for grey water and ships are not monitored for dumping this harmful waste into the sea, the report says. Transport Canada rules for grey water are much more stringent for waters below the 60th parallel.

By 2035, tourism will be the biggest source of greywater dumping, according to the report.

The report, entitled “Canadian Arctic Grey Water Report: Estimates, Forecasts and Treatment Technologies,” suggests even a small increase in the number of passenger ships can have a big impact on the amount of grey water being dumped. Due to the large number of passengers on cruise ships and their higher water use per person, tourism is projected to generate the most grey water by 2035, especially in the Northwest Passage.

Ships used for mining exports and fishing spend much more time in the Arctic, so even though they have fewer people onboard and lower levels of water use, they are also large contributors.
Vessel grey water comes from showers, baths, laundry, dishwasher and galley wastewater.

It contains nutrients (such as nitrogen and phosphorus), oil and grease, detergent and soap residue, metals (such as copper, lead and mercury), bacteria, pathogens, hair, organic matter including food particles, suspended solids, bleach and pesticide residues.

The study, prepared by Vard Marine Inc., builds on a previous, similar greywater analysis from 2015.

It presents a baseline for waste in the region in 2016 and provides projections for the quantities, types and areas of greywater concentration in the Canadian Arctic in 2025 and 2035.

The report also points to various greywater treatment options that could be used on ships to eliminate environmentally harmful substances.