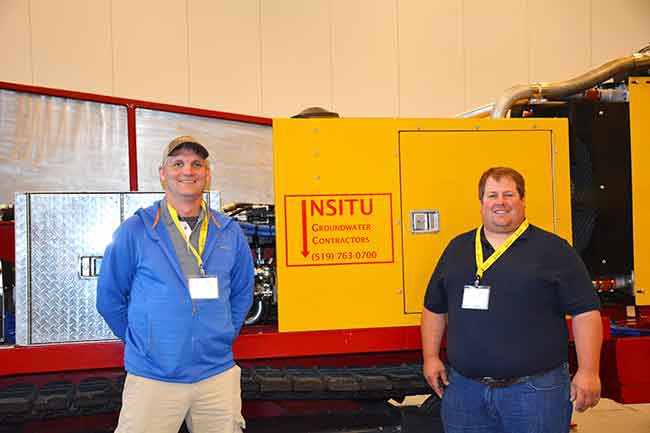 Josh Douma and Kevin Kopec of InSitu Contractors in Guelph happily posed with their Nordic Drill DR-10-A (they planned to take it home after the show).

Drilling for ground water is more than a day-to-day business. It’s a responsibility and a chance to help sustain our environment and the human lives that depend on its health.

The Canadian Ground Water Conference and Expo, which took place June 8 to 11 in Niagara Falls, Ont., served as a reminder of ground water’s vital importance.

For the first time since Canwell in 2014, members from across Canada – including contingents from British Columbia, Saskatchewan, Manitoba, Ontario and New Brunswick – met to discuss the business, technical, regulatory and scientific aspects of bringing ground water to the public.

The conference served as a hub for those interested in locating, accessing and protecting ground water. Learning about the many complicated aspects of this precious resource took the form of educational sessions, group discussions, entertaining presentations, and displays from manufacturers and suppliers of equipment and products.

Lots of high-level and ground-water-level thinking went on at the Marriott Fallsview Hotel and Scotiabank Convention Centre, where the marquee gave ground water high visibility in an international vacation spot.

After a rather cool round of golf Wednesday evening, members were asked at Thursday’s lunch to do some big-picture thinking. Alfonso Rivera, chief hydrogeologist for the Geological Survey of Canada challenged a room full of keenly interested water well drillers, pump installers and hydrogeologists to imagine what a Canada-wide industry association might look like and what role it might play in the overall scheme of ground water management.

Rivera, who spent many years with National Resources Canada and was involved in key ground water committee discussions, summarized works published and actions taken over the years by the federal government, culminating in the Council of Canadian Academies’ 2009 recommendations published in The Sustainable Management of Groundwater in Canada. The Canadian Council of Ministers of the Environment is moving forward on these recommendations through the provinces, he said. What’s needed is “a clear collaborative and co-ordination mechanism” for carrying out the report’s ideas, along with more funding, wider sharing of data and more personnel.

Water well drillers are key partners in accounting for ground water, he said, and encouraged drillers to work more closely with the GSC to share their pumping levels, well records and other data. “The wells are our eyes,” he said.

Rivera also shared details of ambitious ground water mapping projects he has been leading at the GSC. As part of his proposed national framework for aquifer and ground water accounting, Rivera and his team have mapped 19 of 30 aquifers using remote satellite technologies. By 2019 they expect to have 22 completed, at which point they will begin taking action based on the data they have collected. Assessing and providing ground water use information is a key step in making sure government budgets reflect the quantity and allocation of ground water,
Rivera noted.

Those attending the session agreed to the next step of each provincial association appointing a representative to come to the national discussion table. Larger goals of a central Canadian organization include the co-ordination of standards and having a united voice with which to lobby government. Practical priorities expressed in the meeting included keeping membership costs down and not making it mandatory for members to belong to their provincial association.

William M. Alley, the science and technology director for the U.S. National Ground Water Association, provided a fascinating overview of ground water sustainability. Alley, who also served as chief of the Office of Groundwater at the United States Geological Survey for nearly two decades, defined sustainability and laid bare some of its common myths.

He described sustainability as “the development and use of ground water in a manner that can be maintained for an indefinite time without causing unacceptable environmental, economic, or social consequences.”

Among myths he debunked: ground water and surface water are separate resources, ground water systems are safe as long as pumping doesn’t exceed recharge (in fact, ideally, pumping should at a lower level than recharge), and to manage ground water we need to know exactly how much we have, or “total storage” (in fact, although measurement is important, there are other factors involved, and a small change in levels can have a big impact).

Alley identified pressing challenges, such as as nitrates in Chesapeake Bay, and the need to establish total daily maximum load in the face of disagreement among scientists.

Another kind of resource got plenty of attention at the conference: the human resource. During an educational session, Fleming College’s Jim Smith made a convincing case for prioritizing staff training. Smith, a professor at the college and the new head of the resources drilling and blasting program, following retiring longtime professor Gordon Bailey, pointed out that the Internet has made customers far more, if not always accurately, educated. He asked drillers if their staff could adequately answer questions that arise on the jobsite, and, more pointedly, if they had trained their employees to answer them. Effective training involves setting skill objectives, teaching to meet those objectives and assessing an employee’s retention of the training. It’s important to keep in mind that some people learn by seeing, others learn by hearing and still others learn by doing, he said, adding that varying your teaching methods will address these differences in learning styles.

It’s important to keep the objectives in mind; for example, using a chainsaw is a skill to be taught with the wider goal of cutting down a tree without damaging nearby buildings.

David Coletto may have opened some minds with his talk on managing millennial workers. Coletto is a founding partner and CEO of Abacus Data, a company that focuses on strategies for working with and marketing to the so-called millennial generation encompassing those aged 16 through 36. Millennial Canadians have the same values and goals as their baby-boomer parents – getting married, buying a home, having children and having a steady job – but they express these goals differently, the youthful-looking 34-year-old said. These young workers, many of whom were raised by overprotective parents, need structure, he added. Coletto encouraged an audience largely made up of baby boomers and gen Xers to provide young workers with training and professional development and to offer them regular feedback on their performance.

One theme that emerged from the event was the idea of people in the water industry being connected – to their clients and to one another. Canadian Water Quality Association executive director Kevin Wong touched on this notion by suggesting water well contractors take it upon themselves to become go-to resources for their clients. Wong, an animated and passionate speaker, updated members on recent regulatory work he and the association are doing on behalf of the water-well industry. His work includes getting water treatment incorporated into the plumbing code and helping ensure that a section of the CSA B483.1 standard for drinking water treatment systems fully supports the code. Wong shared his goal of incorporating rainwater into legislation and of seeing sustainability included in the building code. “We have to do things differently,” he said.

Wong also had some advice for water well contractors: Know the water chemistry and be able to communicate it to homeowners, water treatment specialists and septic professionals. “Make friends,” he said, referring to the development of partnerships among professionals – building inspectors, plumbing contractors – who work on water systems. “You are the link. Communicate what you have learned to the inspector or make sure it’s on the well record,” he added.

Wong also suggested well drillers consider adding water treatment and septic work to their list of services. “Imagine how that will up your game, if you can say you can do A, B, C and D,” he said.

Peter S. Cartwright, McElhiney lecturer and technical consultant for the CWQA, led a lively session on contaminants and treatment options. Cartwright went over primary standards, which relate to health, and secondary standards, which relate to esthetic qualities of water. Manganese is threatening water quality. Primary standards generally are getting tighter. He drew attention to manganese as a secondary contaminant that is likely to be added to the list of primary contaminants in the near future. Manganese can make water appear brown, red, orange, yellow or black. It is usually present where iron is present, and oxidizes, though not as easily as iron. It forms a black precipitate. Treatments include a combination of oxidation and filtration using a specialty filter medium such as Greensand Plus, and softening where manganese is found in low concentrations.

So many contaminants can’t be seen, tasted, smelled, he said. “Start with a good analysis.” He recommended Water Treatment for Dummies, which you can download for free at www.wqa.org/dummies) as a useful resource for those looking to get familiar with the processes and tools.

The trade show, which ran alongside the educational program, gave attendees ample time to talk equipment and products with manufacturers and suppliers. Six shiny rigs and trucks provided impressive focal centrepieces for drillers looking to upgrade their equipment and vehicles for transporting it. AMS brought its smaller-footprint Power Probe to the expo. Atlas-Copco’s TH-60 occupied a wide berth. Eloquip had on display a truck it designed for J.R. Wilson and Sons Well Drilling. Oak-Land Ford Lincoln Sales showed off its customized F-550 with a roller for easy loading and unloading. Wellmaster Pipe and Supply’s BT-32B pump hoist, designed for Well Initiatives, garnered a lot of attention. Drillers-cum-designers Simon and Donnald Massé of Montreal’s Groupe Puitbec brought their customized Nordic Drill DR-10-A, designed for hard-to-access sites.

Parts and tool manufacturers and suppliers and service providers were on hand on the show floor to provide information and guidance on their products. Show sponsors Franklin Electic, Grundfos, Berkeley, Pentair, Canpipe, Heron Instruments, Lackner McLennan Insurance and Rideau Pipe & Drilling Supplies, as well as a host of manufacturers and suppliers were on hand with their wares.

Josh Douma and Kevin Kopec of InSitu Contractors in Guelph happily posed with their Nordic Drill DR-10-A (they planned to take it home after the show).