Features News Mapping Research
Groundwater flow to Colorado River may decline by 1/3 over next 30 years: study 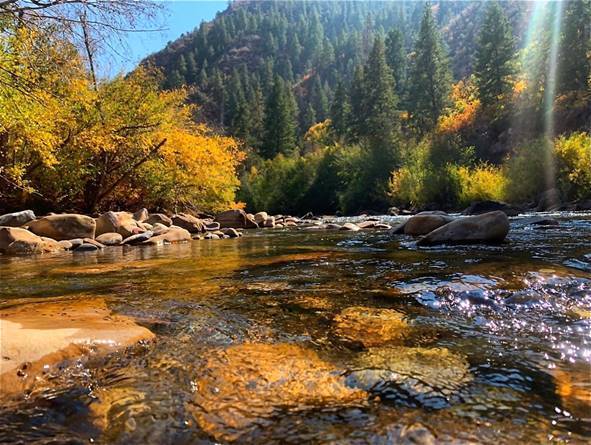 Reston, Va. – A new study projects that a hot and dry future climate may lead to a 29 per cent decline in Upper Colorado River Basin “baseflow” at the basin outlet by the 2050s, affecting both people and ecosystems.

Baseflow is the movement of groundwater into streams and, on average, accounts for more than half of annual streamflow in the Upper Colorado River Basin. It is vital for sustaining flows in the Colorado River during dry periods.Scientists from the U.S. Geological Survey and the Bureau of Reclamation modelled temperature, precipitation and runoff data to understand more about how baseflow may change under three future climate scenarios.

“Many studies project streamflow and runoff response to climate change in the Upper Colorado River Basin, but this is the first to look at the baseflow component of total streamflow,” said USGS hydrologist Olivia Miller, lead author of the paper. “Understanding how baseflow may respond to climate change is particularly important for water managers when it comes to ensuring sufficient water supply outside the spring runoff period and has critical implications for ecosystem health.”

The Upper Colorado River Basin has a drainage area of about 114,000 square miles, covering portions of Colorado, Wyoming, Utah, Arizona and New Mexico. The Continental Divide marks the eastern boundary of the basin whereas the western boundary is defined by the Wasatch Mountains. The Wind River and Wyoming Ranges form the northern border and the southern portion includes the San Juan Basin. From 1984 to 2012, total streamflow deliveries from the upper basin’s outlet at Lees Ferry, Arizona, to the Lower Colorado River Basin averaged 10.3 million acre feet/year (maf/yr). Baseflow accounted for nearly a third of this (2.8 maf/yr).

The study authors hypothesize that baseflow declines would occur due to increases in stream water loss from processes such as evapotranspiration. The largest declines in the model occur in the Rocky Mountains and in the headwaters of the Green River.

Declines in baseflow have major downstream and basin-wide effects in an area where water demand often exceeds supply. In addition to the 40 million people that rely on the Colorado River for recreational, agricultural, municipal, spiritual and hydropower uses, baseflow decline has major impacts on riverbank, water and land ecosystems.

“This region is experiencing exceptional drought conditions and record-low reservoir levels at Lake Mead and Lake Powell,” said Katharine Dahm, USGS Rocky Mountain Region Senior Scientist. “Information from this study can be used by resource managers to understand impacts of water shortages and develop mitigation plans for both people and ecosystems.”