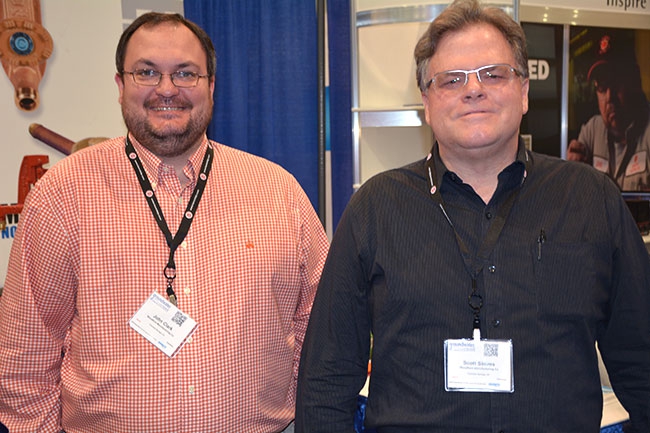 The National Ground Water Association’s annual expo this year expanded to become Groundwater Week, held in Las Vegas in early December. Held this year in conjunction with the Irrigation Association’s show, the conference and trade show had a rich context in water management and provided a forum for trends, products and business opportunities.

1. Help to streamline your back office
Rick Oberle ticked through the features and advantages of his Well Magic business administration software, which he designed especially for water well contractors to help corral many of their business functions, including job invoicing, estimating, performing advanced data searches and organizing job types and data.

Whichever software you use, Oberle said, it’s important it be location-based rather than customer-based to keep information current when properties change hands.

Common mistakes well contractors make include requiring customers to fill out complicated forms and relying solely on accounting software such as QuickBooks, he added. Oberle encouraged drillers to work with their authorities to upload documents they already have and prevent duplication of work.

2. Solar power potential
Jeff Frank, a product development representative from Franklin Electric, may have opened some contractors’ eyes to the potential of solar-powered pumping of water. Innovation has dramatically lowered the cost of solar power from about $76 per watt in 1977 to 30 cents per watt in 2015, Frank said.

Pump designers used to design pumps to use as little power as possible, he said. With costs down, designs can now be driven by water usage needs. There are a lot of opportunities not only in agricultural applications but among homeowners seeking alternatives to traditional types of power. These last are a growing potential customer base contractors can access through homeowner and real estate associations, he suggested.

3. Powerful message on food production
Peter McCornick, who heads up the Water for Food Institute at the University of Nebraska, delivered a powerful keynote speech on food security to attendees of both shows. Almost one billion people are food insecure, McCornick said, and with the population projected to reach 10 billion by 2050, there will be greater demand for water for higher-value water and water-intensive products, for example, dairy products and eggs. Water seems to get attention only when there is a drought, he observed, noting that it’s important to balance food and water security and conservation with providing agricultural jobs and small-farm livelihoods. McCornick said he is encouraged to see opportunities in rainfed and irrigated agriculture.

4. Volunteer power
During a breakfast presentation, the NGWA honoured Ross L. Oliver Award recipient Stewart Kraus and other dedicated contractors and scientists, for achievement of high-quality business standards and practices. Also warmly applauded were a truly impressive 360 volunteers, whose names scrolled down the screen like the credits from Star Wars.

The connection between food security and ground water and the ways in which volunteers can help improve both was brought home on the trade show floor. Matt Hamilton told us about the efforts of the Outreach Program in Iowa to get clean water to Tanzania and other spots where it’s needed through volunteer expertise, fundraising and the non-profit’s point-of-use 10,000-litre filtration systems, which are fed by gravity and powered by the sun.

5. A truckload of new products
Stephen Weinstein and Peter Reinhardt of Pentair showed Ground Water Canada two new pump series that will be available next spring under the Berkeley brand made for agricultural jobs and Matthew Servant announced a new Pentek Intellidrive variable frequency drive for large-horsepower jobs.

Brian Curliss and Phil Chatlosh of Proheat in Richmond, B.C., were on hand to describe the company’s 45,000-BTU coolant heater, which incorporates a J1939 bus and new operating modes aimed at saving battery power and fuel. The unit, which has different mounting options, may be used to preheat engines, heat chilly vehicle interiors and prevent fluids from freezing, Curliss said.

Still more Canadians were in the house. Stephan Vaillancourt and Luc Charland of GeoRocFor in Sherbrooke, Que., described some of the company’s overburden casing systems, including the V2.0, whose features include better percussion transfer, more surface impact, an improved locking system and a choice of crowns.

A new 1” & 1 ¼” Model 80DI VFD patented submersible pump check valve for use with variable-frequency drive control submersible pumps was on display at Flomatic Corporation’s booth. The valve is designed to minimize flow losses and hydraulic shocks that can cause failure in the pumping system when a VFD goes to low flow.

Cristina Windsor of In-Situ told us about new features of the company’s 100 and 200 water level meters, among them static and drawdown modes that let users switch from static level readings to drawdown mode for low flow and pump tests.

Lakos had a crowd gathered around its pump protection sand separator demo models for vertical turbine and submersible pumps. These can extend pump life by up to four times, and save contractors and homeowners repair, replacement and energy costs.

Porta-MAX had a portable Hydro-Frac system centre stage at the booth. The small two-speed system is self-contained and gives users fingertip control over flow range.

SiLibeads caught the attention of several show visitors. The glass beads, an alternative to gravel filtration, are the brainchild of German company Sigmund Lindner. Representatives said the zirconium oxide and zirconium silicate beads are more consistently sized and less prone to breakage and encrustation than quartz and gravel.

Bob and Cody Davis of MAASS Midwest told us about their Universal Hydrant Drain Box, which drains water from the bottom of the pump assembly to save installers the risk of going into the hole to drain the pump manually. After emerging from a well safely for the umpteenth time, inventor Bob decided to create a product to make the job safer: a compact box that drains the equivalent of nine square feet of washed gravel away from the valve body.

Educational sessions and innovations like these remind us the water drilling world is at least as much about human resources as it is about natural resources. Next year’s Groundwater Week will team up with the technical Groundwater Summit in Nashville, Tenn. So come out, y’all!