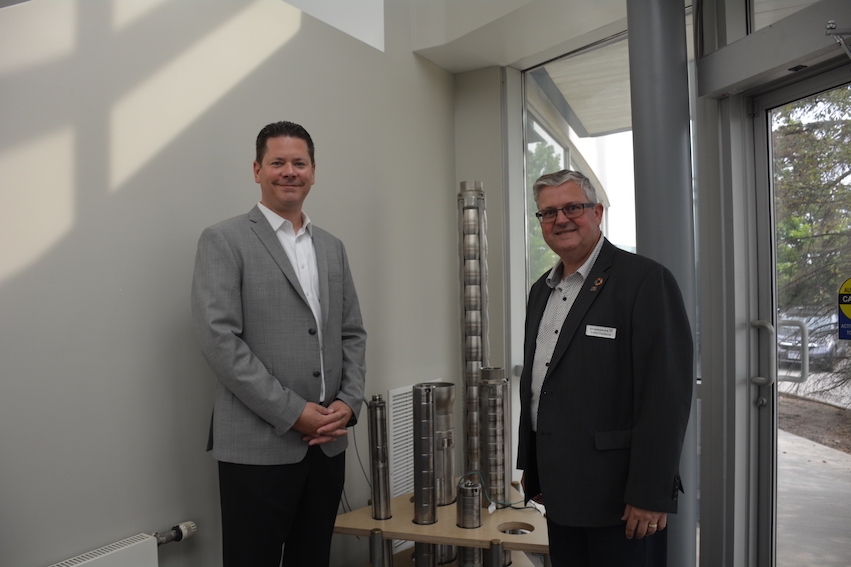 Dieter Sauer, regional managing director for the Americas, and Simon Feddema, president of Grundfos Canada, were on hand to announce an expansion that will more than double the Oakville, Ont., company's warehouse and service space.

Oakville, Ont. – On July 11, Grundfos Canada broke ground on a $3.5-million expansion of its Oakville location at 2941 Brighton Road that will more than double warehouse and assembly space to accommodate expected growth.

“This investment underlines our continued commitment to the Oakville community and will have a long-lasting impact on the local economy and beyond,” said a news release from the company, which was established in 1981 to distribute in Canada pump, motor and other products from Grundfos plants worldwide.

Grundfos Canada is the Canadian distributor of Grundfos products, some of which come from Denmark, U.S. and international Grundfos locations.

The company employs more than 100 people. The expansion of its current facility by Maple Reinders Construction will more than double warehousing and service capabilities to 48,000 square feet. This will enable the company to add new skilled jobs and apprenticeships. They expect to complete the work by July 2020.

The expansion is being done to accommodate $150 to $170 million in sales that is expected, said Simon Feddema, president of Grundfos Canada.

Dieter Sauer, regional managing director for the Americas, and Simon Feddema, president of Grundfos Canada, were on hand to announce an expansion that will more than double the Oakville, Ont., company’s warehouse and service space.

There are more than 30 outside sales staff working in their regions and 65 to 70 inside sales and assembly staff in the building, Yousufzai said.

The 20,000-square-foot warehouse, which does about $88-89 million in sales, will more than double to 48,000 square feet with the expansion. They’ll need that space to accommodate assembly and storage as they take on more orders, Yousufzai said.

Production and assembly staff work in the warehouse, where 30 to 35 per cent of products is assembled and the remainder comes to them boxed from other company locations.

Grundfos opened its doors in Canada in 1981 with a small sales office reporting to the U.S. company, Grundfos Pumps Corporation. In 1988, Grundfos set up a distribution centre of 4,000 square feet in Mississauga, Ont., providing inventory, order entry and repair service. Grundfos Canada Inc. was established on May 1, 1992, with nine employees, and moved to its current location in early 1997.