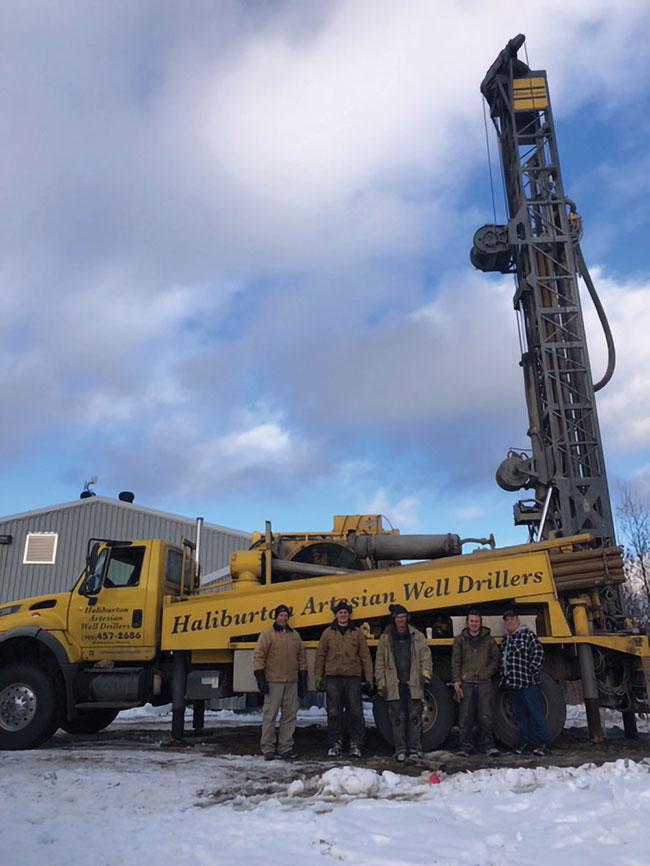 Kyle Smith, Jake Woodward and a determined team of drilling volunteers and industry donors are helping to make sure the fishing is good in Ontario’s cottage country.

Kyle, who heads up Aardvark Drilling’s location in Carleton Place near Ottawa, and Jake Woodward, co-owner of Haliburton Artesian Water Wells, and his team, are volunteering their time, expertise, equipment and supplies to replace a dry well at a community-run fish hatchery and they’ve had help from several supplier to help them get it done so that the hatchery can once again run at full capacity.

For two decades, the Haliburton Highlands Outdoors Association has operated the hatchery, which receives fingerlings and raises them to stocking size to increase their survival success rate. Last year volunteers stocked the lakes with 34,000 fish.

Recently one of the wells went dry at Ontario’s largest community-run fish hatchery near Haliburton, Ont.

There is a lot at stake. “The well we are operating now is the best of our three wells,” explained Daniel Smith, who has volunteered at the Haliburton Highlands Outdoors Association fish hatchery for six years and recently became its president. “We pump water 24-7. If our good well goes south, we need backup. Unfortunately, the pump in the main well gave up the ghost, then we put number 2 into service, but it soon ran dry. We can’t go half an hour without pumping water into the fish tanks. The recovery of that well after it went dry was just horrible. It goes dry after about a minute.”

The Pump Shop in Haliburton checked out the pump in number 2 and the power readings were good, he said. “So now we knew had a well issue.”

The hatchery’s claim to fame is raising Haliburton Gold lake trout from egg collection in the wild where only one or two eggs per 1,000 survive to eight inches due to natural predators. The hatchery’s rate of survival is 650 out of 1,000. The eight-inch trout are then returned to the lakes.

Daniel explained: “In 1998 scientists discovered a particular species common to Haliburton County and found nowhere else in the world. These fish were trapped in the region during the glacial age. They are small but grow quickly and so are good for rehabilitating lakes that don’t usually do well.”

In co-operation with the Ministry of Natural Resources and Forestry, volunteers go to the shoals of Redstone and Halls lakes where the trout lay their eggs. “We net them, separate the male and female, squeeze the eggs, fertilize the eggs, raise them starting in October and 18 months later we stock the lakes,” he said.

“We have a 60 to 70 per cent success rate – and that’s what we sell to the Halls Lake Property Owners Association. We’re actually helping the fish population. In a banner year we’ll put more back in.”

The association is a tight ship run by volunteers and one “very part-time” staff member in the office. Normally, they make a small amount of money from hall rentals, but that ground to a halt this year due to COVID.

Daniel Smith, who has fished and hunted all his life, started volunteering for the association when he retired from a career in corrections nearly five years ago. He is not only a dedicated volunteer but also Kyle’s father.

A partnership is born

“This all came together in late November,” Daniel said. He learned from local driller Pat Casey that Rick Ruttig, founder of Haliburton Artesian Water Wells, had drilled the original wells at no charge in the early 1990s. Daniel left a message with Jake Woodward, current co-owner of the drilling company with Dave Walker. While waiting for Jake to call back, father told son about the situation. “At first we thought the well just needed to be jetted, but it turns out the well was enclosed in a pump house so you couldn’t get the equipment in close enough,” Daniel said.

It made sense to drill a new well, but it was an expensive proposition. “Kyle wanted in on it,” Daniel said. “He said Aardvark would supply the pump and other supplies. After my jaw dropped, I said, ‘Are you sure?’ ”

Kyle and his family have enjoyed the hatchery’s outdoor exhibits and Turtle Guardians educational program over the years. “We’d go feed the fish, do morning and evening feedings, check the water rates and quality,” he said. “Whenever we have the time, we stop in.”

He shared his dad’s concern. “In wintertime, that’s when they fill the hatchery to capacity. They need more water. We got hold of Jake, and he was more than happy to drill the well, but it’s a costly undertaking,” Kyle said.

He described the project as “an evolving beast.”

Rideau Supply provided screen at cost and covered shipping, Wellmaster delivered 90 feet of casing directly to the hatchery at no charge. Haliburton Artesian supplied the drill rig and labour, and Canpipe donated poly, wire and fittings. Aardvark Drilling Inc. is coordinating donations and purchasing the screen. The Pump Shop will take care of pump installation.

“The well was drilled on Dec. 22, 2020,” Daniel Smith reported. “The guys actually hit water at 10 feet and we ended up with a 40-foot well with 10 feet of screen installed. At the end of the day the well was producing 30 gallons per minute, which will supply our water needs nicely. We hope to have the pump installed and this well supplying water to the hatchery the first week of January.”

Aardvark will donate a 1.5-horsepower pump. The Pump Shop will install the pump, hook up to the hatchery water supply, which will include trenching with their excavator, possibly heat tracing into the pump house, plumbing and electrical work – all at no charge! The work was expected to be complete by mid-January.

“In our industry 90 per cent of people love fishing. You need to have fish to fish,” Kyle said. “It’s neat because everyone involved with this project is an OGWA member, including the hatchery.”

“We do what we can to help out the community,” Daniel said. “It’s a struggle to keep this place afloat, so when guys like these come forward, it’s great.”

To help maintain the hatchery’s other wells in future, call Daniel Smith at 705-457-5417 or email dbsmith@bell.net.