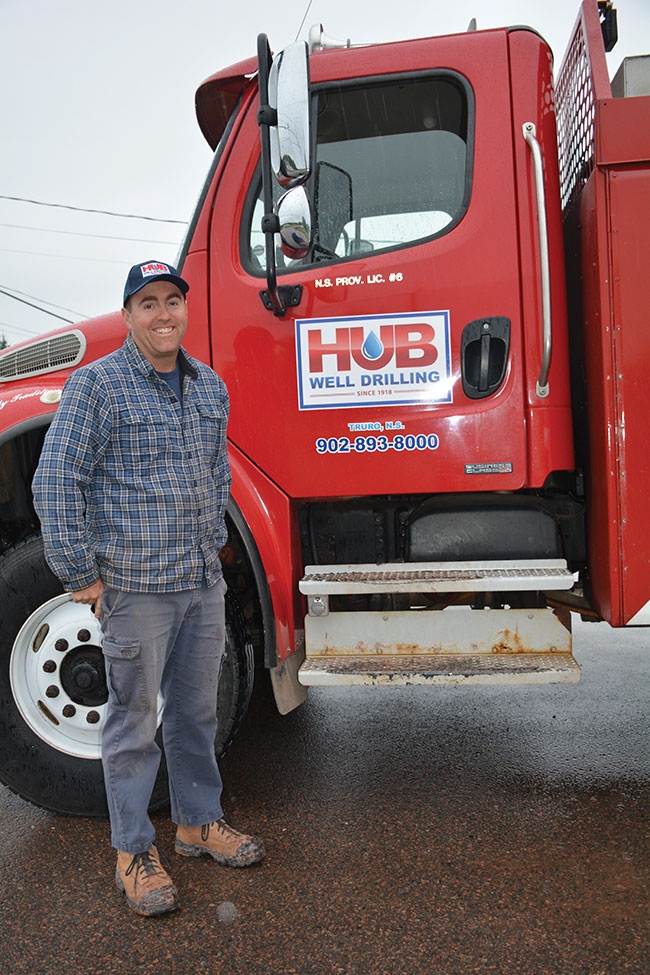 My visit to Hub Well Drilling Ltd. on a rainy September morning near Truro, N.S., begins with a tour around the business office, shop and storeroom, and a lively chat with owner and operator Brian Johnson.

Johnson, 35, is enthusiastic and keen to talk about the family business. As he talks his early-morning energy ramps up and it’s obvious he loves the work.

The rest of the team files in, including his wife, Allison, and father, Greg, who represents the third generation of the business, I sense a definite family vibe.

This business has been helping people in Colchester County – and neighbouring Cumberland, Halifax, Hants and Pictou counties – find water for 100 years.

Hub didn’t always go by that name. In 1918, founder Oran Johnson, Brian’s great-grandfather, established it under the name O.S. Johnson Well Drilling. His son Ivan became involved in the business starting in 1945. When Ivan died in 1986, his own son Greg took over the business. Brian, Greg’s son, has led the business since early 2014.

Greg is still very much involved in the day-to-day business on the frontlines fielding calls and questions from customers.

A licensed driller and pump installer since 2006, Brian also has under his belt a bachelor’s degree in business administration earned at St. Francis Xavier University in Antigonish in 2005.

He thinks his business degree emboldens him to try technology and he applies other aspects of his business education to his work in the ground water industry.

One example of this: Allison, their administrator has been entering years worth of old well records into a database so they will be able to locate them more easily if an issue arises.

GPS coordinates are submitted to Nova Scotia Environment on well logs, but since wells are no longer buried, they are mainly used for reference.

“He has a phenomenal memory” Brian says, referring in part to his father’s ability to recall well locations and details of many jobs over the years. “People think they remember their well details, but they often miscalculate,” he adds with a laugh.

They are busy from May to December doing mostly residential work, and also some commercial and municipal work. Agricultural wells for livestock are also fairly regular. They work frequently at dairy and chicken farms servicing pump systems and drilling new wells, Brian says.

Hub’s current shop, a cheery red building on Salmon Road, was built in 1994, just down the road from the business’ first location. A framed photo of their flagship and other firsts, such as the horsedrawn rig Oran built, brightens the walls of the customer reception area.

Equipment over the years has included a horse-drawn machine, two cable-tool drills, and their first rotary in 1973. They now have two rotary Reich drills, along with two 1500 gallon water trucks, and a service vehicle. The service truck has a boom on it for pulling large pumps; they also have a tracked pump puller for pulling smaller pumps.

Peeking into the storeroom on our tour, I see Brian’s pump installer side take over. “We like to keep a lot of parts in stock,” he says, which they need for new hookups, system improvements, constant pressure upgrades or emergency repairs.

They do geothermal installations as well, installing the “loop” portion of an open loop.

‘YOU’RE ALLOWED TO ENJOY THE SHOW’
They are equipped to drill six-inch to 20-inch diameter holes. They offer well owners a written contract with a one-year guarantee.

Taking seriously their roles as educators, he says they have a rule for customers: “You’re allowed to enjoy the show,” he says with a laugh, adding that he will stop the rig and chat with well owners about where they are in the process. I know he means what he says when he invites me to visit their drilling site that afternoon and takes time to explain what’s happening with the well – I was lucky to see they’d begun to get good water.

FUTURE OF THE INDUSTRY: EDUCATION
Like his father before him, Brian is involved with the Nova Scotia Ground Water Association. Greg has served as president, while Brian currently serves as vice-president and director of the pump installers division.

The younger Johnson enjoys being involved in the political side of the industry. “It’s important to have a voice,” he says, adding that he used to work on a Nova Scotia Environment advisory board with other stakeholders, such as waste waster professionals, involved in residential matters giving feedback to the government on the structure of regulations.

This kind of co-operation is key to getting things done, he says. The same kind of sharing of information happens at association conventions such as the one happening down the road from Hub at the Atlantic convention. “Networking is good, it helps us solve problems.”

A big advocate of learning, Brian wants to see industry move to a higher standard.

“Maybe the industry used to be a bit combative – the new generation may be less so,” he says thoughtfully.

That often comes up during pump installer meetings, Brian says, as it does with unlicensed drillers though to a lesser degree. “Why are we going through all this certification if others who don’t can win the jobs?”Many licensed installers often voice their concerns.

In order to operate at the highly professional level he would like to see, drillers and pump installers have to be able to charge customers an appropriate amount to cover the costs of drilling a well properly, including costs to maintain equipment, the fluctuating costs of material such as casing – which at the time of my visit had jumped up in price by $4 a foot immediately after the U.S. imposed tariffs – and fees needed to earn continuing education points.

“Nova Scotia has continuing education points,” he points out. “Contractors have to acquire 25 points per year, and everyone is always working to keep up their points.”

It’s clear he believes in the power of educating the public as well, and there is evidence of this on the company website. A “Water Talk” section provides information from Environment Canada on water well drilling, choosing a website and other topics. Videos showing drilling jobs and techniques are updated regularly: he has connected the company website and social media pages, so that when videos are posted on Instagram, they automatically appear on the company website and Facebook feeds. “That’s one area where my business training has helped me,” he says.

On the future of the industry, he says, “Walkerton raised awareness. There’s nothing more important than water and its importance is going to become more and more of an issue. There is going to be a bigger need for ground water as time goes on.”

“As the population grows, water is going to be in shortage. We’re fairly fortunate here but you see in the southwestern United States they’re into a water crisis. The cost associated with drilling wells is only going to go up but the need for it eventually will go up too. Especially in Nova Scotia there is such a broad rural area that it’s not really feasible to put in any kind of infrastructure to serve the public supply – the logistics of it are too hard to do it.”

“And there are fewer and fewer people doing the work,” he says.

HUGE CHALLENGE: HIRING AND RETAINING
Hub is blessed with great employees, Johnson says. John Chapman has been part of the team for more than 10 years, and Wayne MacLeod has been with Hub for about two years. Well technician John is working on getting licensed as a pump installer; driller’s helper Wayne primarily works on the rigs.

But finding and keeping staff long term remains a challenge. Most needed are people with a clean Class 3 driver’s licence, he says. “And all tradespeople struggle to find self-motivated people – someone with the right attitude,” he says.

Attracting good people requires paying them well, and therein lies the rub. “Our challenge lies in finding good people and paying them accordingly,” Johnson says. “I think our prices are going to have to reflect that over time. The large overhead we have now, it’s not just a couple of trucks, as it was in the early days, but proportionately now, it’s a huge amount of dollars people have tied up in their equipment.”

It’s clear the future of Hub Well Drilling is promising, built as it is on a solid foundation of integrity, community involvement and many repeat customers, some of whom remember Brian’s grandfather, Ivan.

“I credit my dad with giving me my start and pointing me in the right direction,” he says. “It’s great to be able to come into a well-established business and kind of put my stamp on it.”