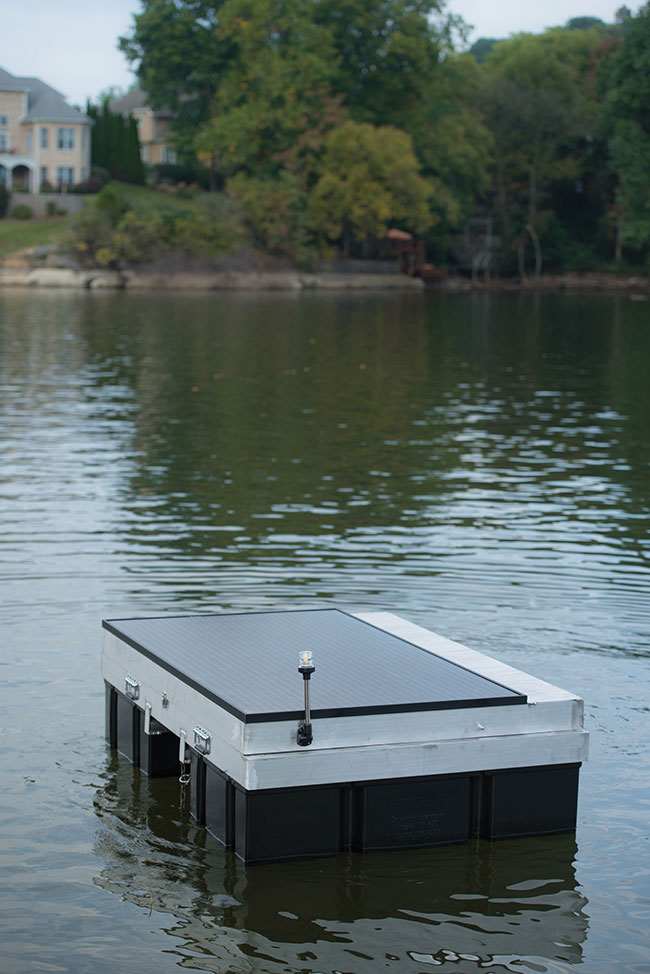 The WaterIQ technology at work on a pond, keeping it algae-free. Photo credit: WaterIQ

When excess nitrogen and phosphorus in fertilizers are allowed to run off into water bodies, the heat of the season helps to form harmful algae blooms.

Nutrient pollution has become more of an issue over the past decade or so.

Unlike green algae, blue-green algae release a toxin that is harmful to humans. Traditionally, it is eradicated by chemical use – copper sulfate – but the algicide often goes beyond its intended target and kills beneficial bacteria in the water, creating a long-term detrimental effect.

The company uses ultrasonic technology that targets algae’s gas vacuoles, making them dormant. Algae subsequently sinks to the bottom of a water feature where beneficial bacteria decomposes the organism within a day or two.

While playing a round of golf one day in Wyoming, Field witnessed first-hand the technology at work on a pond that was plagued with a serious algae problem. The golf course superintendent explained he couldn’t use chemicals to solve the problem due to the area’s environmental sensitivity.

Semi-retired at the time, Field purchased the company that distributed the product, already having had some familiarity with ultrasonic technology. He previously used the science to detect anomalies in oil and gas pipelines during his earlier career as the operator of a large pipeline inspection business.

After having acquired the distribution company, he oversaw an upgrade of the product and its technology with the assistance of acoustical engineers, electrical engineers, chemical engineers and customer feedback. A prototype of the improved product was introduced last year during a conference for the wastewater treatment industry and was officially launched in February.

The environmentally friendlier alternative to algicides is an appliance that is placed in water and emits 2,056 ultrasonic frequencies every 36 minutes over a 360-degree radius. It sends power through a circuit board on the appliance’s piezo – its primary material – and the frequency acts in a scientific process called critical structural resonance.

Field compared the effect to that of an opera singer who, delivering the right pitch at the right decibel level, can cause crystal glass to vibrate and shatter.

The sound waves target only the algae but doesn’t result in an explosion of the organism.

For algae to thrive, it requires photosynthesis and must rise up and down in water every 24 hours. As algae sinks to the bottom, it decomposes, “and that’s the essence of what our technology does,” Field says. “It destroys these gas vacuoles inside the algae, and it sinks, and we’re seeing great success killing the blue-green and green algae without the use of chemicals.”

Biofilm issues
The ultrasonic technology addresses biofilm issues in addition to killing algae. Biofilm tends to accumulate around the edges of clarifiers in treatment plants. Emitted ultrasonic frequencies go in pulses. The pulsing action causes an almost artificial turbulence which “fakes” the biofilm into feeling it won’t colonize because it emulates running water. Once wastewater treatment plants or utilities are cleaned out – with clarifiers cleaned monthly or every second month – the appliance is installed. It eliminates growth of the biofilm which often attracts algae.

Treatment plants and utilities are embracing the technology, Field says.

Algae blooms have been increasing steadily around the world every year because of climate change, he says, and it’s becoming an epidemic.

“It seems to be growing faster each year, and we’re seeing it occur earlier every year. The warmer the weather, the more we’re seeing outbreaks of algae.”

Field says California is seeing algae growth in February and March rather than April or May when it traditionally begins. Climate change hasn’t only resulted in warmer temperatures, it has led to extremes in weather. He says drought has triggered algae growth increases because recycled water is being used for irrigation and is applied to areas that already have algae in the water. Changes in salinity have also occurred because of climate change, and is contributing to the growth of algae, he adds.

As sea levels rise, ocean water is dumping algae into estuaries and subsequently reservoirs, which are impacted by runoff nitrogen and phosphorus in fertilizer.