Hilary Johnson, an MIT doctoral student, who just won the Lemelson-MIT Student Prize, has invented a new kind of centrifugal pump (called a “variable volute” pump) that does something engineering experts previously thought was impossible – it physically adjusts to more efficiently move water based on immediate need, resulting in energy and cost savings. 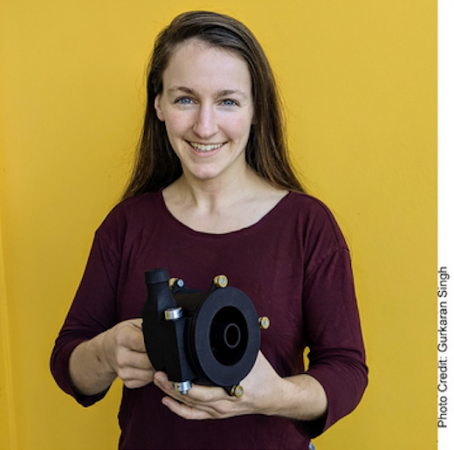 The five per cent energy improvement over the lifetime of a pump is a huge savings considering the hundreds of billions of kilowatt-hours they consume, Johnson explains in a fact sheet for the Lemelson-MIT competition.

The technology of hydraulic pumps is rarely considered in the drive to meet green technology goals due to inefficiency, Johnson says. “That’s a big missed opportunity because hydraulic pumps move water in every aspect of our lives.” Pumps consume six per cent of electricity in the U.S., much of which is wasted because pumps can’t adjust to meet variable flow demands, she adds.

The young inventor believes variable volute pumps show the potential to significantly improve efficiency and operating range across applications by adjusting the spiral fluid passages to match the flow rate.

Johnson developed this technology in collaboration with Xylem, Inc.

Watch a short video of Johnson describing her invention: the variable volute pump.