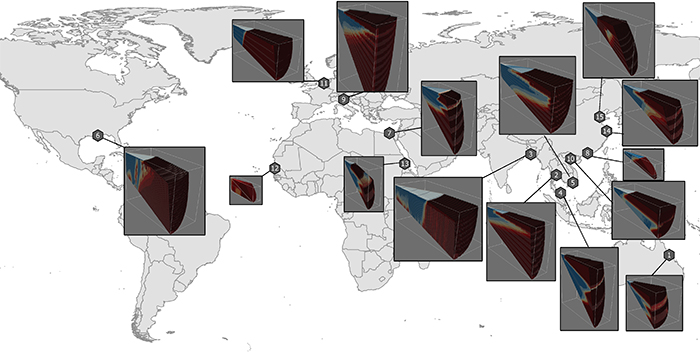 Utrecht, Netherlands – Research by hydrologist Joeri van Engelen of Utrecht University explores fresh-saline groundwater distribution in vulnerable deltas around the world, including the actual size of these fresh groundwater reserves and the factors that control them.

Van Engelen assessed the status and drivers of the present-day salinity distribution in groundwater in deltas, Utrecht University announced in a news release.

These areas are often densely populated hubs with intensive agriculture due to fertile soils and have excellent transportation possibilities via ports. Though traditionally depending mainly on surface water to meet freshwater demands, their growing population and intensifying agriculture increasingly rely on groundwater extractions. These extractions will lead to more salt entering the groundwater system, reducing the deltas’ precious fresh groundwater reserves. Despite the increasing importance of these reserves, little is known about the actual size of these fresh groundwater reserves and the factors that control them. Van Engelen’s PhD thesis aims to contribute to a better understanding of the fresh-saline groundwater distribution in these vulnerable areas.

Van Engelen applied computer models of groundwater flow and salt transport, using the national supercomputer in Amsterdam. It was found that the present-day fresh-saline groundwater distribution in deltas was formed over thousands of years, and thus very computationally demanding simulations were required.

He investigated the sustainability of the fresh groundwater reserves in 15 major deltas across the world. With the current amount of groundwater being pumped, the Ganges-Brahmaputra-Meghna (Bangladesh), Nile (Egypt), Pearl River and Yangtze delta (both in China) risk exhaustion of their precious reserves this coming century. With expected increased pumping rates, the Saloum (Senegal), Mekong and the Red River delta (both in Vietnam) can be added to this list. These seven deltas together currently host hundreds of millions of inhabitants, whose lives might be seriously affected by this groundwater exhaustion.

Van Engelen will defend his PhD thesis at Utrecht University on Nov. 23.