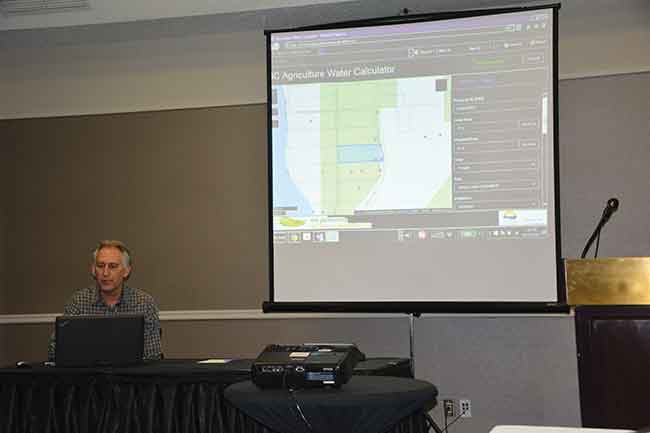 The B.C. agriculture ministry’s Ted van der Gulik outlines the BC Agriculture Water Calculator at the BCGWA conference in March.

Technology is being introduced every year in every sector in all corners of the world – and ground water is no exception. Here is a roundup of some of the newest emerging technologies that are making it easier to extract and measure ground water quality and quantity at the source and on its way to the consumer.

Water Calculator
In early 2016, British Columbia began requiring all non-domestic well owners (including farms) to obtain a licence to withdraw water. This totals about 20,000 licences. The quantity connected to the licence is being determined using an online tool called the BC Agriculture Water Calculator. The database for this tool is being generated using the Agriculture Water Demand Model (AWDM), a model that’s been shown to provide consistent and reliable annual volumes for licence requests.

In the future, similar tools may be developed in other jurisdictions, but B.C. government media spokesperson David Karn says the AWDM that underlies this particular calculator tool is only operational for British Columbia. “To produce a similar model for other regions would be a significant undertaking,” he explains, requiring climate, soils and irrigation demand models to be developed first.

Also in B.C., ground water “budgets” have been developed for five locations. Karn describes these budgets as a characterization of ground water movement between aquifers and hydraulically connected streams to assess potential impacts from pumping on surface flows. “The water budgets will provide a preliminary assessment of available ground water for allocation and monitoring recommendations for sustainable management,” he says.

Water level instruments
Going inside the well, B.C. Ground Water Association general manager Kathy Tixier notes that new technology is making monitoring water levels a lot easier than it used to be. “The newer sensors can communicate with smartphones without having to be yanked from the hole or can send data telemetrically via radio or cell signal so you don’t even have to visit the site,” Tixier says. Georgetown, Ont.-based Solinst has offered one of these tools (the Levelogger, newest update 2011) for many years, and in June launched the AquaVent maintenance-free vented water level datalogger. Jason Redwood, vice-president of marketing, says this tool measures water temperature and level by calculating pressure over time. It is barometrically compensated, uses replaceable batteries in the wellhead and features permanent desiccants.

Milwaukee, Wis.-based Wellntel, launched last year, allows well owners to measure current water level and water level over time, with the ability to compare current information to previous periods and other factors like rainfall. Wellntel is described as a communication gateway about ground water using information from one or more sensors or many other related sources, available securely to customers in an online database. Wellntel chief technology officer Nicholas Hayes says that since Wellntel was launched, it has enabled customers to gather “more ground water level data in the U.S. than all federal and state agencies combined, taking over two million readings in 18 states and two Canadian provinces.”

Japan-based Nagaoka offers various services and ground water intake technologies using its own manufactured screens, which are now about to be launched in North America. Compared to conventional meshes and perforated plates, Nagaoka screens have a rigid clog-prevention structure designed to withstand temperature and pressure, an adjustable slot size and a range of shapes from cylindrical to flat. Spokesperson Yamada Katsuhiko says the screens can be applied in gallery, radial and collector wells for unconfined ground water intake, as well as in deep well artesian ground water intake applications.

Water quality
Nagaoka is also about to launch its extremely rapid and chemical-free revolutionary ground water treatment technology in North America. Nagaoka’s Katsuhiko says CHEMILES is already sold in seven countries, with two demonstration sites in the United States currently in place. CHEMILES has been approved for removing the following from ground water: iron, manganese, ammonium nitrogen and health-related contaminants of hexavalent chromium and arsenic.

Wisconsin-based Badger Meter has just released the E-Series Ultrasonic Plus meter. It incorporates an integrated shutoff valve into the lay length of the meter and features a patented three-state flow restriction valve that enables opening, closing and partially closing from other locations.

U.S.-based In-Situ released the Aqua TROLL 600 water monitor this year, which features a mobile app and works in both fresh and salt water. There is a sub-two-inch passive and active antifouling system for all sensors including conductivity, notes marketing manager Janice Hiller. The battery life is nine months. “Offered in vented and non-vented options with customizable cable lengths, this flexible instrument has wet-mateable connectors and universal ports, allowing custom sensor configuration for each site,” Hiller says.

In the past year, A.U.G. Signals Ltd. has further advanced its TRITON online water quality monitoring system, by enabling a 40 per cent reduction in energy consumption and a 50 per cent reduction in annual maintenance time. “TRITON’s contaminant list has also been upgraded to include chromate, manganese, ammonia, sulphate, colour, TOC, phenol, BETX, formaldehyde, UV 254, TSS, and more, which makes the system even more suitable for areas where the ground water is a primary source of drinking water,” senior project manager Cindy Dongxin Hu says.

Heron Instruments is a Hamilton, Ont.-based manufacturer and supplier of high-quality water level meters, interface meters and data loggers that has just released a new, affordable, full-featured borehole inspection camera. Spokesperson Terri Kernaghan says the Dipper-See is integrated into a singular unit, ideal for viewing in open bodies of water, wells, drains, sewers, boreholes and narrow tubes from one inch in diameter. It has a pressure rating of up to 300 metres.

New also this year is the Real Nitrate Analyzer from Real Tech in Whitby, Ont. “Nitrates have a natural peak at around the 220-nanometre wavelength,” Real Tech Applications research scientist Kerim Kollu explains. “Common interferences with the nitrate measurement at 220nm include organics and turbidity or suspended solids. However, [our] proprietary algorithm uses chemometric methods to compensate for these potential interferences using spectral absorbance data from hundreds of individual wavelengths of light.”

In comparing them to the other nitrate analyzers on the market, Kollu says Real Tech’s stand apart in the superior accuracy of their custom onsite calibrations, which account for site-specific water composition variations. In addition, the device’s automatic chemical cleaning system helps ensure accurate readings.

MANTECH in Guelph, Ont., is now distributing the PeCOD organics treatment and oxidation measurement system. While the instrument has been in the market for about eight years, MANTECH research and development manager Stephen Moore says there has been a recent shift towards using the PeCOD in wastewater treatment facilities and for onsite ground water testing instead of just in labs. The PeCOD uses a nano technology titanium dioxide sensor and ultraviolet light to oxidize the organics in the sample and to directly measure the amount of oxidation in 15 minutes or less.

The B.C. agriculture ministry’s Ted van der Gulik outlines the BC Agriculture Water Calculator at the BCGWA conference in March.

Tech outlook
In terms of what’s coming down the pipe, Chad Petersmeyer, hydrogeologist at Thurber Engineering in Victoria, B.C., and a member of the BCGWA, believes a hot tech area will be devices that quantify the connections between surface water and ground water. These, Petersmeyer notes, will be needed by regulators for allocation of water licences in B.C. and wherever else they have similar regulations.

“For data collection, it may involve better understanding of stratigraphy, such as using methods like sonic for drilling to get better samples, or hyporheic zone dynamics, for examples temperature measurements using LiDAR,” he says.

Petersmeyer says new technologies would also be welcome for simple and cost-effective tracer and isotope testing, and for virus detection as well. “I’m hearing more about PCR (polymerase chain reaction) testing for this purpose,” he notes.

Water from air
Let’s end with some technology that seems to be from the future, but has already been created. Simon Fraser University Professor Majid Bahrami has spent the past three years working with his grad student Farshid Bagheri to create the patent-pending Hybrid Atmospheric Water Generator (HAWgen). This amazing technology generates clean drinking water from the atmosphere through the integration of sorption, refrigeration and filtration systems. The system provides water generation even in hot and dry conditions and can be run using both waste heat and renewable energy sources.

The incoming air stream is preconditioned using an adsorption system and then channelled into a refrigeration unit for condensation. The gathered water is then filtered. The prototype can apparently generate up to five times more water per day than conventional atmospheric water generation systems, and will be marketed through Bahrami’s company Watergenics.