OGWA members came together to learn, network and collaborate 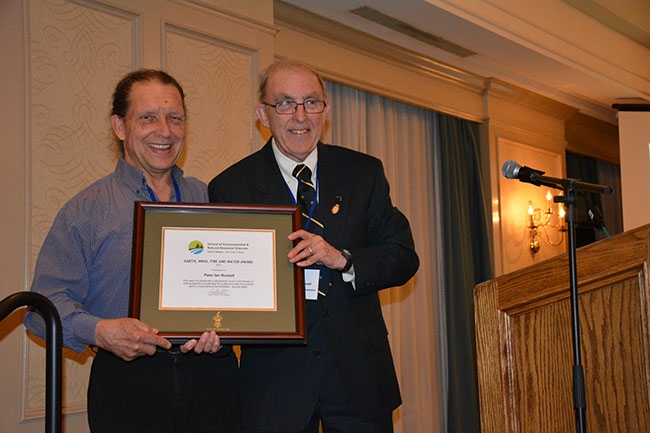 Hydrogeologist Bill Clarke presents the Earth, Wind and Fire award to Prof. Peter Russell, a key member of the University of Waterloo’s department of earth and environmental sciences, founder of the Earth Sciences Museum in 1967 and author of children’s books about ground water.

The Ontario Ground Water Association drew a good crowd for its annual convention and general meeting at the tranquil Nottawasaga Inn, Resort and Conference Centre in April.

This year the event was held immediately following a regional training meeting on best practices.

Friday was training day, with more than 80 members attending to get up to date on best practices.

A silent auction run by OGWA staff Anne Gammage and Debbie Stojkovic that began at the Friday night meet-and-greet had members vying with unidentified bidders for everything from maple syrup to water-level meters to a day’s excavator rental. The auction featured donations from Canadian Pipe, Franklin Electric, Wellmaster Pipe & Supply, Pompco, Atlas Copco, the Rideau Group, and many others.

Saturday morning was given over to division meetings and the annual general meeting, with president Darren Juneau presiding for the last time before the end of his term. Juneau received an enthusiastic round of applause for his energetic leadership.

Collaboration seemed to be the unofficial theme of the convention. The association is close to formalizing a partnership with the Canadian Water Quality Association and the Ontario Onsite Wastewater Association that will see the three organizations, which already work together on pertinent issues, collaborate and share information. In an initiative spearheaded by Johnny Wilson, the OGWA is also working on a partnership with the University of Windsor’s earth and environmental sciences department aimed at reaching out to the next generation of scientists.

Ellaline Davies of Safety Works Consulting went over the Ontario Workplace Safety and Insurance Board’s new rate framework model and took general questions about requirements. The framework, which Davies expects to take effect in 2019 or 2020, is meant to reward contractors who hold clean records for three years by setting rates based on performance.

Hydrogeologist Bill Clarke presents the Earth, Wind and Fire award to Prof. Peter Russell, a key member of the University of Waterloo’s department of earth and environmental sciences, founder of the Earth Sciences Museum in 1967 and author of children’s books about ground water.

Following this well-attended session was an earnest discussion about collaboration between drillers and the scientists and engineers they work with. Such issues as worksite delays, the importance of site meetings and the need to reach out to the next generation of hydrogeology and engineering students were discussed.

“That was the most productive meeting I’ve seen in a few years. It was really good,” longtime driller and past president John Wilson told Ground Water Canada that evening during the awards dinner.

But perhaps the highlight of the evening was Prof. Peter Russell’s reading of his children’s book, Wally & Deanna’s Groundwater Adventure, as images displayed on the big screen. Prof. Russell, who was presented with the Earth, Wind and Fire award by hydrogeologist Bill Clarke, invited children in the audience to come up to the front and demonstrate – by wriggling energetically – how a drop of rain water “percolates” through gravel, sand, silt and rock.

Afterwards attendees of all ages thronged the author afterwards for autographed copies of his books.