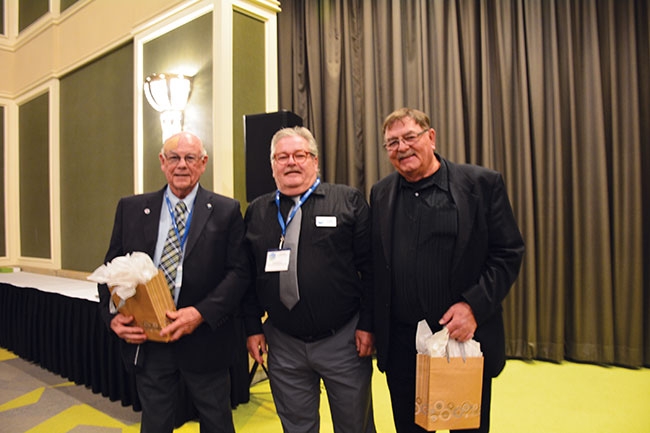 Executive director Craig Stainton (centre) presented John Wilson, of J.B. Wilson and Son Well Drilling, and Clark Watson, of G.H. Hart and Sons Well Drilling, with a joint Tenacity Award for longtime attendance at the annual convention. The two are known affectionately as the Bobbsey Twins.

Wilson, of J.B. Wilson and Son Well Drilling, in Springfield, Ont., told an audience of water well contractors, suppliers, scientists and engineers that he will listen to their issues and concerns, work diligently to address them, and lead the association in advocating for and educating the public about the ground water industry.

Scott King, president of the National Ground Water Association, in his address to the annual general meeting earlier that day, echoed that willingness to work with all professionals in the industry to further their interests and to strengthen the ground water industry as a whole. “Working together is our mandate,” he said. The NGWA is a large U.S.-based association of which the OGWA is an associate member.

The two-day event began on Friday, March 22, with a continuing education training course for credit followed by a trade show and reception in the atrium of the Best Western Lamplighter Inn.

Saturday morning was given over to division meetings and the AGM along with more opportunities to visit suppliers’ booths, including Grundfos’ popular virtual reality competition that challenged contractors to test their driving skills and pump knowledge.

During the AGM, Jim Smith, Fleming College liaison and professor of Fleming’s drilling and blasting program in Lindsay, Ont., thanked the OGWA for its donation of scholarship funds raised at the association’s annual golf tournament in September. Smith updated members on the college’s activities, among them development of a post-graduate new initiative that gives high school students volunteer hours in exchange for promotion of the drilling program to their classmates.

Executive director Craig Stainton (centre) presented John Wilson, of J.B. Wilson and Son Well Drilling, and Clark Watson, of G.H. Hart and Sons Well Drilling, with a joint Tenacity Award for longtime attendance at the annual convention. The two are known affectionately as the Bobbsey Twins.

A silent auction featured a wide array of donated items, including rental of an Epiroc rig, a utility cart from Wellmaster and an interesting steampunk-style lamp donated by Rideau Pipe that turned some heads. Proceeds from the auction help support the association.

The highlight of an elegant dinner and awards ceremony was a presentation by Joel Gagnon, professor and head of the earth sciences department at the University of Windsor. Gagnon and his students have been investigating water-well turbidity and other quality issues associated with wind-turbine construction in the Chatham-Kent, Ont., region.

Some 40 rural property owners on Bay Line Road in the county have reported problems with their water wells since wind turbines were constructed. A citizens group called Water Wells First drew attention to those problems starting in 2017. The investigation Gagnon led focused on two of those wells and has revealed significant information. Although there are clearly quality issues it is still not known if those issues – among them the presence of metals in the shale of the Kettle Point aquifer – are a risk to human health, for example, if there is an inhalation hazard. Gagnon walked a very interested audience through a slide show describing the diagnostic steps the team has taken to pinpoint the issues.

Two longtime attendees, known affectionately as “The Bobbsey Twins” were given the Tenacity Award to recognize their interest in and support of the industry. Friends Clark Watson, of G. Hart and Sons Well Drilling in Fenelon Falls, Ont., and John Wilson, of J.B. Wilson and Son Well Drilling, in Springfield, Ont., happily accepted the award together.

The Archie Watt Award went to outgoing president Bryan Watson, of G. Hart and Sons, who thanked members for their support during his time as association president.