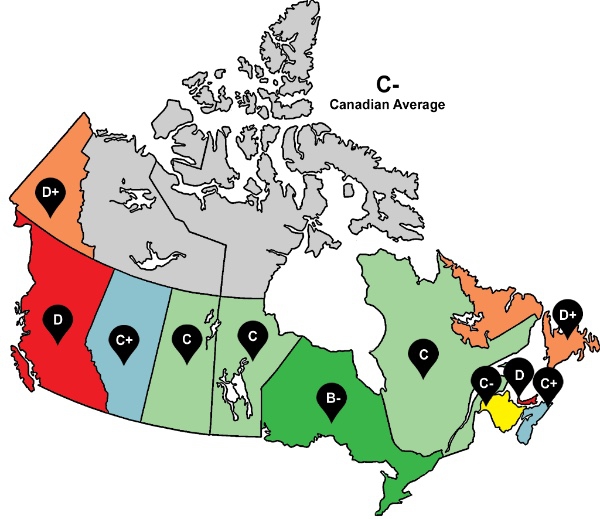 Average scores of the 10 provinces and Yukon, according to a new University of Waterloo report. Intact Centre on Climate Adaptation

Waterloo, Ont. – The provinces and Yukon are not as prepared as they could be for floods, says a new report out of the Intact Centre on Climate Adaptation at the University of Waterloo.

The report, “Climate Change and the Preparedness of Canadian Provinces and Yukon to Limit Potential Flood Damage,” surveyed 103 government representatives across 91 provincial and territorial ministries, departments and agencies between December 2015 and April 2016, the centre said in a news release. Assessments focused on the preparedness of provinces and Yukon to limit flood damage relative to current and future major rainfall events, across 12 categories of assessment, including flood-plain mapping, land-use planning, public health and safety, and emergency preparedness and response.

The report found the provinces and Yukon are doing relatively well in ensuring public health and safety by maintaining the capacity of hospitals and public health units to support the continuity of service delivery during floods. They also received high scores for emergency preparedness, as the provinces and Yukon work with local authorities and community leaders to identify and prepare for flood vulnerabilities.

Areas where the provinces and Yukon are not doing well include engagement with home and commercial property owners to identify and mitigate flood risks. Also, survey respondents often expressed frustration with municipalities that frequently override direction from the provinces to limit new development in flood-prone areas, thus putting homes and businesses at risk.

“The financial and social costs to Canadians will mount if preparedness to extreme weather events, and in particular flooding, continues to receive limited attention. Premiers are showing leadership on carbon pricing. Now, they need to build upon this commitment by embracing adaptation to address extreme weather and flooding with equal enthusiasm – this would be a strong position to lead with at COP 22 in Morocco,” said Blair Feltmate, head of the Intact Centre and a professor in the School of Environment, Enterprise and Development at University of Waterloo, in the release.

Based on feedback from those surveyed, the report recommends the provinces and Yukon:

·      create the position of chief adaptation officer (CAO), accountable to the premier, to identify areas of strength and weakness in reference to flood preparedness and actions to mitigate risk

·      issue audited public reports that document the state of flood preparedness on a multi-year cycle, such as every five years

Regarding the last recommendation, the report suggests that where development already exists in known flood-prone areas, the provinces and Yukon take action to limit potential flood damage and cautions that municipalities should not be able to override direction from the provinces or Yukon that restricts development in flood-prone areas or mandates flood-resilient design.