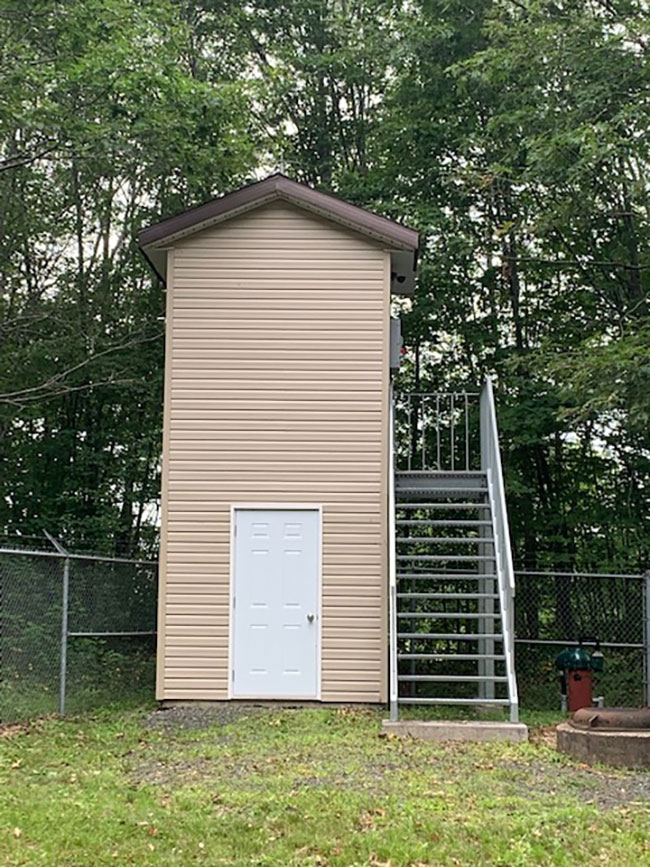 The goal was to raise well houses and their electrical components to a height where floodwaters would not affect them. PHOTO COURTESY VILLAGE OF NEW MINAS, NOVA SCOTIA

It has been two years since the Village of New Minas, N.S. completed the protection of its potable water wellheads and well houses against possible flooding.

Specifically, the project was a proactive precaution against groundwater contamination by overland flows from the nearby Cornwallis River.

Normally these floods flow into the sea, but the river’s seaward flow into the Atlantic Ocean can be blocked during high tides, allowing the floodwaters to pool on land as a result.

“The project was completed in March 2019,” said Gerard Hamilton, the Village of New Minas’ operations manager. Asked if the project had done what the Village was hoping for, he answered, “Yes, the New Minas Water Commission achieved its goal.”

This goal included protecting New Minas’ wellheads from external water penetration plus raising the well houses and their electrical components to a height where floodwaters would not affect them. Based on lidar (Light Detection and Ranging) readings cited by Nova Scotia Community College engineer Tim Webster in 2015, a concern had been raised that climate change-driven floodwaters from the Cornwallis River could penetrate seven of the Village’s 11 wellheads if nothing was done.

“With the changes in weather patterns in the northern hemisphere, it was determined to initiate a plan to preserve the integrity of the village’s water source in the event of a 100-year storm,” Hamilton said. “I discovered in an article in an AWWA (American Water Works Association) magazine that certain areas of the south of the United States were performing this type of protection to their wells where they felt there was vulnerability. [So] I met with our consulting engineer [Douglas Seamone] to discuss the possibility of initiating this project.”

To provide protection against flood water penetration, special well caps were added to seven of the wellheads. Each well cap was fitted with a snorkel air vent. “Under normal operating conditions, the snorkel air vent allows air to flow into the well,” Hamilton said. “When a flood occurs, the flood water pushes a precision float bell in a finely machined sealing surface, closing off passageway into the well.” The result: The potable water inside is protected until the flood waters recede.

“Some air vents operate up to 25 feet of head,” he added. “These well caps basically are designed to protect the well during submersion.” The bottom line: These alterations allowed the New Minas Water Commission to raise the effective height of the well caps to 9.5 metres, to effectively address the risks associated with possible overland flooding – even when exacerbated by climate change.

The other big change made by the New Minas Water Commission was to raise the height of the affected well houses by about three metres (nine to 10 feet). This ensured that their vulnerable electronic equipment is now above the waterline should flooding occur.

The importance of the wellhead raising project to securing New Minas’ potable water supply cannot be overstated. Located in the east end of Nova Scotia’s Annapolis Valley, New Minas sits south of the Cornwallis River – which is not usable as a source of potable water. Because the village lacks access to other lakes and ponds, New Minas has to rely on groundwater wells as a result. Some of these wells are up to 250-300 metres in depth. But others that have been drilled in sand and gravel are only 50-60 metres deep.

With a population of just over 4,000, New Minas didn’t have the resources to do this kind of project itself. As a result, “We needed to have a detailed plan which involved surveying and engineering as a part of our package in order to seek funding from various levels of government,” Hamilton said. “Once approved, the tendering process took place with the hiring of a project engineer and a contractor to oversee the project.”

Andrew McIntosh, a senior environmental engineer with Allnorth Consultants of New Brunswick, was eventually hired as the project manager. Meanwhile, the $500,000 needed to fund the project was provided by the federal government’s New Building Canada Fund – Small Communities Fund. It came with a catch: The project had to be completed by March 2019 in order to qualify for funding.

New Minas made this deadline (following the project’s initiation in early 2018), but it wasn’t easy. “Challenges included keeping the project on schedule as it became apparent that acquiring specialized equipment, especially for the well heads, took longer than anticipated,” Hamilton said. Another challenge was “ensuring that the contractor priority was this project.”

Still, the work got done, and now New Minas’ potable water supply is protected against the dangers of overland flooding. At a time when climate change seems to be making 100-year storms more common and more extreme, this preventive action could prove to be a tremendous boon to this Nova Scotian community, both today and in the uncertain future climate of years yet to come.