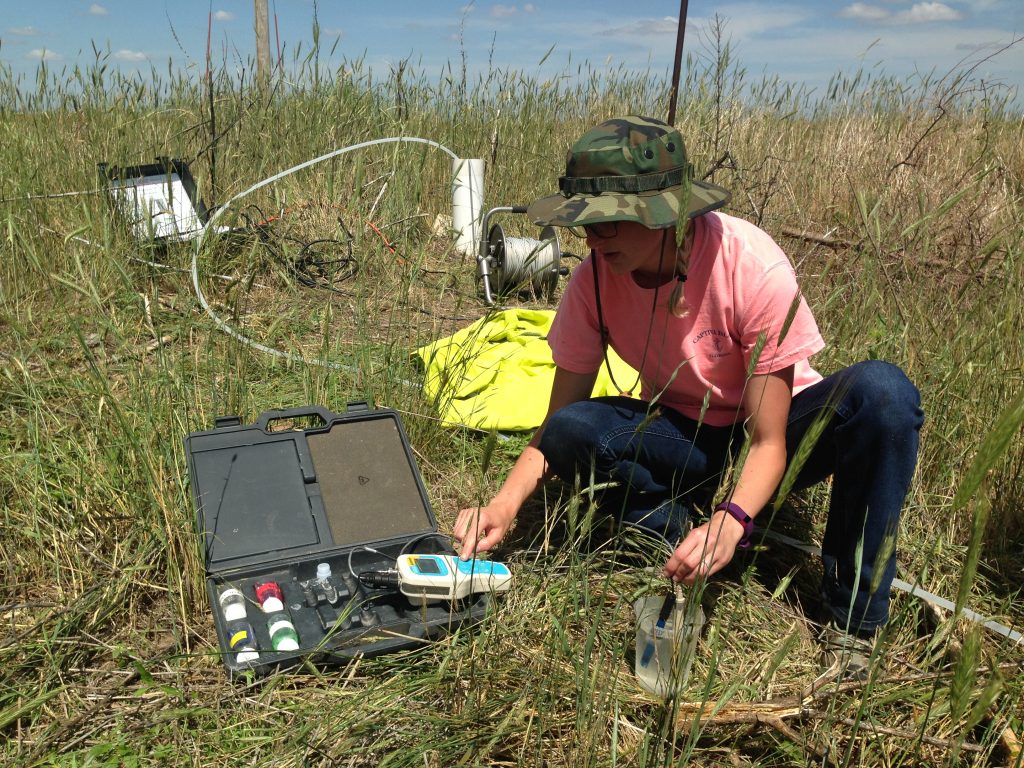 “The changes we measured in the Great Bend Prairie Aquifer appear to be large relative to changes observed in a national study by the U.S. Geological Survey,” said Matthew Kirk, Kansas State University associate professor of geology and the study’s principal investigator.

“The Great Bend Prairie Aquifer is very vulnerable to contamination and if rural well owners don’t know there is a problem, they obviously can’t do anything about it,” Kirk said. “Municipalities are required to test and provide safe drinking water for city residents but private rural well owners should take responsibility to test their wells at least every year.”

According to Lane, who now works for the Kansas Department of Health and Environment, there are many kits that can be purchased online for under $40 that test for bacteria, pesticides, lead, copper, iron, nitrate and water hardness in water wells.

“Those kits are good to use for basic readings and if anything is concerning, then residents can send a sample to a lab for further testing,” Lane said. “At KDHE, we try to inform private water well communities that it’s important to test their wells annually.”

Kirk and Lane’s 2016 study measured water chemistries and compared them with 1970s measurements at the same sites. Twenty of 21 wells had increases of nitrate concentrations, or NO3-, compared to the 1970s samples. Seven wells exceeded the nitrate concentrations allowed by the EPA standard for drinking water. In the 1970s study, only one of the wells was above the current EPA standard.

“There hasn’t been as much work on water quality as water quantity in the High Plains Aquifer,” Kirk said. “Groundwater storage in the Great Bend Prairie Aquifer is relatively stable, but if the water is there and the quality degrades, that’s also bad.”

According to Kirk, high nitrate levels in drinking water can cause human and livestock health issues by interfering with transport of oxygen by blood and possibly causing a higher risk of cancer. Too much nitrate in groundwater can also stimulate a release of uranium and selenium from the sediment into the water. While water quantity may be a top concern for many rural areas currently, Kirk said water quality issues may soon rise to the top of the list of rural water problems.

“Other parts of the High Plains Aquifer are most likely going to see changes too but it’s just taking it longer to show up because of transport time between the surface and the water table,” Kirk said.

That transport time is fairly quick in the study area since the soil is sandy and the water table is closer to the surface, Kirk said. In addition, the aquifer and sandy soil are not ideal living environments for the microbes that help clean the water by consuming nitrate.

“Groundwater in the Great Bend Prairie Aquifer often has oxygen and where that is the case, microorganisms typically respire the oxygen instead of nitrate,” Kirk said.

According to the study results, the wells with the highest contamination were those in fields used for crops, and the isotopic evidence – like a chemical signature – show that the nitrate in the aquifer is from fertilizer. Kirk said that fertilizers help farmers increase crop yields but excess fertilizer can contaminate water supplies.

“I don’t know what the future looks like or how we balance these issues – growing food for the world and maintaining health of natural resources to grow that food – but we need to find ways to slow down nitrate accumulation and better manage nitrate into the future,” Kirk said.

Kirk advocates for precision agriculture to apply fertilizer and planting cover crops – which use excess nitrate in the soil when planted in between the harvest of one food crop and the planting of the next. Kirk said these two practices help reduce runoff of excess fertilizer and are becoming more common with irrigated agriculture in the region. He also said that more studies are needed to evaluate if the drastic increase between the two time periods of the study is leveling off or if it has just ramped up in recent years.

“We need more data about the seasonal variation in nitrate levels and multiple years of data to really understand the trend of the increase,” Kirk said. “We also hope to sample additional wells to evaluate change over more of the aquifer. We wanted to document this finding and try to spread the word because, at the end in the day, it’s a big increase of nitrate and could affect people’s health.”

Support for the study was provided by a graduate student research grant from the Geological Society of America, the Kansas State University Department of Geology and the National Science Foundation.