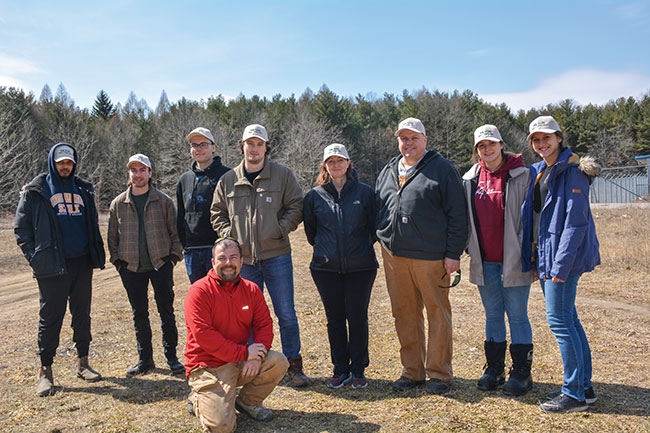 Outreach efforts by J.B. Wilson and Son Well Drilling, the University of Windsor and Fleming College are giving post-secondary science students who may someday work as consultants a taste of what’s involved in drilling a water well and encouraging high school students to seriously consider a career in drilling.

DRILLING FIELD TRIP FOR STUDENTS HELPS BRIDGE GAP
Students in the environmental science program at the University of Windsor were taken on a field trip to remember led by Johnny Wilson, of J.B. Wilson and Son Well Drilling in Springfield, Ont.

Johnny Wilson, who has a dual background in drilling and hydrogeology, started the day on a light note. “We thought we’d show you how wells are drilled before you try to tell us how to drill wells,” he told the students, who potentially will work as consultants for government or private industry.

The group toured the shop, which contains a 14-foot test well, learned about the challenges of water-well drilling and learned the ideal conditions for air and mud rotary versus cable-tool drilling. As veteran driller John Wilson looked on, the crew witnessed startup of Wilsons’ air-rotary rig. Matt Wilson explained, among other things, differences in drill bits.

They also learned about setting screens and discussed soil makeup in the area centred in Elgin County, which is largely glacial till and limestone. They also received samples of well records.

The students visited a well site to observe a well that had issues with high iron content and straightness likely related to improper grouting. Johnny Wilson explained that a cable tool can be good for centring a well and that gravel pack and proper grouting helps keep it straight. They also observed newer wells that were done properly.

The tour ended in Iona at Fleetwood Farms. Farmers Bob, Nancy and David McKillop talked with students and joined the crowd of onlookers as the well was worked on through mechanical means, including using the bailer to get a sample. Next step will be chemical means, students were told. (See more photos here.)

The lively – and unusually warm – March day ended with a different kind of demonstration: Johnny Wilson played his Celtic drum, a Bodhran, and sang a favourite Atlantic tune.

It was the first time most of those students had looked up close at a water well. Student Alex said he gained a new perspective on his chosen field of environmental science. “I’m really enjoying the day. It’s great seeing all the different aspects of drilling.”

FLEMING COLLEGE MAKING MOST OF COMMUNITY SERVICE
Fleming College’s drilling and blasting program has developed a promising initiative that gives post-graduate volunteer hours in exchange for promoting the drilling program to their classmates. Students in the program are required to complete five hours of community service. Starting in September, that service can take the form of shop maintenance and other jobs that need doing around the college’s shop and campus.

After completing those hours, they will go back to their old high schools and make a presentation to students there.

“The presentation is prepared for them and they can add in slides of their own,” says Jim Smith, Fleming College liaison and professor of Fleming’s post-graduate drilling and blasting program in Lindsay, Ont. One of the benefits is that often the high school students will know the Fleming student as they are recent high school graduates.

What makes this outreach even more effective is that 55 to 60 per cent of his 45 drilling students have taken entry-level drilling jobs over the summer. “They will have that experience under their belt,” Smith says. “It’s kind of like an audition.”

“It’s good for students,” he says. The only problem is keeping students in school. “If they like the work and the employers like them, they may get invited to stay on in the job.” He says they encourage students to finish their two-year program so they have the transferable skills needed to give them options in their careers.

Another 18 intake students that started in January will carry on with their courses and catch up with their classmates by the time they finish their summer jobs.