Want to launch a children’s ground water festival? Here’s how 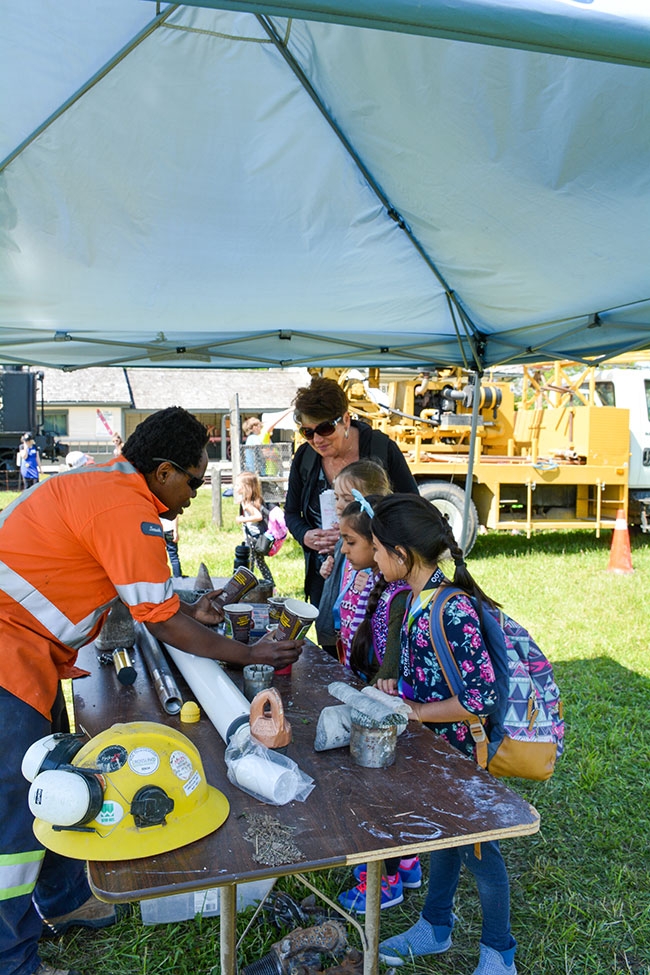 Sarah from Aardvark Drilling shows students material used to filter water around a well casing. The Guelph, Ont., drilling business is a regular in-kind sponsor of the Waterloo Wellington festival.

As water-well drillers you have become very good at answering questions from well owners, friends, neighbours and the general public.

What if we told you there was a way to spread the education net even wider? What if you could teach thousands of children and adults about ground water, help schools satisfy their science education requirements and share your water-well expertise with your neighbours face to face – all in a relaxed, outdoor setting?

Peter Gray and other ground water educators have discovered and honed one such magic formula for taking ground water knowledge to the people. And they are keen to share their model with those interested in spreading the word about ground water.

Gray lives a bit of a double life as vice-president and senior hydrogeologist for MTE Consultants in Kitchener, Ont., and volunteer ground water leader. He is a founding director and the volunteer president of the Children’s Water Education Council (CWEC), a registered, non-profit charitable organization that in 1994 staged the first Children’s Groundwater Festival in Milton.

Since then, he has led the Waterloo Wellington Children’s Groundwater Festival committee and spearheaded several creative education programs for kids from the elementary level up to university. These include Just Add Water portable education trailers, classroom presentations to high school students about potential water careers and a hydrologic field course for Grade 7 and 8 students.

The children’s festivals are the biggest success story, but many people in and outside of the ground water industry still aren’t aware of these grassroots events and of how easy they are to host now that a solid foundation has been laid by Gray and other dedicated volunteers and partners.

The attraction for young and old is hands-on fun. “We tried to introduce the practical aspect of the industry at the festivals and kids really loved it,” Gray says. “That whole idea of taking kids on a field trip to a place where they can learn in a fun and interactive way about water and the environment has sold itself across the province. So we created a not-for-profit to help the existing water festival committees develop and start new water festivals. It’s been pretty amazing.”

The festivals promote community-based environmental education by teaming up local organizations to create unique water-based programs designed for children that are hands-on and interactive, Gray told attendees of the Canadian Ground Water Conference during a talk in 2016. These may include local and provincial governments, conservation authorities, stewardship councils, school boards, health units, local businesses and members from various provincial organizations.

“The overall goal is to educate students about the importance of water in their lives, and how they can take an active role in protection and in conserving water daily,” says Susan Reid, CWEC’s, who has worked for the Waterloo Wellington festival since 2000.

“There are 28 communities hosting a children’s water festival,” Reid says. “More than 60,000 children are educated about water-based issues and concepts every year through ground water events.”

The programs are in high demand, waiting lists are always full and the association has a limited capacity, Gray says. Why? “Once anyone comes to a water festival they can’t leave without thinking, ‘My kid’s got to go to one of these!’ ”

Another reason these events are effective, he thinks, is that they work at the grassroots level. “A trip from a concerned grandchild is worth five or 10 trips from a regulatory agent,” he says, quoting Susan Seacrest, who organizes the Nebraska ground water festival that inspired Ontario’s.

“The neat thing is we were able to develop it so that many of the students come as grade school, then they come back as high school students as instructors,” Gray says. “So the whole concept gets reinforced at the high school level. The high schools love that concept. Some students have gone to university and come back to teach. It’s been very cool.”

In some communities that do not rely directly on ground water as a drinking source, the emphasis has shifted from ground water specifically to water protection in general, especially since Walkerton in 2000, Gray says.

The concepts of children, water, education and the environment are becoming more and more visible in the press and more and more relatable to everyday life, Gray says. “Education and knowledge is power and the goal is to try and educate kids so they help contribute to making wise decisions.”

“It is important to teach our youth about this important resource. Participants take home a newfound respect for the environment and one of the goals of any festival is to encourage stewardship of this resource,” Reid adds.

At a number of water festivals, well drillers attend the event and provide an activity centre for students to view,” she says. “At the Waterloo Wellington festival, for example, Aardvark Drilling has set up a drilling rig and shown students core samples, and their equipment, so that students understand how a well works, and how we get water out of an aquifer.”

Gray believes the best way to learn and to really understand it is by being directly involved. The concept, known as experiential learning, differs from traditional classroom teaching methods where teacher stand at the front of the class and teach. “Not all kids learn that way. In fact, I learn best with something in my hands, just by doing something,” he says, noting that the school system looks for opportunities like these and it’s been a great partnership.

It’s easy to see that a festival is good for communities. The benefits to the industry may not be as obvious, but they are just as real. “It allows an exposure for students to the industry in a safe, informative setting,” Reid points out.

Gray says drillers who have participated get positive feedback from kids who have attended and now have a greater appreciation for the family business. But it isn’t just kids who attend. “For every five kids who attend, one adult accompanies them, and although the intention isn’t to brand their company while they are there, it does create awareness of who are the champions in the community.”

However, he stresses, there must be an element of genuine interest in education and community involved. That said, in Ontario, the CWEC promotes its partner organizations, in-kind and financial supporters in various ways. For example, all print material has a listing of these contributors, so teachers and other organizations receive this information in event guides and newsletters.

Sarah from Aardvark Drilling shows students material used to filter water around a well casing. The Guelph, Ont., drilling business is a regular in-kind sponsor of the Waterloo Wellington festival.

CROSS-CANADA DREAM
Currently the festivals are focused in Ontario, Reid says, although they have provided resources to communities in other provinces, among them Alberta, Manitoba, New Brunswick and Quebec. They would love to see the festivals catch on across Canada.

“It needs a local champion, Gray says. “If you look at the individual makeup of each of those organizing committees in each of those communities, the champion comes from different places. Sometimes it’s a local government; sometimes it’s a health unit. It really varies depending upon the makeup of the community and that’s why they’ve survived and why they’ve continued to flourish, because the local community adopts it and then makes it their own. It’s really that kind of homegrown, grassroots approach that I think people can own.”

Gray encourages water well drillers to start or participate in a local children’s ground water festival. “One of the main reasons we want to have our contractor friends there is that they are the best guardians of the community. They know how to access and properly drill wells and make a supply safe for the public. That’s a message that continues to need to be told. And who better to tell it than the guys who are installing it and who are licensed to do that?”

He suggests anyone who wants to start a festival make it their own by linking it to the flavour of their own community. The individual festivals have websites and all of the festivals share ideas, equipment and resources. “It’s an inclusive bunch, so all you have to do is ask for help,” he says.

Would-be champions can get in touch with Gray and Reid at the CWEC to start a festival in their community. Also, the CWEC website has a list of contacts and anyone can buy a “Starting a Water Festival” kit.

Gray is especially proud of a complementary program he spearheaded called Just Add Water, which is carried out in partnership with the Ontario Water Works Association and the Ontario Trillium Foundation. He and other volunteers outfitted a dozen enclosed trailers with 10 activity centres. “All you have to do is hook up a trailer to a truck, drive it to a site, take out the activity centre and add water,” he says. Each centre comes with a fairly straightforward manual that is easy for instructors to understand. The program offers easy access to educational tools and has caught on in many rural communities in Ontario, including indigenous communities.

Although the trailers are currently available only in Ontario, anyone in another province could approach a funding organization similar to the Trillium Foundation and ask for funding to set one up in their province, he says. “I think we’ve made it pretty easy now for someone else to do it, and the response is going to be, ‘Here you go. Here’s how to start.’

“It’s a great opportunity,” he adds. “All you have to do is find the closest water festival and get involved. And only good things are going to come from that.”