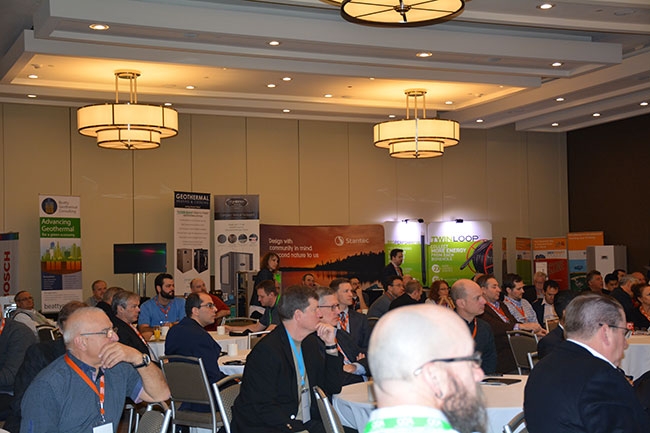 Ontario’s new homeowner rebate program was front and centre and the mood was positive at the Ontario Geothermal Association’s 2018 conference and trade show, which featured speakers on many aspects of the geo-exchange industry.

Attendees learned details of how the GreenON rebate program will work for contractors and homeowners, perspectives on the geothermal industry in Ontario, across Canada, in the United States, and in Europe in the form of a talk on the DecarbHeat climate change initiative. They also took in a slate of focused talks that encompassed industry research, public relations, a geo-loop installation case study and a perspective on the ground source heat pump market.

In Ontario: GreenON incentives include geothermal
Parminder Sandhu, Green Ontario Fund chairman, said the Green Ontario rebate program is designed to help homeowners get access to and finance sustainable technology to help reduce greenhouse gas pollution. His is an arm’s-length board that reports to the Ministry of Energy and Climate Change. It is funded by cap-and-trade proceeds and has a budget of $2-3 billion.

Sandhu said his team anticipates more families taking advantage of the program. He hinted at an upcoming announcement that has since been made: Ontario will invest up to $300 million in the GreenON Challenge beginning this year. Ontario-based private businesses, non-profit organizations, registered charities, conservation authorities and utilities, as well as Indigenous not-for-profit organizations, are invited to submit expressions of ideas by May 7, 2018. Selected applicants will be invited to submit a more detailed business case.

Sandhu said he expects these industries will be a source of good jobs. He pledged his group’s support and said they would work with the OGA to cut out as much paperwork as possible.

Ontario rebate program particulars
Evelyn Lundhild, senior manager for GreenON, which is part of the Independent Electricity System Operator, said the rebate program has up to $20,000 available to homeowners replacing existing systems. There is a program for new construction as well. One rebate per home is allowed and the work must be done by a registered contractor, Lundhild said.

Horizontal loops are eligible for $2,000 per loop ton and vertical for $3,000, she reminded the conference. At present there is no prescription for open loops.

Homeowner requirements: Coleman went through the steps homeowners must take to receive their rebate: Homeowners choose from an online list of approved contractors. Each heat pump is assigned a number and that will verify the quality of the equipment. Homeowners must submit proof of equipment purchase, before-and-after photos, they can expect a rebate cheque in the mail after six to eight weeks.

Contractor requirements: To be an approved contractor for the program, contractors must meet several requirements. They must have an HST registration number, either a Master Business Licence or articles of incorporation valid for at least two years, $2 million in liability insurance, $1 million in automotive insurance, a letter of clearance from WSIB (not required for sole proprietor), complete program orientation, and they must sign the Contractor Participation Agreement.

For contractors there is a 180-day grace period to recognize those who have existing certification beginning when the program went into effect in December. Luymes said the plan is to supplement current contractors with a coach on the first three jobs to ensure quality control. Coleman encouraged contractors who apply for approval to use a checklist to ensure they have submitted all of the required information and avoid delays in getting approved. There may be a time lag before your name appears on the website, she said.

One attendee wondered why gas and geothermal programs are separate and why you go through what seems a more rigorous program for gas but don’t have access to better funding. Lundhild said the rigour on the geothermal side is in the careful vetting of contractors.

A contractor in the audience commented it is hard to convince homeowners to remove and replace existing equipment. One out of four still go through with the installation once they find out how expensive it is.

Ontario homeowners who live in a detached home, townhouse or semi are able to take part. The rebate is also available to homeowners of new custom home builds. GreenON is still determining what defines a “new custom home,” Lundhild said in answer to an audience question. This will be addressed to homeowners, as they cannot allow developers to access the money, she noted.

Canada-wide: Pan-Canadian Framework
Debbie Scharf, director of the Office of Energy Efficiency at Natural Resources Canada, provided a broad overview of the Pan-Canadian Framework on Clean Growth and Climate Change her office is working on. Among other responsibilities, Scharf oversees the Energy Star program.

With 17 per cent of greenhouse gas emissions in Canada coming from residential, commercial and institutional buildings, she said, this is an area that benefits from collaboration among federal, provincial, territorial, Indigenous peoples, utilities, associations and other stakeholders.

The framework, a different model from the previous rebate programs, is intended to drive standards, not react to those standards that are lagging. It is meant as a template that can be adapted to the needs of provinces and territories and potentially adopted and harmonized across Canada, she said. It has four priorities: a net-zero energy code for new buildings, existing buildings, labelling and disclosure of energy use in buildings and high-efficiency equipment and appliances.

The PCF has been running for about a year, with the federal government contributing $2 billion mostly through improvements and retrofits, Scharf said. She and her team are developing a series of tiered codes expected to be in place by 2022. Provinces and territories can then choose what works for them. The codes set minimum energy performance standards. Some provinces may have the program in place by 2019.

The focus is on heating through the building envelope and efficiency of equipment. Priorities are space heating, water heating and residential windows. By 2035 they want all space-heating technology to meet an energy performance rate of 100 per cent.

She referred to the market transformation scorecard, a “starting point” released in August 2017 and informally known as the five A’s: availability, accessibility, assessment, affordability and acceptance. She noted that four technologies have come to the fore: commercial furnaces, ground source heat pumps, cold-climate air source heat pumps and gas heat pumps. The challenge is how to sustain these systems and not have them fluctuate with rebates that come and go, she said.

They have held workshops and expect to publish a roadmap and an update on implementation of the building strategy in the summer.

U.S. perspective: IGSHPA touts progress of geo-exchange
Garen Ewbank, president of the International Ground Source Heat Pumps Association, headquartered at Oklahoma State University, addressed the audience with a message about public perception of the geothermal industry. The association, which was established in 1987, has been heavily involved in training. Ewbank said the IGSHPA is changing the way the courses will run and when finished it will be ANSI accredited. They will release an international version.

He encouraged people in the industry to “document, document, document” energy loads, as geo-exchange is a relatively new and evolving industry. Drawings with homeowners are important, he said.

“We’re not telling the right story,” Ewbank said. A ground source heat pump costs less, lasts 50-plus years compared to 30 years for a gas furnace. It makes sense for other utilities to work with geothermal, he said.

He pointed to Drake Landing Solar Community in Okotoks, Alta., as a great example of what sustainable work can be done. The district heating project is in its 10th successful year, with 52 energy-efficient residences heated by a system designed to store abundant solar energy underground during the summer months and distribute the energy to each home for space-heating needs during winter months.

Some of the terms used confuse the public, he said, noting, “We need new rating systems terms.” Ewbank said he is going to introduce new terminology and talk in terms of KW rating to express an integrated current. The goal is to deliver grid stability, which he defined as a combination of reliability and fair pricing.

Geothermal contractor has positive outlook
Matt Bulley, a geo-exchange installer with Bi-Temp Limited in Belleville, Ont., came to get the latest information on the industry and government incentives for customers. Bulley, who has been in the geo-exchange industry for about 10 years and was attending the OGA conference for the second time, said he sees a lot of promise and excitement as well as a lot of the same faces. “It’s encouraging to see people in it for the long term,” he said.

He is involved in a lot of work on the residential and multi-use apartment side, and is hopeful young people will see the value of geothermal technology. “After all, we have it drummed into us to reduce, reuse and recycle,” he said.

Among many interesting speakers were: