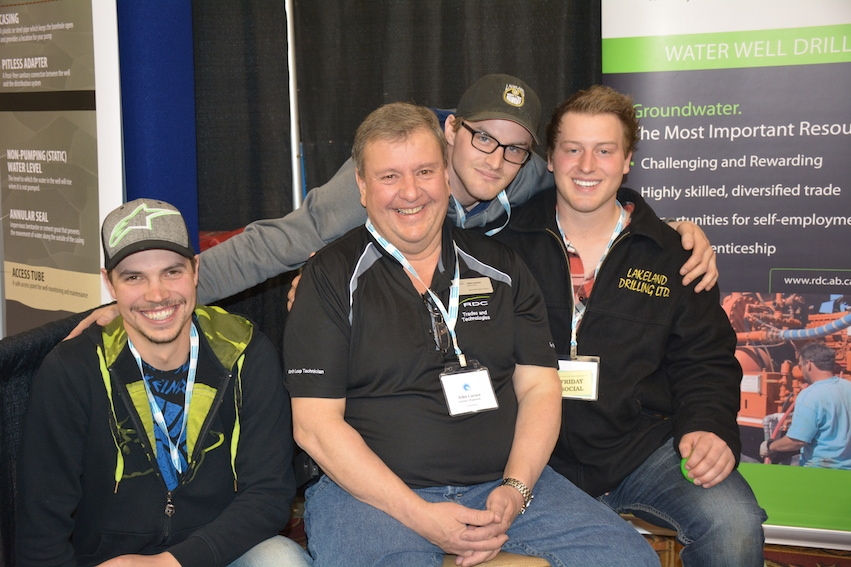 “I know it sounds cliché, but I take in something new every day,” says well driller Jordan Lepper, far right. Lepper is pictured here with David Kassian, John Larson and brother Justin Lepper at the 2015 AWWDA convention in Red Deer.

Ground Water Canada put out a call to readers to tell us about outstanding young professionals who exhibit outstanding leadership, skill and dedication to the industry. Readers came through with an impressive sampling of the industry’s best – including Jordan Lepper. Read on to learn more about this young well driller!

At 26, and eight years in, water well driller Jordan Lepper feels good about his choice of career. That has a lot to do with family.

Lepper works for Lakeland Drilling in St. Paul, Alta., two hours northeast of Edmonton. Established in 1967, it was purchased by his father, Darell, in 1997. Brother Justin, 29, works in the business as a driller as well.

He remembers thinking at age six being keen to drive drill rigs – not tractors, like other kids he knew. At 16, he was sure drilling was for him. That’s about when he started to help his father by sweeping out the shop and helping on the rigs.

Lepper always liked school – and was not short on “book smarts,” having received a Top Apprentice Award from the Alberta Apprenticeship and Industry Training Board in 2014 and the Maurice Lewis Award for top marks at Red Deer College during his second year. But he never seriously considered a career outside of drilling: something drew him toward the industry.

As a driller now, he likes the physical labour of the job, the time spent outdoors and, not to be overlooked, the money. “This industry has allowed us to make a good, honest living,” he says. He also likes the idea of being his own boss one day.

The company’s services include drilling, servicing, repair, and rehabilitation of domestic water wells, as well as agricultural and industrial source wells, geophysical logging, coring and observation wells, and pump work.

But Lakeland’s bread and butter is environmental drilling, Lepper says.Most of their work is in Cold Lake and Conklin, but they also have taken on jobs in Calgary and Drayton Valley. “We go where the work is,” he says.

He remembers helping on a job for Canadian Natural Resources Limited Horizon in Fort MacMurray when he was just 18. “I got to drill a well at the bottom of a mine.”

“I know it sounds cliché, but I take in something new every day,” Lepper says. “I take as much info from everyone as I can. I listen to everyone.”

Working in the family business has brought the family a lot closer together, he reflects. “I didn’t see a lot of my dad as a child,” he says. “If you look at it in that way, you stay positive, even on a bad day.”

Lepper and his wife, Kennedy, have a three-year-old daughter, Arie, and another child due in the fall. He enjoys spending time with them and says Arie is “into everything.” He says with a laugh, “She’s payback for how I was with my mum.” He also likes to play hockey and hang out with friends.

“It’s been a winding road of learning,” he says. Thinking back on his early days as a driller, he recalls being led astray by “thinking I knew something I didn’t.”