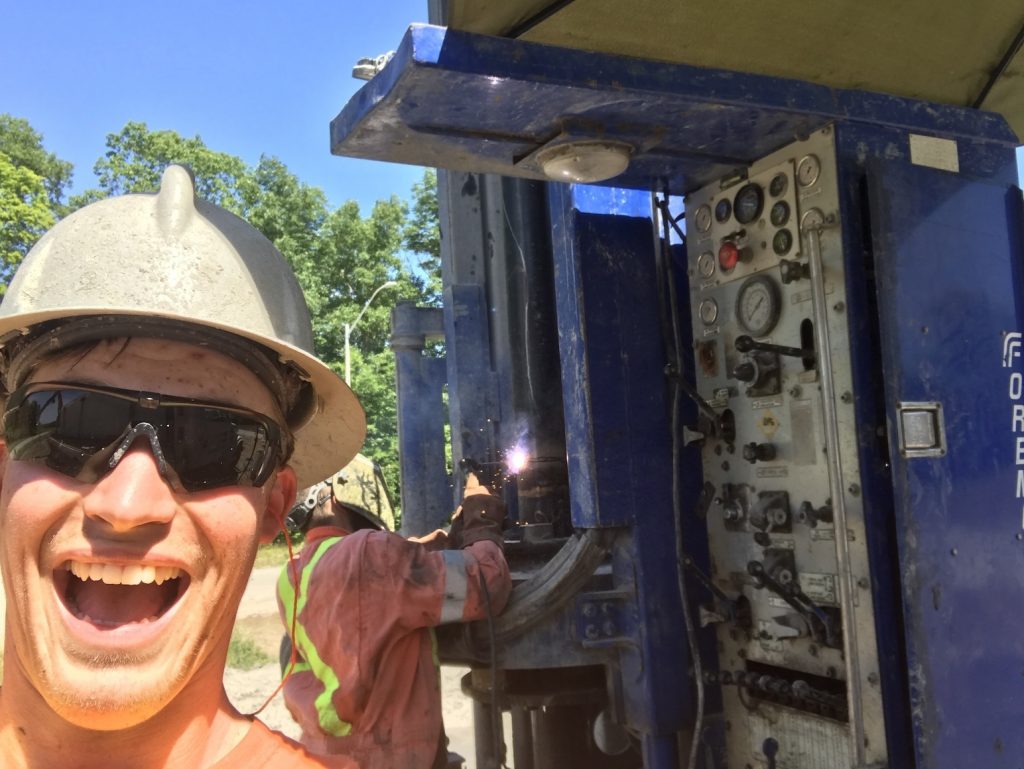 Ground Water Canada put out a call to readers to tell us about outstanding young professionals who exhibit outstanding leadership, skill and dedication to the industry. Readers came through with an impressive sampling of the industry’s best – including Parker Drury. Read on to learn more about this young well driller!

At 27, Parker Drury, has been a driller and installer with his family’s business, Drury Well Drilling in Barrie, Ont., for five years.

Father Bob Drury runs the business, which has been incorporated since 1988, making this their 30th year in business. The younger Drury is starting the process of taking over the business and the plan is for him to assume ownership in five or six years.

Drury, who worked a lot of summers during his high school years, studied business administration at Georgian College. After deciding office work was not for him, he worked in the automotive industry for five years, then decided to get into well drilling full time. He first focused on servicing and now drills as well.

“I get a lot of satisfaction out of helping people get good, clean water,” he says, “and I learn a lot about other trades.”

His most memorable moments are those “firsts” – first service call, first day drilling. “The big learning curve days,” he calls them, noting that given the amount of time, materials and money at stake, it’s important to learn from any mistakes made.

“Parker is a great example of doing things properly and educating his customers and the public,” said Craig Morgan, Rideau Pipe, who nominated the young driller.

When I ask him about customers, this unearths some passionate ideas. “A lot of people don’t really understand where water comes from or why they have wells or treatment equipment and systems,” he says. “I love to educate people about pressure systems and how to maintain equipment. It helps them in the long term, even though it cuts somewhat into our stream of income.”

They like to use the best equipment. A lot of equipment now has 10-year life; his has a 15- to 20-year life. “A lot of people have trouble cutting that cheque.” But if you amortize the cost over years, it probably works out cheaper. Education helps them understand it’s a good investment. It’s the heart of the home.”

Drury has some advice for those looking to get into well drilling. “It’s good to keep an open mind to learning things,” he says. “Be prepared to work hard, put in long hours and do heavy lifting, he says. But you’ll find it fulfilling. I do.”

“Work hard, but work smart, safely, and sustainably – both personally and environmentally,” he says. “Critical thinking is an absolute necessity for this industry whether it’s in pumps and pressure system installation or service or on the drilling side of things.”

If there’s a challenge, it’s in separating work and home life and getting a work-life balance, Drury says. “We do a lot of jobs and I work a lot of late nights,” he says. “Sometimes just stepping away from the work for a bit is a challenge.”

In his spare time Drury tries to get in some woodworking, read, listen to music, and visit friends in the city or at nearby cottages.

But it’s clear he loves the work itself. “Once you’re enjoying what you’re doing, it’s not work anymore.”