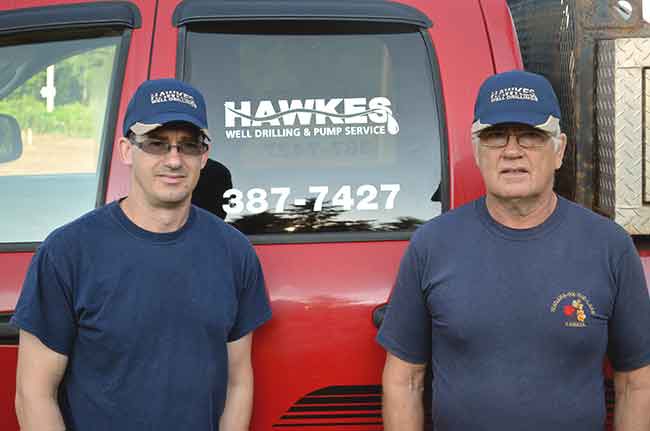 Darrell Carson (left) began working alongside his father, Cyrus Carson, on the job site, learning the ropes before buying the business from him in 2011. Photo courtesy Hawkes Well Drilling & Pump Service

Working in the family’s well drilling business was something Darrell Carson always talked about, but his career path made a few twists and turns before that became a reality.

The late Anthony Hawkes, Carson’s grandfather, founded Hawkes Well Drilling & Pump Service in 1947. The company, located in Lower Coverdale, N.B. – about 10 minutes from Moncton – was a true family affair with several family members working in or owning the business over the years.

Carson, however, studied electronics in college and began working for a gaming company in Montreal soon after. It was a job he enjoyed, but New Brunswick always seemed to be beckoning him home. Eventually, Carson decided to swap an office chair for a drill rig.

He began working alongside his father, Cyrus Carson, on the job site, learning the ropes before buying the business from him in 2011. Now as a third-generation owner of Hawkes Well Drilling, Carson is carrying on the family business, keeping it true to its roots while incorporating advancements in technology.

Working in the fresh east coast air has been a welcomed change from the office environment of his previous job. “I enjoy getting out and working with my hands. You get to see so many aspects, from the business side of things to the labour part of it. I enjoy going out and meeting people. Whether drilling wells or doing service work, you get to go out and talk to the customers,” he says.

Carson prides himself on the company’s longstanding reputation for honesty and hard work and always knew it was a tradition to take very seriously. “Doing the job and doing it properly: that’s where I know a lot of businesses with succession tend to fail because sometimes the younger generation isn’t willing to put in the effort. You have to keep things operating the way they always have been while moving forward. Keeping up with new technology, but keeping the work ethic that the company’s been known for,” he explains.

Hawkes Well Drilling primarily services the Moncton area, travelling a 90-minute radius from the city centre. The business is a small operation run entirely by the family deploying one 22W drill rig and two service trucks. Amanda Carson, Darrell’s wife and co-owner of the company, keeps the office running smoothly, dealing with paperwork and back-end operations. Darrell and Cyrus can be found on the job site, drilling and repairing wells, servicing and installing pumps, and providing water treatment.

Much of their 22W cable-tool rig has been converted to hydraulics, including the elevator, levelling jacks, hydraulic breakout and derrick hoist. “We’ve stayed with the cable-tool operation. It seems the [drilling] market is shrinking; there’s not as much work there as there used to be. There is a lot more service and repairs for wells, so we didn’t want to get into bigger equipment that requires more work.”

Darrell Carson (left) began working alongside his father, Cyrus Carson, on the job site, learning the ropes before buying the business from him in 2011. Photo courtesy Hawkes Well Drilling & Pump Service

With the service side of the business expanding, the company has added water quality testing equipment, pump pullers, digital flow metres and Well-Vu cameras to its equipment list in order to better diagnose customers’ water issues.

It’s this kind of customer-oriented attitude that has allowed the company to successfully span nearly seven decades. Darrell says responding to customers’ calls quickly and with a high degree of workmanship has fostered a sense of reliability and trust between him and his clients. “Word-of-mouth is really important. We don’t do a lot of advertising, just some signage, but a lot of our work is word-of-mouth and references. Relationship with the customer is crucial. With rotary you’re in and out, but with cable-tool technology, you get to know the customer. They come out and watch, they learn about the operation, and that helps to build a relationship with them. I enjoy that.”

As a member of the New Brunswick Ground Water Association, Carson says stays current with proposed changes to the industry and play an active role in how the industry moves forward. “Some changes that come out are for the better, but some in our opinion aren’t really helpful, so we try to help influence those. Whatever regulations do come out, we make appropriate changes to comply with rules and regulations.”

Attending trade shows and pump seminars, particularly in the Maritimes, is another way Carson stays up to date with the industry’s latest technological advancements. “I keep up to speed with the new products coming out, particularly on the pump and treatment side of things. We’ve seen an increase of things like variable -speed-drive technology. We install quite a bit of that product now. People are moving out from the city and want to keep city pressure.”

Approaching his five-year anniversary as owner of the business, Carson is happy with its size and growth. The rural nature of his service area combined with an increase in immigration of skilled professionals to the region has translated into steady work. “We’re able to live a good life doing service work, repairs and drilling about 50 wells a year. I make a living for my family and my father still comes in as well during the summer months to help.”

The new challenge for Carson is learning to balance long workdays with a young family. With two children under the age of three and a successful business, there is little time for rest. Perhaps Carson’s grandfather was in a similar position 68 years ago and no doubt would be pleased to know his great-grandchildren are nurtured by the company he founded.

Julie Fitz-Gerald is a freelance writer based in Uxbridge, Ont., and a regular contributor to Ground Water Canada.