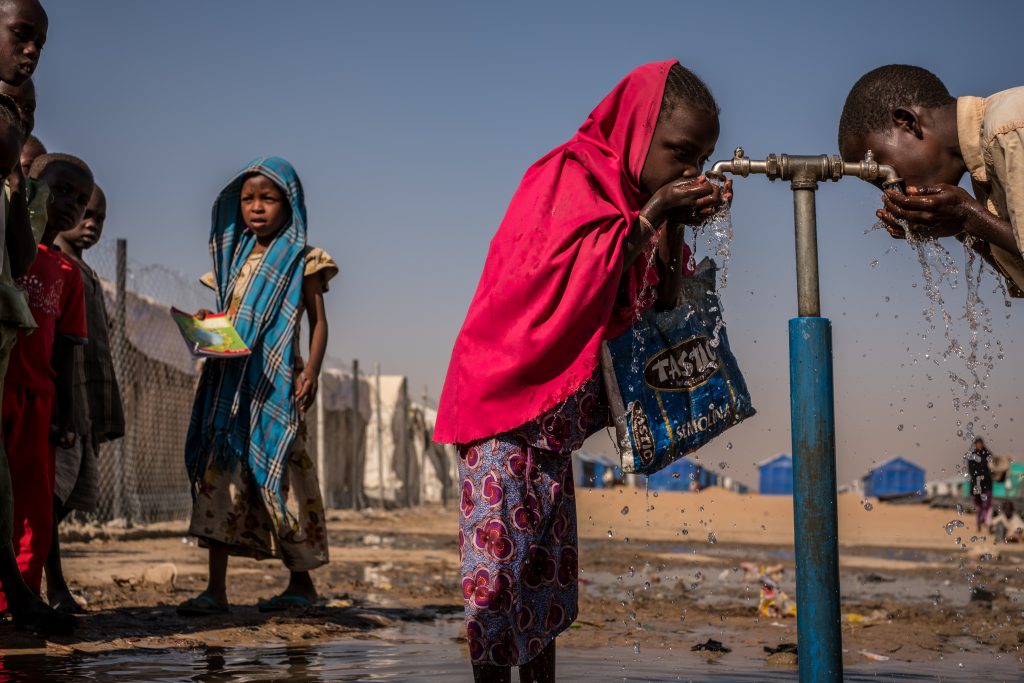 Children drink from a tap during recess inside a UNICEF supported primary school inside Bukasi Internally Displaced People's camp, in Maiduguri, Borno State, Nigeria on February 28, 2017. Fighting between Boko Haram, a jihadist group, and the Nigerian military has displaced 2.3 million people from their homes since May 2013. The group regularly kidnap and rape girls, including the well publicized capture of 276 school girls from Chibok in April, 2014. The country's president, Muhammadu Buhari, a former general, has claimed multiple times the war is over as fighting continues. In late 2016, the United Nations FEWS network declared a credible risk of famine in the region. (Photo by Ashley Gilbertson / VII Photo for UNICEF)

Toronto and New York – Nearly 600 million children – or one in four children worldwide – will be living in areas with extremely limited water resources by 2040, according to a UNICEF report released on World Water Day.

The report, Thirsting for a Future: Water and children in a changing climate, looks at the threats to children’s lives and well-being caused by depleted sources of safe water and the ways climate change will intensify these risks in coming years.

“Clean, safe water is essential for children to grow and develop into healthy and productive global citizens,” said UNICEF Canada president and CEO David Morley in a news release. “Yet today, we’re failing a quarter of the world’s children by not ensuring the most basic component of their well-being. Clean water affects everything from a child’s health to their education and to their safety. Providing access to clean, safe water must quickly become a global priority before it’s too late.”

36 countries at extreme risk
According to the report, 36 countries are currently facing extremely high levels of water stress, which occurs when demand for water far exceeds the renewable supply available. Warmer temperatures, rising sea levels, increased floods, droughts and melting ice affect the quality and availability of water as well as sanitation systems.

Population growth, increased water consumption and higher demand for water largely due to industrialization and urbanization are draining water resources worldwide. Conflicts in many parts of the world also threaten children’s access to safe water.

All of these factors force children to use unsafe water, which exposes them to potentially deadly diseases like cholera and diarrhoea. Many children in drought-affected areas miss out on a chance to go to school because of the time it takes to collect water. Girls are especially vulnerable to attack during these times.

“Water is elemental; without it, nothing can grow. But around the world, millions of children lack access to safe water – endangering their lives, undermining their health, and jeopardizing their futures. This crisis will only grow unless we take collective action now,” said UNICEF executive director Anthony Lake.

The poorest and most vulnerable children will be most impacted by an increase in water stress, the report says, as millions of them already live in areas with low access to safe water and sanitation.

UNICEF calls for four urgent actions
“We commend Canada’s commitment of $2.65 billion to address the adverse effects of climate change in developing countries,” said Morley. “The government must now ensure that their investments reach the most vulnerable communities in the least developed countries, particularly children.”

The most urgent task ahead is for world governments and others to act now to halt the advance of climate change by curbing emissions and prioritizing renewable and sustainable energy sources. At the same time, we must also deal with the impacts of climate change on water sources, UNICEF said. The report concludes with a series of recommendations that can help curb the impact of climate change on the lives of children. Such measures include:

“In a changing climate, we must change the way we work to reach those who are most vulnerable. One of the most effective ways we can do that is safeguarding their access to safe water,” Lake said.