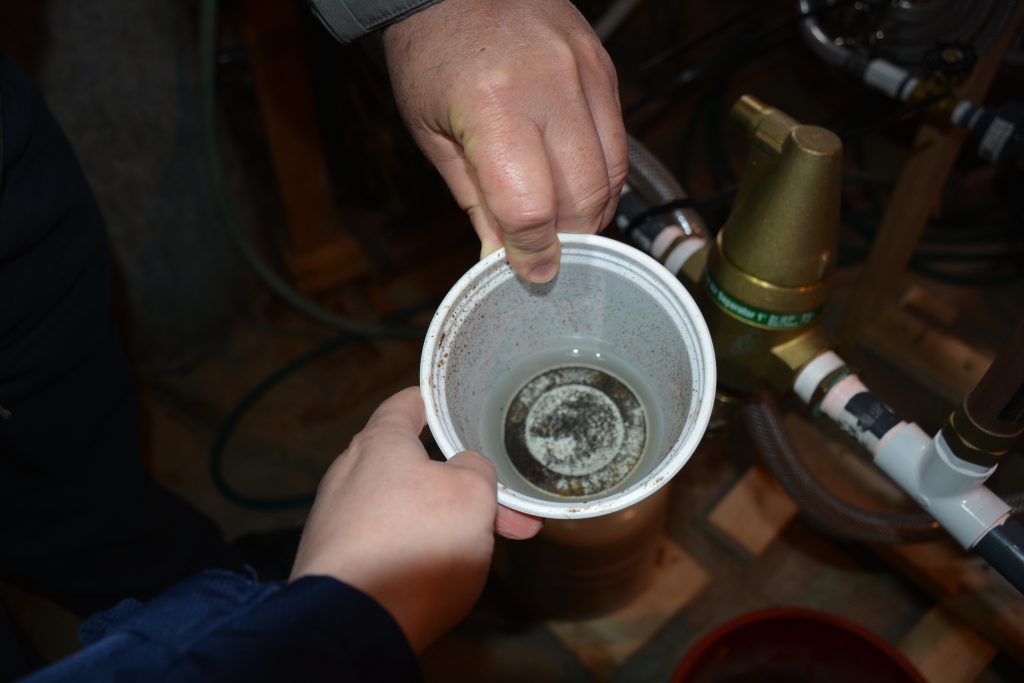 Excessive sediment, problematic gases and potentially infection-causing biofilm are among problems plaguing water-well owners in the Chatham-Kent area of Ontario. Here a cup of water at the farm of Dave Lusk shows sediment that has made his well water non-potable and regularly clogs his filtration system.

Toronto – Families depending on water wells in the Chatham-Kent area for their water supply travelled to Queens Park to pressure the provincial government to investigate the sediments polluting the area’s water wells.

NDP Member of Provincial Parliament Taras Natyshack held a news conference on June 5 at Queen’s Park with representatives of the families that struggle to use contaminated water wells.

“Both GLIER and OGWA support the urgent need for a Health Hazard Investigation into the polluting sediments,” said Jakubec, who said in a statement in front of the press conference:

“Many families in Chatham-Kent are completely dependent on ground water. The sediments so far analyzed by the community are raising more concerns than ever before.

“The sediments that have been continuously discharging into a number of water wells since wind farms were constructed in North Chatham-Kent have been found to contain Kettle Point Black Shale.

“Kettle Point Black Shale is a material considered as an Environmental Hazard in Canada because it has been shown the material contains heavy metals such as arsenic, mercury, lead and uranium.

“Premier Doug Ford gave Chatham-Kent strongly worded written commitments that his government would conduct a Health Hazard Investigation into the polluting sediments and hold the polluters accountable who caused the disturbance.

“Patience with Premier Ford delivering and making good on his promise of an investigation is now completely exasperated. Chatham-Kent families are realizing the Ford government is holding help away from coming into the community.

“To date, no experts or resources have been brought into Chatham-Kent to deal with the water problem by the Ford government.”

Jakubec said Ontarians are getting cancer each year from exposure to environmental carcinogens. He referred to a 2016 joint report from Cancer Care Ontario and Public Health Ontario. Arsenic causes a cancer burden on Ontario’s beleaguered health-care system each year.

“Cancer survivors that continue to use the area’s water wells are outraged and want answers now as to the safety of the well water,” he said. Given Public Health Ontario has acknowledged arsenic as a proven carcinogen and given arsenic is associated with the Kettle Point Black Shale found polluting the water wells, families are demanding the promised Health Hazard Investigation be done immediately to determine if Chatham-Kent’s water wells can cause or contribute to cancer.”

SUPPORT FROM THE ONTARIO GROUND WATER ASSOCIATION
The OGWA delivered the following statement at the press conference:

“The Ontario Ground Water Association is a not-for profit organization that is committed to the protection of the ground water aquifers that provide water to over three million Ontario residents.

“As the Chatham-Kent wind project moved forward, the executive director of the Ontario Ground Water Association cautioned the government about the potential to cause grave harm to the local aquifer.

“The government responded that there wouldn’t be damage, but as we have observed, damage has been done. Despite numerous wind projects being shut down, there is currently another wind project underway in the Finch area south of Ottawa. Similar geological conditions exist in the aquifers there, and similar damage will likely result.

“Our association is not against development, but as stated previously, we are seriously committed to the protection of ground water in Ontario.

“Our aquifers need to be protected from any form of contamination. Not only from wind turbine vibrations, such as in Chatham-Kent, but also from the improper storage of radioactive waste, the disposal of garbage in old quarries and gravel pits, industrial chemicals, PFSA’s from fire fighting, and low dose pharmaceuticals and micro-plastics.

“This would also include the protection of natural ground water recharge areas from over-development.

“The province of Ontario has one of the most plentiful ground water resources in the world, and it is the responsibility of us all to protect that ground water for future generations.”