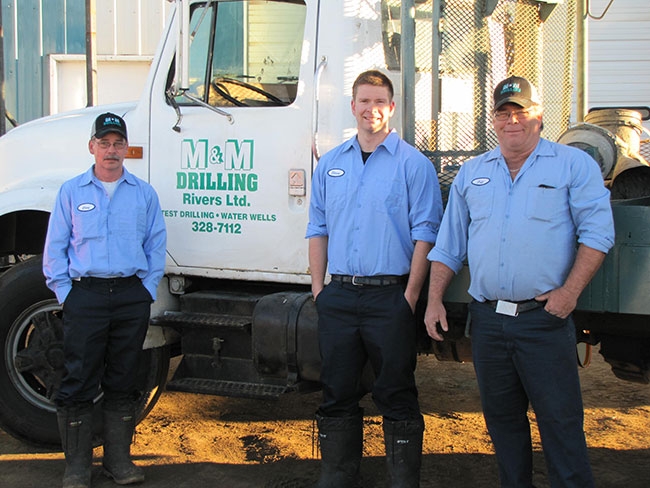 Started by his father, Maurice, in 1964 under his own name, it quickly became M&M Drilling Rivers Ltd. (not to be confused with M&M Drilling of Alberta).

Maurice was born in Walpole, Sask., in 1937 on the family farm. Later in his late teenage years he went to help his older brother Edgar install the sewer and water in Rivers. That’s when he met his future wife Marilyn. Soon after getting married he started working with International Water Supply out of Saskatoon, where he learned to drill.

“The first few years were really lean,” Dickson says. “It’s always tough to establish a company in a new territory.” He remembers his father saying the helper made more money than he did.

Now 50, Dickson started working with his father while in high school in the early 1980s. The work wasn’t easy but he liked it from the start. He recalls an early job: “There was a stuck pump straight north of us about 20 minutes. We had the rig set up over the well and tripped pipe with an overshot on it to try and retrieve the stuck pump. We tripped pipe for two days out of that 300-foot well till we finally got the darn thing out.  I was played out, exhausted, and thought, ‘What the heck am I doing this for?’ ” he says with a laugh.

Dickson has a lot of respect for his dad’s work ethic. They had to use steel casing instead of plastic, and every well was really developed, he says. “ ‘Anyone can punch a hole in the ground,’ my dad used to say. ‘Now let’s make it clean and pump good.’ ”

In 1984 the second-generation driller took a two-year course in water well drilling at Staples, Minn., that gave him experience with a wide variety of equipment and techniques and put him shoulder to shoulder with drillers from across the U.S. and as far away as Egypt.

In 2007, he bought out M&M from his father, who stayed active in the business, often providing a sounding board for “the next weird thing about a well or hole going bad on you.” They used to cover from the U.S. border to as far north as Thompson and from Saskatchewan’s border to Ontario’s, but now typically travel within a 100-mile radius. The main formations they encounter are sands, gravels and shales.

Dickson says there are plenty of acreages and cottages being built in the region. “It’s fairly wild country,” he says, and almost on cue during our phone conversation, a deer appears in the backyard of his family’s five-acre property on the edge of Rivers.

The bulk of their work is in drilling new water wells. They could be anything from a one-gallon-per-minute house well in a terrible location, to an irrigation well yielding 2,000 gpm. They average 70 to 80 wells a year with the drilling season usually lasting from April to the end of November. The remainder of the work is with the pump-pulling rig. “We babysit a lot of irrigation wells and around 10 smaller towns and villages plus all the pipelines that are going in. When one of those pumps goes down, we shut the drill off and jump to the pump truck,” Dickson says. “They are important and essential pumps that need to be operational.”

They got into pulling pumps about 30 years ago when a job came up rehabilitating wells for a potato manufacturing company. After renting a pump puller from Friesen Drillers to do the job, they later purchased a rig. With town and pipeline pump work increasing, his has been one of the faster growing segments of the company, Dickson says.

Government partners
One aspect of the family business holds a special place in Dickson’s heart. His father had fruitful working relationships with provincial government representatives. Maurice worked on many provincial parks and municipal wells over the years with the help of Arne Pedersen, a hydrologist with Manitoba Water Services Board, and Lewis Hopper, an experienced driller hired by the province to oversee completion of the wells.

“They were a team,” he says. “Arne went out first and did the test drilling and pump testing of the formations and design the well, and Lewis would come in and help out when the well was being installed.”

“Arne was very helpful on the screens, having designed a slot size mated to a sand size that will work at maximum rates in everything from cobblestone to powder,” he adds.

Dickson has fond memories of working with this veteran team over the years. “They made it a pleasure to work with them. The jobs just
went easier.”

Maurice and Arne were particularly in tune, the younger Dickson says. “They always seemed to arrive at the job site at the same time, seconds apart no matter where the job was.” They died within months of each other – Arne in October 2014, Maurice the following February 2015.

Dickson and his wife Bonnie, a nurse, have three children. Brendon, 28, is a heavy equipment operator; daughter Shandra, 25, is a nurse; and Shane, 23, graduated last year from Brandon University finished the year off full time with M&M.

Shane has worked summers in the business since he was 15 and may represent the third generation of drillers – if he chooses, Dickson says.

Dickson found his other employee, Cory Sedgwick, through word of mouth. Rooster, as he is nicknamed, is a backyard mechanic with a strong work ethic. “He can MacGyver anything to keep us going and finish the job,” Dickson says.

Besides materials and fuel, Dickson’s biggest cost is labour. “There is nothing glamorous about our line of work. I believe in paying the boys above-average wages for their hard work,” he says.

The price of wells has gone up over the years. When Maurice started, it was $5 a foot for a well, Dickson says. Now it is $50 a foot plus extra for the screen and sand pack. “The prices need to be up there to cover the costs.”

Because most of the work he gets is through word of mouth, he believes in building trust. “Bad news travels a lot faster than good news. You can’t please everyone, but we sure try to keep everything at 100 per cent.”

One way they do that is by thoroughly developing its wells. International Water Supply taught Maurice how to develop wells so there were no problems later on, a practice he passed down to his son. “It’s all about getting the mud out and letting the water come in faster, using everything from surge blocks to jetting,” Dickson says.

Educating the well owner is another aspect of good customer service. Most people don’t understand what is involved in getting the water from the ground to their taps, he says. He likes explaining the process and welcomes questions.

To be in this business, you have to be willing to learn, Dickson says. “No two wells are the same.” Even within a few miles the wells can change dramatically, he says, noting that he has drilled 17-foot and 393-foot wells on the same stretch of road.

What does he like best about his chosen field? “My drilling buddy Kevin Thomas often says, ‘You’ve always got to be using your head.’ Whether it’s a stuck pump to get out, or an acidization job on an old well, or drilling straight through a big rock – it all uses your brain.”

One of the hardest jobs is when you encounter a flowing well, he says, and Rivers sits beside one of the worst flowing well areas in Western Canada. “One hole got away from a driller and flowed uncontrolled for a few months at around 1,000 gpm,” he says. “Dad was offered $20,000 from the government to seal it. He declined and went on a time-and-materials basis to fix it. The homeowner had a two-inch well to run his house, and the bill came in at $14,000. “It’s not the flow, it’s the pressure that gets you – this one had 32 psi on it.”

When asked where he sees the industry in the next five years, he says, “We’ve got to get the pipelines stopped is what I see. I am not a big fan of them. They have their areas where there is little or no water that they are needed, but when they start taking away jobs for us, then something has to give.”

“It’s almost a dying art,” Dickson says. “But Dad thought he would have run out of drilling wells years ago, and each year the phone still rings.”