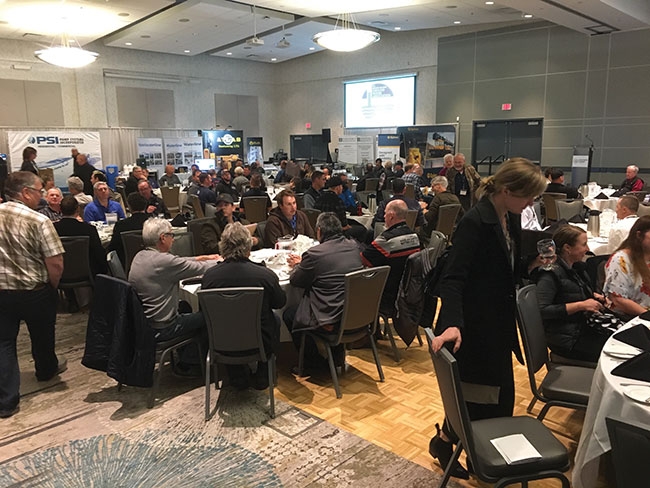 About 150 members of the British Columbia Ground Water Assocation gathered in Langley in April for its annual convention. Photo courtesy BCGWA

The BCGWA held its annual convention, trade show and annual general meeting April 10-11 in Langley, B.C. The event was well attended, with approximately 150 members coming out and some 25 manufacturers and suppliers exhibiting, estimated David Mercer, the association’s general manager.

A two-day drillers course was developed and run by association members. The course’s 30 spaces were filled, with several more on a waiting list, suggesting plenty of drillers are interested in upgrading their skills, Mercer said. Last year the association hosted a pump installers course and next year they may consider offering another type of course such as confined spaces training, he added.

Dave Mercer said training will be a focus going forward and “I have another goal of growing the membership.”

McEllhiney Distinguished Lecturer Gary Hix gave a talk entitled “Drilling markets change – so must we.” Hix discussed the need to be aware of market changes brought about by economic conditions and technology transformations. He offered strategies on how to adapt and how to structure your business operations to ensure profitability. Ground water professionals need to consider what services their potential customers are demanding, Hix said.

A panel on flowing artesian wells focused on interpreting the Water Sustainability Act, which came into effect in February 2016. The panel tackled the question of what is the liability of drillers when they encounter a flowing artesian well and how can contractors help protect themselves and their businesses.

BCGWA Board of Directors
Executive committee:

For more information on the association, visit bcgwa.org.