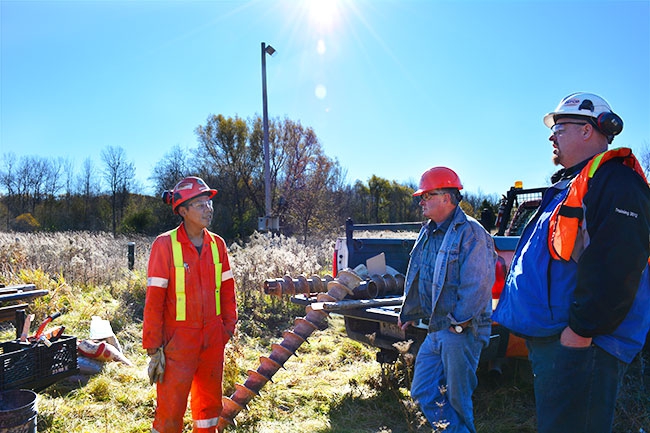 Gord Bailey was born to teach, but he didn’t always know it.

The young water well driller was working on site for Carl Baldwin Well Drilling in the early 1980s when Tim Casey, then professor and co-ordinator for the Resources Drilling and Blasting program at Sir Sandford Fleming College’s Frost Campus in Lindsay, Ont., brought his students by to observe someone in the industry at work.

While the students observed his technique, Casey noticed Bailey’s ability to connect with students and communicate what he was doing. He encouraged Bailey to apply to join the college’s staff.

But it was his wife, Marie, who was instrumental in his decision by pushing him to take on the challenge of bringing his practical knowledge into the classroom, Bailey said.

“I never would have done it had she not told me I’d make a good teacher,” Bailey said in an interview with Ground Water Canada in July.

One might expect the newly retired professor to be putting up his feet, but although he is decidedly gearing down – he shifted from head of the program to professor a couple of years ago, handing the reins to Steve Wilkinson – he is full of plans for the near future.

Bailey is still on staff at Fleming, where he’ll carry on as contract trainer in the fall teaching a four-day course for public health inspectors. He is also planning to teach a hands-on course on drilling fundamentals next May at GEFCO’s headquarters in Enid, Okla.

Bailey has been in the business of teaching for 33 years, but his well drilling career dates back to his teenage years.

“We lived in Toronto and my father’s cousin had a farm,” he recalled. “We would go up to the farm on weekends and groundhog hunt and fish and stuff like that. The farmer had a son who had a son that was my age. Being in the country, he had no one to play with in the summer. When I was nine or 10 years old, his parents said, ‘Do you want to spend the summer here?’ I said yes, so I spent all my summers there working on the farm. The farmer’s son – Carl Baldwin – had a water well drilling business and I started working for him when I was 15. Right out of high school I started working for him full time.”

Bailey then worked for G. Hart & Sons, which was founded by the grandfather of current owner Clarke Watson.

He liked the work, but when the opportunity to teach came along, he accepted it and found he loved teaching even more.

When Bailey joined the staff, the program had just 15 students and a trio of equipment – a blast hole drill, a cable tool and a geotechnical drill. Today the program typically takes in between 100 and 200 students, depending on the time of year and number of semesters running. “We have our own building with dedicated classrooms and modern equipment,” he said.

A memorable donation was made by former Mineral Engineering Technology program student Duane Parnham in 2012.

“That was a good Monday morning,” Bailey recalled. The donation went a long way, garnering the program a new mobile geotechnical drill, two Tamarack blast hole drills, a mud reclaiming system and improvements to the training facility, which was fittingly renamed the Parnham Training Centre.

As part of the program, he’s worked on courses in Oklahoma, Ethiopia, Nova Scotia and Newfoundland, trained the Canadian Armed Forces, the Ministry of the Environment SWAT team, drilling contractors and public health inspectors needing continuing education credits. One year they did a water well driller and pump installer apprenticeship program.

They teach the foundations of drilling and related skills such as preventive maintenance, hydraulics, pump systems and identifying soil and rocks.

“We’re at the grassroots level of why a pump works: what determines pressure, volume and maximum pressure,” he said. Although technology changes, the principles behind them are still the same, he said, and students can apply the basic skills they learn in many situations. “As long as a student leaves here with a good grasp of the fundamentals, they can build their career on that foundation.”

How does he know when a student gets it? “I ask them an indirect question and by their answer I know if they comprehend the concept,” he said. “Sometimes they tell me, ‘Now I get it. It finally makes sense.’ ”

Most graduates find work in North America and a few go overseas. The program feeds several industries, among them water well, geotechnical environmental, construction drilling, and blast hole drilling and blasting, he said, noting that today’s students are focused and passionate.

“What I’d like to see for our program is what we’ve been doing and what is currently happening, that is, we’re always updating and changing with the industry. I think it’s important to always keep abreast of what’s happening. Our success is based on providing the industry with people who can make them money and work safely. We’re able to change our curriculum and that’s why we’ve been successful. Our salespeople are our graduates and you have companies that will only hire our Fleming grads or hire a Fleming grad over another. They’ve had good luck with our students. Those are our ambassadors.

“The best part of the job is being able to make a difference in a student’s life,” he said. “My greatest pleasure has been in teaching the soft skills,” he said. “It’s rewarding to feel you’re making a difference while they can still be influenced and before they become set in their ways.

“They all have a story. Lots of things going on in their lives and lots to deal with. You’d be surprised.”

As for his own life, Bailey has plenty going on. He and Marie have three daughters – Jennifer, Caitlyn and Melissa. They have four grandchildren under 10 – and one on the way.

He plans to spend more time with his family and do more babysitting now that his schedule has slowed down.

Bailey thinks the trades are coming into their own – and it’s about time, in his opinion. University students are coming to college to get skill sets they couldn’t get in university, he said. “The need for training is increasing,” he said, noting that public health inspectors need continuing education credits as well.

As evidence the trades are valued, he cites the woman who flagged him down at a highway rest stop to tell him how much her son had got out of his time in the program. “She said, ‘After a few months, he is making more money than his two sisters put together who graduated from university.’”

In April, more than 100 of Bailey’s former students, industry people, Fleming colleagues and Bailey’s family surprised the low-key educator with a retirement party he won’t soon forget. “It was overwhelming,” Bailey said. “Some of these people I hadn’t seen in years. Some travelled quite a distance. They gave up their Saturday to come out for me. It means a lot.”

Bailey’s passion for people has gained him many fans over the years. On his retirement, a number of people donated money for a bursary in his name. “This is an entirely appropriate legacy for Gord,” Fleming teaching colleague and former student Jim Smith said. “He’s all about giving back to the students.”

“I guess you could say Gord is the guru of applied learning,” Smith says. “He doesn’t realize the impact he’s had in setting people on the right path.”

“Certainly Gord’s teaching style is unique and very much hands on,” said Greg Bullock of Eades Well Drilling, a Fleming colleague and former student. “I always remember him saying, ‘You’ve got to try to get your head down the hole’ in terms of trying to find out what’s going on, if you’re having a problem, if you’re hitting a boulder, if the pipe’s gone sideways. That’s a true-blue Gordism.”

Fleming College program co-ordinator Bill Smith has his own take: “When I think of Gord, two things come to mind: passion for students and safety advocacy,” Smith said. “He is safety-crazy and keeps students looking over their shoulder, which prepares them for work at companies that are safety-conscious. He leads our office by example.”