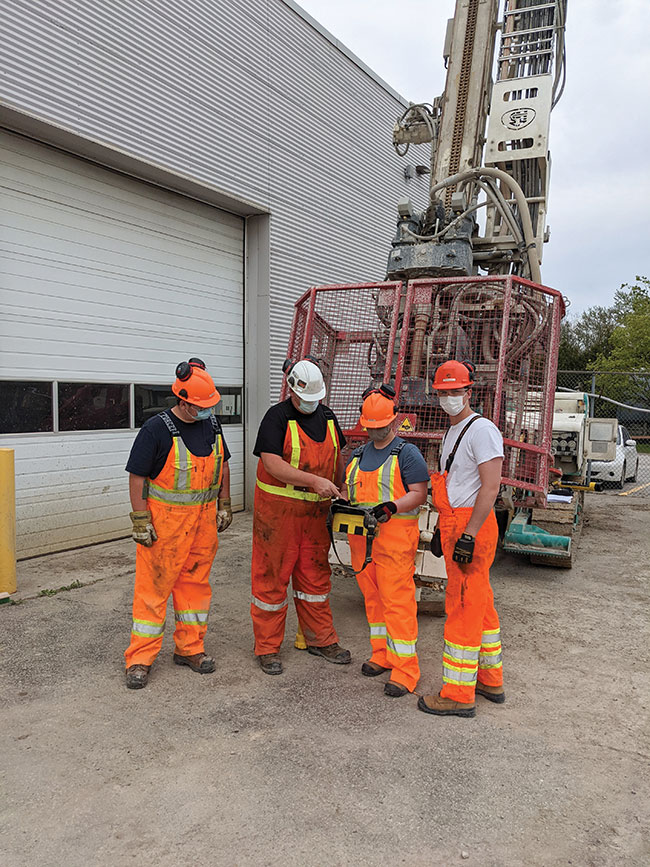 Mentoring is a key part of the resources drilling and blasting program at Fleming College. Here Jim Smith, professor in the department, guides students through hands-on learning. From left, George Smith, Jim Smith, Jennifer Moon and Aidan Cook. “I want them to leave me in the dust, because then I know I’ve done my job.” PHOTO by Jim Smith, Fleming College

While recruiting employees in the water-well industry is hard enough, just as challenging, if not more so, is finding good employees who stay. Some may work for a while, then leave for jobs elsewhere.

Others just don’t seem to catch on to the work or the expectations.

These are concerns Jim Smith, a professor of more than 15 years in the resources drilling and blasting program at Fleming College in Lindsay, Ont., hears often from drilling companies. He understands the challenges from both perspectives: that of the new employees and that of the employers. Smith, like everyone else on the teaching team at Fleming College, has experience in field. Several, including Smith, spend summers and holidays working on drill sites.

“We still have our boots dirty, connected to the industry,” Smith says. “We know, being experienced in the industry, what it takes to be successful.”

Mentoring is a key part of the program at Fleming College.

“Our mentoring job is not only to teach them the curriculum, to do the training hands on in the field, but it’s also the soft skills, as we call it, that will make you successful in this industry.”

Smith lists attitude, work ethic, being on time for work and being prepared to work as some of the soft skills students need for their first job. Once the students have graduated, they are ready to be hired – so they can learn more.

“They have a foundation from us, but they’re not drillers yet,” Smith says. “They need to spend time on the back of a rig learning.”

Something to keep in mind is that students are different today than, say, 20 years ago ¬ and it’s not their fault.

“Years ago, you would take a farm kid, you’d throw him off a tractor or throw him on a drill and away you go,” Smith says. “Kids today are different. They’re mechanically different.”

Smith recently asked a class of 10 how many had ever checked the oil in their own cars – only five had.

“We’re not talking changing oil – just checking it,” he says. “And you can’t blame the students. They live in a different world. Twenty years ago, everyone worked on their own cars. They did stuff to their own vehicles or their own lawnmowers. They would tinker and fix. It’s different today.”

Up-and-coming drillers know they need to learn, and they need companies willing to help them learn.

“We give them a foundation – the big picture of what their job looks like and the foundational roots of knowledge,” Smith says. “Then hopefully, the companies come on board and partner this new person with someone who is going to be their mentor.”

Mentoring in action
At Drillwell Enterprises in Duncan, B.C., mentoring is a huge part of staff training and retention.

“We have a particular way of doing things here, and rather than bringing on new employees with outside experience, we like to hire young people who are new to the industry and train them from scratch,” says Shawn Slade, third generation in this family business. “There are some orientations and training to get a new employee to be safe and productive on a drill site. After that, the furthering of skills and knowledge primarily happens through mentoring.”

“Most of the jobs are two- or three-person crews, and so there is a lot of one-on-one time to build personal relationships, ask questions, teach and learn,” he says. “Of course, some people are naturally better at mentoring than others and some personalities don’t mesh as smoothly as others, so sometimes the teams need to be switched up.”

Slade says a good mentor is patient, approachable and an expert in their trade.

“You need to have that expertise to pass it along,” he adds.

While there is no formal structure to mentoring at Drillwell, there are expectations.

“The mentoring process doesn’t happen with everyone, at least not from the beginning,” Slade says. “Mentoring someone does take time and energy, and you aren’t going to waste resources mentoring someone who isn’t engaged or who you don’t expect to stick around.”

“Once those things have been demonstrated, they have earned the right to be mentored,” he says.

“We check in to make sure both sides are doing their part,” Slade says.

The payoff for intentional mentoring: skilled, loyal employees who stay – Drillwell is notable for its low staff turnover.

“Our drillers are all long-term employees with lots of experience – not just in the industry, but here at Drillwell,” Slade says. “They gained their skillsets primarily through mentoring, and they understand the need to pass it along.”

Building mentorship into your business
A Google search for creating a mentorship program brings up thousands of pages of tips and templates to get you thinking in the right direction. Smith says the first step is to decide who on your team will be the mentors, and whether they are equipped with the skills to be a good mentor.

“A mentor is a teacher, someone who is there to help [new employees] get to the point where they can operate their own rigs safely,” Smith says.

While being competent on the job is vitally important, so is being able to communicate clearly and patiently.

“You don’t put [a new employee] with a driller who doesn’t like to talk to people,” Smith says. “You want someone who can communicate, who likes people, who wants to share knowledge, who is capable of sharing knowledge. I think intentionality around those key points by a company would help them progress new people into drilling positions.”

It comes down to relationships and competencies, he says, and suggests holding an afternoon session with team members to discuss the mentorship role and put it on paper.

“Or at least have a group conversation about, ‘Why does Joe over here do so well with the helpers he has, and six weeks later, they’re ready to take on the rigs?’ Well, maybe Joe was doing something really, really good. Talk about it. Get it out. Put it to paper maybe. Maybe put a policy in the company saying, ‘Joe is going to get them first because he does a really good job.’ ”

Talk about the qualities you want to model to new employees.

“Questions need to be asked every week by either by a manager or a supervisor: ‘What did you learn this week? Explain that in a little more detail.’ ”

The purpose of the mentorship is to transfer knowledge and experience to a new generation. If the new employee isn’t learning anything, then they are just a helper doing a job, filling a space without making any progress – and without any reason to stay.

“Your goal as a mentor – and this is where you need to be confident in who you are – is that the person you’re mentoring would eventually have all of your knowledge and more,” Smith says. “I want them to leave me in the dust, because then I know I’ve done my job – when they are as competent as me and even beyond what I can do.”

That’s the kind of mentorship that can build careers for new drillers and a future for your business.

Carolyn Camilleri is a Toronto-based writer and editor. She has been writing for consumer and trade magazines, as well as businesses and organizations, for more than 20 years.