An interview with a P.E.I. ecological water scientist 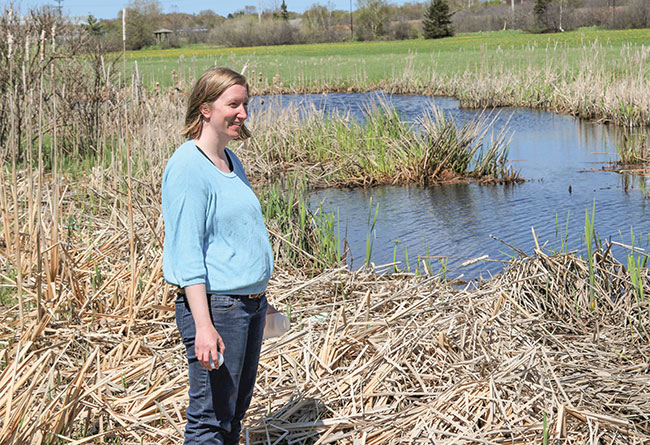 Ecological water scientist Dr. Audrey Murray is studying ways to mitigate the effect of chemicals and nutrients in the ecosystem. One solution is to create wetlands on farmland to filter water from fields before it enters other watercourses. Photo credit: Dr. Audrey Murray.

As anyone connected to the water industry knows, the importance of ensuring a clean, sustainable water supply cannot be overstated.

Predictions for future water supply and quality are often dire, especially in places like Prince Edward Island, where freshwater is limited and depends on rainwater and snowmelt.

That’s why the innovative work of Dr. Audrey Murray, an Agriculture and Agri-Food Canada ecological water scientist at the Charlottetown Research and Development Centre (CRDC), is so exciting. She is researching natural, sustainable solutions to preserve water and care for the natural ecosystem surrounding agricultural lands.

“P.E.I. has a high density of agricultural land, and the fisheries are also a very important industry so water quality in general – not necessarily just freshwater – is of high importance to everyone,” she says.

Dr. Murray is an environmental engineer with a PhD focused on wastewater treatment, specifically the removal of emerging contaminants from wastewater. She did her post-doctoral work with the Drinking Water Research Group at the University of Toronto and focused on disinfection by-products and trace contaminants in drinking water. She has been at the CRDC since last July, where she is focused on emerging contaminants, such as pesticides in agricultural runoff. It’s a natural fit for her expertise.

“We have some issues with high nitrate levels,” she says, adding that 97 per cent of nitrates in the Northumberland Strait have been shown to originate from P.E.I. “We receive heavy rainfall events and have shallow well-drained soils which lead to high sediment loads in water – with attached pesticides – and also have the potential to cause pollution events.”

Dr. Murray says farmers are acutely aware of these issues.

“I’m interested in supporting them to implement easy and cost-effective solutions to remove potentially harmful chemicals and nutrients from the water cycle to mitigate the effect to the entire ecosystem on Prince Edward Island,” she says.

One of these solutions involves constructing wetlands on farmland to filter water from farm fields before it enters other watercourses.

“Wetlands are known as the ‘kidneys of the ecosystem’ and have water filtering and purifying abilities beyond that of other ecosystem components,” Dr. Murray says.

The importance of wetlands
At the same time, wetlands provide natural habitats for diverse species of plants, insects, amphibians, birds, waterfowl, and other wildlife. They can even play a role in sequestering carbon and contributing to the reduction of greenhouse gas emissions to address climate change. Several wetlands have already been constructed on P.E.I. and data is being collected.

“We have only preliminary data so far, but the wetlands have begun to increase biodiversity,” Dr. Murray says. “Results from other areas show that wetlands are capable of treating nutrients, sediments, and pesticides.”

As the work continues, more farmers are seeing the value of the wetlands and are getting involved with re-development.

“Vegetated drainage ditches began as a way of mitigating some of the concerns associated with on-farm drainage – that drainage provides a direct conduit for pollutants to surface waters, reducing the retention time across land and decreasing the opportunities for natural mitigation,” she says. “By widening the ditches, slowing down the retention time, and planting wetland species, researchers found that the properties of wetlands that made them so great at water treatment could be incorporated right into surface drainage.”

She notes that they are using the technology differently on P.E.I. than in other places.

“P.E.I. has quick-draining soils and farm drainage is not common, but I am installing the VDDs to intercept surface runoff and provide edge-of-field treatment, so they will be used more like on-farm constructed wetlands but will have a size and shape more similar to a ditch.”

The goal is to slow down the water in the VDD using a clay liner, for example, to provide adequate retention time to treat pollutants.

“Pollutants, including pesticides, can be naturally treated within the ecosystem, but not if they do not have adequate retention time before reaching ground water or surface water,” she says. 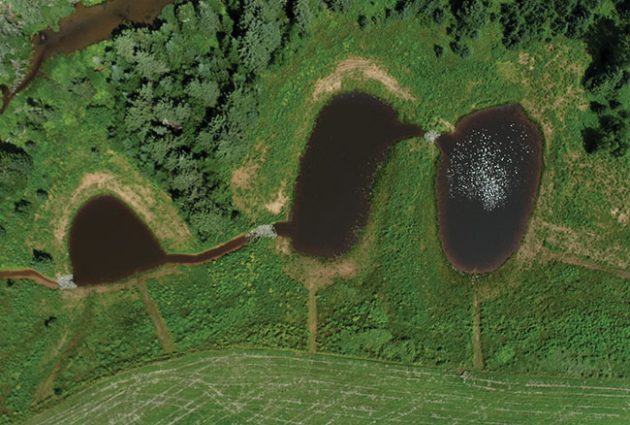 Other benefits
While filtering pollutants out of water is a key benefit of these innovative solutions, there are other benefits.

“Wetlands are very biodiverse,” Dr. Murray says. “They also contain a lot of sub-environments within the same wetland. There are plants to provide phytoremediation and support microbial populations, there is exposure to UV from the sun, there may be aerobic and anaerobic zones within the wetland, there are surfaces for adsorption. From a wastewater treatment perspective, each of these represents a removal mechanism or unit process that can remove pollutants. These mechanisms work together to remove a wide range of pollutants with different characteristics.”

She adds that we are expecting more intense rainfall events because of climate change, so the issues we are facing now are only going to get worse.

“Surface storage of water in the form of wetlands can reduce flooding and mitigate some of the impacts of this,” Dr. Murray says.

Ultimately, the link between water and agriculture is immense.

“We need to look at agriculture from an ecosystem perspective to find ways to build some of those ecosystem features back into our farmland and increase resilience again.”

While Dr. Murray says her expertise is not in groundwater, she knows there are nature-based treatments for groundwater and sees potential for working with experts in the field.

“It can be more difficult to remediate groundwater than it is to prevent pollutants from reaching groundwater to begin with,” she says. “I would say that I need to work alongside groundwater experts to determine the right balance – small changes, like putting in a vegetated filter strip to slow down water flow, can improve the quality of surface water but increases infiltration and can increase concentrations of soluble pollutants such as nitrates in groundwater. If we are looking at agriculture from an ecosystem perspective, we need to work together and understand these interactions.”

While the present focus of her research is on PEI, Dr. Murray says there are probably many other parts of the country and world where these solutions could be even more easily adapted than P.E.I.

Carolyn Camilleri is a Toronto-based writer and editor. She has been writing for consumer and trade magazines, as well as for businesses and organizations, for more than 20 years.

P.E.I. research project explores potential for undersea groundwater
Prince Edward Island’s 100 per cent reliance on groundwater has forced the province to be cautious as to how it is used. As such, studies are ongoing to explore the potential for groundwater undersea as a possible freshwater source for coastal communities.

A project being conducted by the Ocean Frontier Institute off P.E.I.’s north shore is searching for groundwater below the floor of the Gulf of St. Lawrence. The search involves seismic testing of cracks of the sea floor to determine the presence of groundwater, followed by an electromagnetic exploration to identify any existing fluids.

The discovery of viable groundwater in the sea could be of extreme importance to residents on the island. Climate change is believed to have a negative impact on water flow, affecting what is available to the province.

Researchers hope to know not only how much water might be present but how much of it can be used.

The research team is also exploring if aquifers under the sea are connected to those under the land mass, allowing for the modeling of possible extraction.

The impact on P.E.I. residents, as to how they might be affected by a potential new groundwater discovery, is another component of the research project.