Features Drilling
All in a day’s drilling 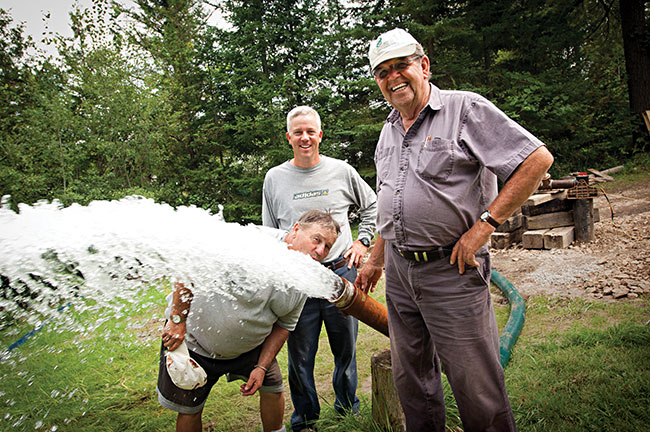 Water-well drilling is a serious business. Still, engineer Bruce Hietkamp managed to find a photo that shows the fun side of working in the field. We call it “Taking a Drink” and it’s the winner of our first cover photo contest.

Hietkamp is principal and president of Geo Kamp Ltd., a small environmental consulting and contracting company in Oakville, Ont. He is a registered hydrogeologist, engineer and Ministry of the Environment-licensed well technician who has been working in the water well industry since 1988.

In our winning photo, Hietkamp stands in the background while Roger Boadway of Roger Boadway Enterprises Ltd. in Sutton, Ont., grins in the foreground and driller Phil Brown takes a drink. The photo is of a well the team constructed for a trout hatchery near Mount Albert, Ont. The well was performance tested for 24 hours at 2,000 litres per minute, Hietkamp says.

“The photo was taken in August 2011,” Hietkamp says. “We broke apart the hose near the end of the 72 hour pumping test to make the pumping a bit more dramatic.”

The job involved the installation of 30 feet of eight-inch-diameter telescoping well screen: 20 feet of 125-slot screen and 10 feet of 80-slot screen, Hietkamp says.

One challenge was to drill to bedrock, he says. “We wanted to confirm the depth to bedrock but the coarse gravel made it difficult to finish the bottom 10 feet. Bedrock was encountered at 202.5 feet.”

Roger Boadway remembers that the material was wet from five feet down to about 150 feet. “Getting 8-5/8-inch casing down the hole was hard,” he says. “We had to hold the ground up around the casing so we could pour the Quik-Gel fluid, which is double the weight of water.” They had to drill a 12-inch hole to contain the casing.

The trout farm is located in a basin with high hills all around, the contractor says – an ideal situation that allows for a gravity-fed well producing 200 gallons per minute.

Boadway’s grandfather, Frank, established a dug-well business around 1880, and, after it switched to drilling wells just before the First World War, the family has run the business. Roger, now semi-retired, is happy to hand off to the next generation. That includes son, Grant, who heads up operations, and daughter Lynor, who runs the office.

Geo Kamp and Boadway have partnered as hydrogeologist and well contractor on many ground water resource projects from fish hatcheries and irrigation wells to potable water supplies.

“It was a pleasure working with Bruce,” Boadway adds. “We’ve worked together on other sites as well.”

Congratulations on a team effort that yielded not only a good flow of water but a photo that captures perfectly what water well drilling is all about! 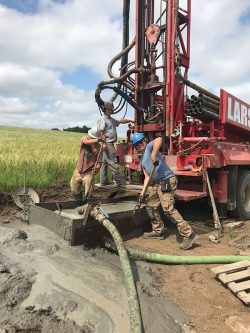 Under an Alberta Sky: Larson’s Water Well Drilling, Lougheed, Alta.
The wheat fields on a farm south of Edgerton, Alta., provide a stunning backdrop to Larson’s Water Well Drilling hard at work. Office manager Sheena Larson snapped the photo, which captures a team drilling a well for an farm acreage last summer. Larson says it was a 280-foot double-pack screened well that produced 50 gallons per minute of soft water. Johan Wiebe is at the rig while Logan Teers and Ethan Barton (in the blue hard hat), ream the hole before running the six-inch casing. 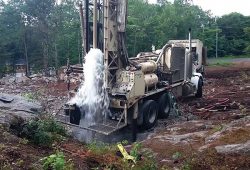 Beautiful Find Captured on the Fly: Puits Lanaudiere, Saint-Charles-Borromée, Que.
Raphael Tremblay of Puits Lanaudiere in Saint-Charles-Borromé, Que., sent in a photo that shows a flowing artesian well. The star of the photo may be the water but the photo also shows one of the versatile and energy-efficient crawler drills the company manufactures to manoeuvre in confined areas, Tremblay says. 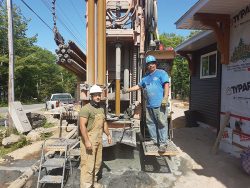