Water isn’t the only gold on Valley Well Drillers’ map 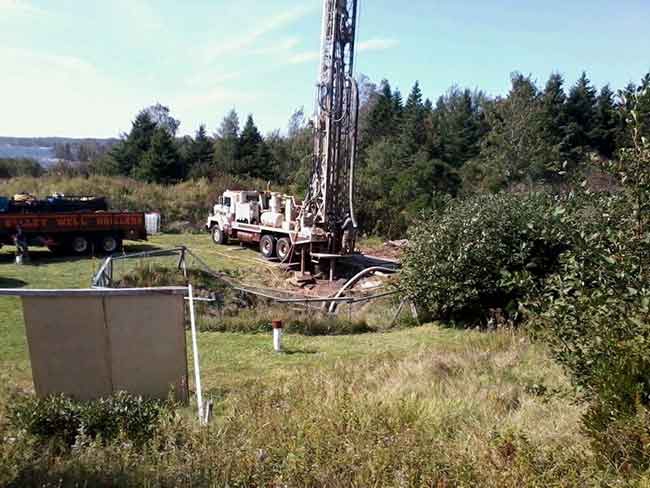 For two decades, Jordan Rogers and his team have been helping to dig for fabled buried treasure on behalf of some very determined explorers on Oak Island off the south shore of the province. The “money pit” area has been open-pit mined to 150 feet in the past and filled back in, Rogers says. Photos courtesy Jordan Rogers

Jordan Rogers is fulfilling every child’s – heck, every adult’s – fantasy. When his company, Valley Well Drillers in Waterville, N.S., is not drilling for water, it goes in search of something else. Gold, that is – Atlantic treasure!

For two decades, Rogers and his team have been helping to dig for fabled buried treasure on behalf of some very determined explorers on Oak Island off the south shore of the province. The Curse of Oak Island, a reality show chronicling the hunt, has aired on the History Channel since 2014, making Rogers and his team minor celebrities in their circle.

“You don’t see too many water well drillers on TV,” Rogers says, with a chuckle.

Theories abound about a mysterious pit and its location on the island. Some scholars say pirate Captain Kidd buried his fortune there in the 17th century. Others say exiled Knights Templar dug the pit and that it might contain the Holy Grail or the Ark of the Covenant. Still others say the pit hides manuscripts showing Francis Bacon to be the author of Shakespeare’s works. Rick and Marty Lagina, brothers from Michigan who bought the rights to much of the island in the 1990s, enlisted the help of Valley Well Drillers to try to solve a mystery that has intrigued people for 200 years, several of whom have died trying to strike it rich.

They have been doing work on the project off and on since the mid-1990s. “We look for mine shafts, dug wells, and we’ve found wood at 200 feet. Some claim there are more than 1,000 wells drilled on the island between 25,000 and 27,000 feet,” he says. “The ‘money pit’ area has been open-pit mined to 150 feet in the past and filled back in. We have to drill with an overburden system to keep circulation and drill through everything ¬ boulders, gravel, till, large amounts of water and even wood – and hopefully not hit steel or another borehole.”

Rogers believes what was on Oak Island may have been found in the past, melted down and sold, but concedes, “It would make me and a lot of other people happy if something new was found to address some of the unanswered questions.”

So who are these treasure-hunting drillers?

The home base of Valley Well Drillers lies in a picturesque part of Nova Scotia’s Annapolis Valley where the valley’s sandstone and shale meet the North Mountain’s basalt rock and the South Mountain’s granite and slate.

Owner Jordan Rogers is a quiet, thoughtful contractor who took the reins of the 41-year-old business in 2009 when his father, Bruce, retired.

After Claude’s death in 1979, Bruce Rogers followed in the business, as did his brother, Jordan’s uncle Kirk, who established KD Rogers Well Drilling in nearby Centreville, now run by his sons Brent and Logan.

“Basically, if your name is Rogers and you’re in the Annapolis Valley, you’re either a well driller or related to a well driller,” the third-generation Rogers says.

It was not his father’s intention that he follow in his footsteps. “My father tried to steer me around 16 years ago,” he says. “He wanted me to do anything but well drilling.”

Rogers tried his hand at a few different jobs and contemplated going out west to get into oil work, but it didn’t take him long to realize water well drilling was the path for him.

As teenagers he and his older brother and younger sister were expected to work in the family business washing, cleaning and doing other miscellaneous duties. As an adult, he came to enjoy the work.

Over the years, the business has offered a number of services, including residential, commercial and municipal rotary water well drilling, video camera inspection and well decommissioning.

After taking over the family business, Jordan Rogers, a licensed well driller and pump installer, expanded the company’s services to include pump installation and geothermal drilling. Geothermal has since seen a downturn, as it has elsewhere in Canada, but there is a small demand for it in the inner valley where there is lots of water for supply and return wells, Rogers says. He adds that most of the demand now is in residential work.

They do commercial work when the opportunity arises. Three years ago, for example, they drilled an 18-inch well about 700 feet deep for a local chicken processor.

Rogers and his two-employee team have one rig – a Speedstar 25K – that was brand new in 1988. “We bought it from Rocky Milanto of GEFCO, the regional manager,” he says.

Most of the work done by Rogers and his team happens within a 200-kilometre radius of the office – “home base,” as he calls it. They do video camera well investigations, often uncovering such problems as a lack of sufficient well casing. This occurs in older wells – some 20, 30 or 40 years old – and lets in contaminants.

Local contaminants include nitrates from nearby farms. Annapolis Valley farms have high nitrate counts, Rogers says. Another common source of contamination is earwig infestation. If a well does not have a proper well cap, earwigs can get into the well and die on the water. Get enough dead earwigs in your well and you may have to blast them out to prevent fecal contamination, he says.

Treasure hunting may be a tall order, but Rogers says his biggest challenge is finding enough time to do everything he needs to in a day – and carving out a couple of hours for himself.

A typical day sees him up at 5:30 a.m., grabbing two cups of coffee, tackling some office work and starting drilling work at 6:30 a.m. “We average 10- to 12-hour days,” he says, sometimes pushing through to get a job done. One day, he hopes to have a less hectic schedule. “I’ve been training an employee, Cody Pineo, to operate the rig and he’s getting good at it,” he says.

Rogers shares the industry’s recruiting challenges. “To find good people, you have to pay the right price,” he says. “You can get just about anyone for $15 an hour, but to find educated, hard workers, you need to go up to $20 an hour.”

He puts a lot of stock in belonging to the Nova Scotia Water Well Drillers Association. “We get to discuss any problems with our regulations. Usually they have a person from the government there to see what we’re talking about and note any changes we need made,” he says. At the last annual general meeting and awards dinner in Dartmouth, they also had some great musical entertainment with a kitchen party, he adds.

That 2015 event holds special meaning for Rogers; he was awarded the recently established customer service award for well drillers as a roomful of members erupted in applause.

“I was surprised,” he says. “We had just finished dinner, I closed my eyes, having a little catnap, and I heard my friend say, ‘Jordan, you’d better wake up for this!’ ”

The awards are given to pump installers, well drillers, well diggers and founders who have “exceeded expectations or did a ‘good deed’ for a homeowner in need,” according to the Nova Scotia Ground Water Association newsletter.

For two decades, Jordan Rogers and his team have been helping to dig for fabled buried treasure on behalf of some very determined explorers on Oak Island off the south shore of the province. The “money pit” area has been open-pit mined to 150 feet in the past and filled back in, Rogers says. Photos courtesy Jordan Rogers

Providing good customer service means a lot to Rogers and his team. “Making sure the customer is happy – that’s the biggest thing,” he says. “With today’s social media, one angry customer can cause problems. The situation may be out of our control – we’re battling Mother Nature every day, but that customer’s still got to be happy when you drive off the property.”

Sometimes all it takes is communication and helping the well owner understand why things didn’t go as expected, he says.

Firmly behind this honour is Valley Well Drillers’ practice of giving to the surrounding community. “We do as much as we can for community events and programs,” Rogers says. The business has made large donations to Scouts Canada and to a new arena project. About four years ago, the team donated and installed a water supply and pumping system to a facility called Camp Brigadoon that draws special needs children from across Canada every summer to have a fun camp experience. Staffed by volunteers, the grounds include 10 cottages, a dinner hall and a meeting room.

Rogers clearly takes a lot of pride in helping out. “When someone asks, we usually can’t say no,” he says.

As for the future of the water well industry, Rogers believes the time has come to place a higher value on ground water and the work that goes into providing it. He is seeing a decline in the number of wells being drilled but no sign of prices going up, a situation he finds a bit troubling.

“Everyone is still charging the same price,” he says. “We talk about raising the prices and sometimes we get a small increase, but then it gradually works its way down because people are hungry for additional work.”

Rogers subscribes to the philosophy that a rising tide lifts all boats. “We should be working together, and if one company does well, they all will.”

As for the future of Valley Well Drillers, there seems every reason to believe the business will stay in the family. Rogers and his wife, Cara, have four potential treasure hunters – Ava, 13, Orin, 12, Maverick, 4, and Roy, 2 – and a fifth on the way in August.

Carrying on the tradition of family involvement in the business, he brings his two oldest along on jobs, in part to educate them. “It’s good for them to understand water, where it comes from and how it gets into the house,” he says.