Booths were abuzz at the NGWA Expo in Las Vegas 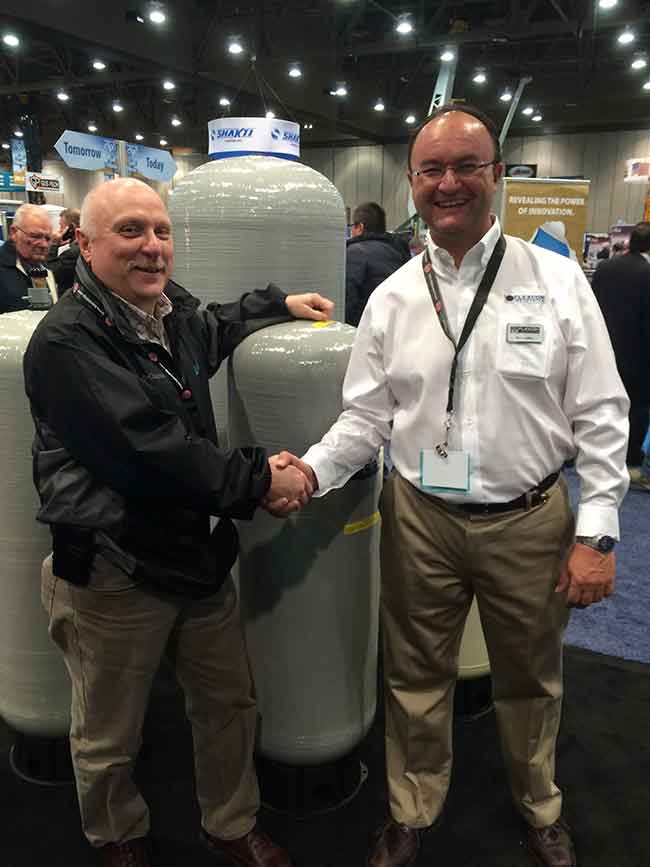 Dan Mutchler from Frontier Waterworks and Pump Supply in Edmonton (left) chats with Eric LeMay at the Flexcon booth.

The National Ground Water Association trade show and conference gave contractors a chance for some last-minute shopping as it returned to Las Vegas Dec. 15 to 17. By all accounts the event was a pre-Christmas success.

Expo started on the Tuesday with a full slate of educational offerings throughout the day. At night the event moved into full party mode with the attendee welcome reception sponsored by Franklin Electric. A buzzing ballroom of delegates and suppliers had the opportunity to renew acquaintances and discuss water-related topics over a few adult beverages and finger foods.

On Wednesday, after the opening ceremony with keynote speaker Ryan Hreljac, founder of Ryan’s Well Foundation, and the awards presentation, the show floor opened to a steady stream of water-well professionals looking to learn about the new products and services the 300-plus exhibitors had on display. The aisles were packed all day as well drillers picked up literature and spoke shop with the suppliers.

Dan Mutchler from Frontier Waterworks and Pump Supply in Edmonton said he loves coming to the show to meet with companies he does business with, to renew friendships and to learn about new products.

According to Vickie Crosby, director of sales for the NGWA, there were almost 30 first-time exhibitors on the floor in addition to many longtime vendors. There was much buzz before the show started and it exploded after the doors opened, Crosby said. She was pleased with the attendance as more than 4,900 delegates made the trip to Las Vegas.

That enthusiasm carried over into the second day of the show when the serious buying and continued discussions took place. There were also several on-floor educational sessions, including one from Rob Caho of Diedrich Drill talking about rig safety. A crowd gathered around Caho’s booth as he went over safety practices and things to look for before you start drilling.

Thousands of dollars were raised that afternoon through the annual National Ground Water Research and Educational Foundation auction, which featured 30 donated items. The foundation conducts education, research and other charitable activities related to a broader public understanding of ground water.

“We had an amazing turn out at our booth for this year’s Expo. It was great to get to talk to so many of our customers,”   said Susan Loit from Solinst.

Ground Water Canada also met up with Jeff Hanson from Wellmaster Pipe and Supply in Tillsonburg, Ont., who said the trip to Las Vegas was very worthwhile and he was extremely pleased with the quality of attendees. He also mentioned that you always learn something new at every event that you go to, a sentiment echoed by many other exhibitors.

The show wrapped up on Thursday afternoon with a visit from Santa and his helpers.