Las Vegas – After a year of competition at over 80 qualifying events in the United States and Canada, Grundfos named its 2019 WaterPRO Champion at the National Groundwater Association’s Groundwater Week in Las Vegas.

Michael Raines of Beaver Lake Pump Service in Garfield, Ark., was a walk-on semifinalist who was named WaterPRO Champion and took home the $10,000 prize, Grundfos said in a news release. 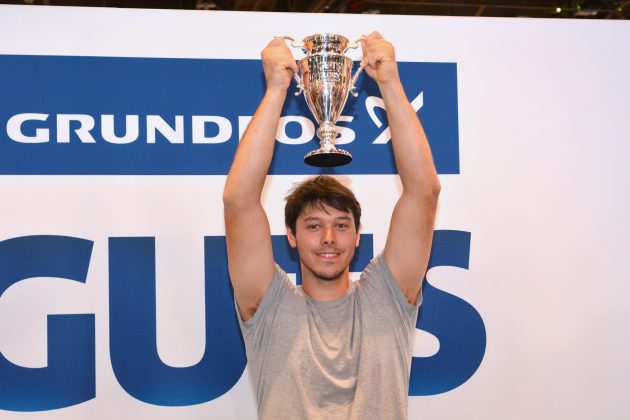 Grundfos held local qualifying competitions throughout the year, tasking participants to complete a virtual reality challenge where they raced to a job site and answered three skill-testing questions to install a three-inch SQ submersible pump in a well. Nine participants from the United States with the highest scores and the best participant from Canada were invited to compete in the semifinals at Groundwater Week. At the trade show, two semifinal walk-on spots were available for show attendees who wanted to try their hand at the challenge at Grundfos’ booth.

The semifinal competition tasked participants with finding and correcting an electrical wiring issue in a submersible pump application in the shortest amount of time. Four heats took place to pare down the 12 participants to the top three fastest. Grundfos product experts were on hand to referee the event.

Immediately following the semifinals, the top three participants were asked to complete a two-part final challenge – the first section tasked participants with hooking up a traditional four-inch submersible pump to a control box, pump saver and pressure switch. The second phase asked participants to hook up a three-inch Grundfos submersible to a pressure switch, highlighting the built-in protection features of the three-inch SQ and significantly shorter installation times.

When installing the traditional four-inch submersible, Raines had the fastest time at 6 minutes and 45 seconds; Philips came in second place with a time of 7 minutes and 29 seconds. Johnson turned the power on before wiring up the switch, which resulted in disqualification.

For the Grundfos three-inch SQ hook-up, Raines had the fastest time at 38 seconds; Philips had a time of 44 seconds. Philips and Johnson received second and third place prizes of $3,000 and $1,500, respectively, while Raines took home the grand prize of $10,000 and the title of WaterPRO Champion.

The finalists were honored during a hospitality event that night at the Hard Rock Café, where more than 800 customers and partners took part in the celebration.

When asked how he could prepare next year, Raines said, “All you can do to prepare is use the experience from all the years in the field. I guess if you just practice putting wires out.”

Learn more about the WaterPRO Championship at grundfos.us/WaterPROChampionship.