Issues may arise when the well is not pumping 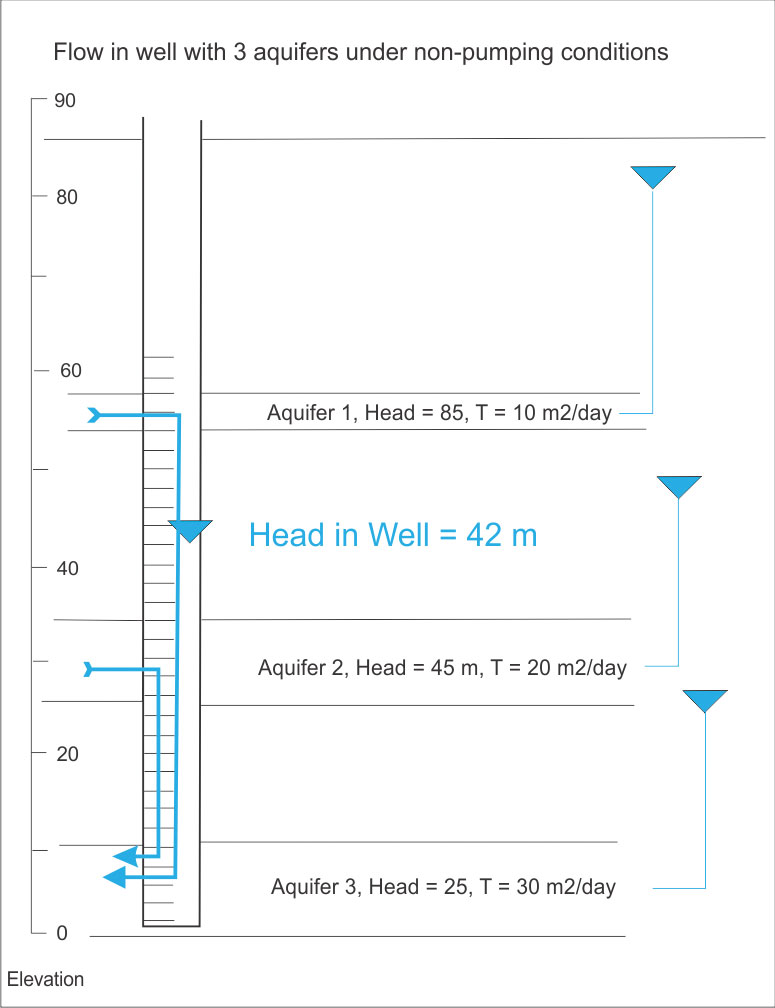 Water well drillers and their clients typically like to obtain the greatest amount of water they can from a well. One way of doing this is to screen the well over several aquifer zones to combine flow from all these aquifers.

However, many jurisdictions discourage completing wells over a long interval with several distinct aquifers.

Why do we have this rule? It turns out that issues arise not when pumping a multiple-aquifer well, but when the well is not pumping. Many unwanted things can happen – dewatering of an aquifer, damage of the well bore and mobilization of toxic metals.

When a well is not pumping there can be aquifer zones with different hydraulic heads and flow between zones can result. If one has ever heard water cascading downwards in a non-pumping well, that is an example of multiple aquifer completion. Sometimes two aquifers are still submerged in the well, where cascading is not heard but there is still flow in the well, in which case well spinner surveys will detect the flowing.

In a non-pumping well a relatively simple formula can be used to calculate the head in the well based on the properties of the aquifers that the well is perforated over. Consider a well that obtains water from three aquifers which have different heads as shown in the figure. Each aquifer has its own hydraulic head (h1, h2, h3) and its own permeability and thickness (called the transmissivity, T1, T2, T3). A formula to calculate the head in the well (hw) is:

Is this a problem? We are draining the upper two aquifers. If there is a well owner nearby that gets water from just the upper or middle aquifer, it is possible that we are dewatering their aquifer. If no one else is around is there still a problem? There could be a problem if the upper aquifer was supplying a spring, creek or wetland in the area and the dewatering is causing these surface water sources to dry up.

Another problem that can arise is that we are introducing waters of different quality from one aquifer to the next. This can lead to chemical or biological growth that plugs up the aquifer. Perhaps the water in an upper zone is oxygen rich (or the water becomes oxygenated during the cascading process) and the water enters a lower zone that is nutrient rich. In these situations, one has an ideal condition for bacterial growth, which may plug the well screen.

Chemical encrustation processes are more subtle and the mixing of waters may involve changes in water chemistry such as dissolved solids, acidity (pH) and even temperature that may cause minerals to precipitate out to plug well screens.

Arsenic and lead are particularly problematic metals, because of both the toxicity of the metals and the confusing ways in which a change in water conditions may cause these metals to be mobile in the water. Mixing of two zones may change the water chemistry enough to cause metal mobility. An example of this was seen in Flint, Michigan, where a change in the water source (with a different chemistry) caused leaching of lead into the water system.

So, although it might seem that the regulation on multiple aquifer completions causes less well productivity and possibly more expense, there are good reasons one might not want too long of a well screen.

Ken Hugo is senior hydrogeologist with Groundwater Information Technologies Ltd. and technical director with the Alberta Water Well Drilling Association. This article is republished with permission from the AWWDA.