Staying safe from electrical and other hazards at work 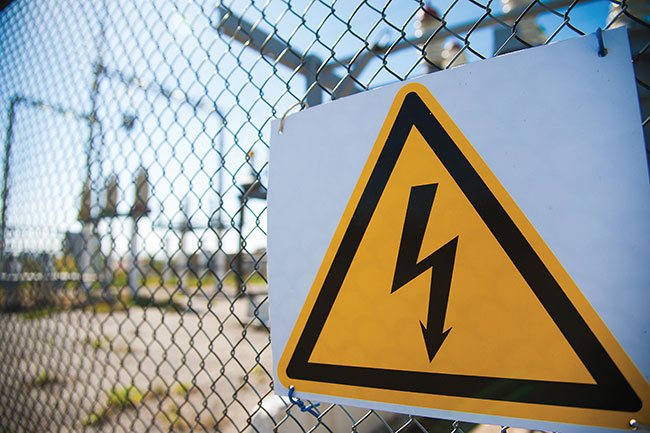 While there are many potential causes of injuries and fatalities on any worksite, electrical hazards may not be top of mind for well drillers.

Ellaline Davies, president of Safety Works Consulting Inc., points out that the problem with electricity is that we don’t see it – it’s not like a hole in the ground. Drillers are not electricians, first and foremost, she adds, so there’s not that “cognizant awareness and genetic fear” around the power of electricity.

“Normally, drillers are more hardwired to think about what’s in the ground rather than what’s up above,” Davies says.

And yet, as far as hazards go, electricity is extremely dangerous. Electrical injury results when a person becomes part of the electrical circuit. There are four main types of electricity injuries: electrocution (fatal), electric shock, thermal burns from heat generated by an electric arc flash and falls caused by muscle contractions or startle reactions. As the Canadian Centre for Occupational Health and Safety website notes, even changing a lightbulb can kill someone if they come into contact with the “live” part of the light socket.1

And if the voltage in a light socket is powerful enough to be deadly, imagine the danger of a drilling rig backing into hydro lines. That’s what happened in Ontario last fall, with tragic results.2

But electrical hazards are just one of many safety hazards people in every industry are potentially exposed to every day. The most recent statistics from the Association of Workers Compensation Boards of Canada lists 951 work-related fatalities in 2017. Of those, 333 were due to traumatic injuries and disorders. In the same year, 251,625 lost-time claims were filed in Canada, 222,189 of which were related to traumatic injuries and disorders.3

But perhaps it is less about the specific hazards than it is about factors contributing to accidents and how we think about safety.

CONTRIBUTING FACTORS
The reasons behind any kind of accident – not only electricity accidents and not just those occurring in the drilling community – are varied.

One of the key contributing factors in accidents is complacency: the attitude that “I’ve been doing the job or 25 years and I know what I’m doing” or “I don’t need to know any more information” or “I’m used to doing it this way.”

“For people who have been doing a job for a long period of time, it usually is complacency,” Davies says. “It’s the habitualization of doing work – the idea that ‘This is how I have always done it’ – but it doesn’t necessarily allow for a different way to do something.”

Adding to this are life’s distractions that take the focus off the task at hand – a party, a holiday, or the weekend coming up, or something happening at home. The jobsite itself can be a factor in an increased risk of accidents. In addition to checking locates, other variables add risk. For example, rural and urban sites each come with their own sorts of hazards. Then there are the risks associated with the equipment – the lack of equipment maintenance or how equipment is operated.

STAYING ON TOP OF SAFETY
While safety training is obviously important, including refresher training, safety needs to go beyond that. Davies says there is value in safety talks because they really do remind people of the daily hazards we could encounter.

“Everyone should be receiving some level of safety information on a daily basis, whether or not it’s about the daily hazards they could encounter on site,” she says.

On a worksite, Davies recommends using checklists to help keep the focus on safe procedures, particularly if following safety procedures doesn’t always come naturally – which it doesn’t for most of us, she adds.

But while safety procedures may not come naturally, what may help is changing the way people think about safety.

BEHAVIOUR-BASED SAFETY
Bill Lillich, sales manager at Environmental Equipment and Supply in Harrisburg, Penn., is a certified well driller and certified pump salesperson. He is also current chairman of the National Ground Water Association Safety Subcommittee. At last year’s association conference, he presented on Behaviour-Based Safety (BBS), an approach that is gaining ground in all types of industries.

“BBS is not a safety program. It is a mindset. A company still needs traditional safety practices,” Lillich says.

“BBS is a process between management and employees that focuses personnel’s attention on theirs and others’ daily safety behaviour,” he says. “This creates a safety partnership.”

Lillich describes BBS has having a continuous loop of five elements:

Instead of safety being a top-down function, it becomes a truly shared responsibility with everyone actively involved in keeping everyone safe. The feedback from employees whose companies are “all in” on the BBS mindset is positive.

“Generally, the comments I’ve heard convey the message that, in the past, employees have brought up safety concerns but were told to continue work because it will make the job go quicker or that there have not been any problems doing it that way so far,” Lillich says. “Now, in companies that follow the BBS theory, employees feel the management takes their input and actually addresses their concerns.”

BBS may also come with other tangible benefits.

“By seeking out ways to prevent injuries and accidents before they occur, companies have been able to lower their safety scores, which, in turn, has allowed them to seek out more projects, and a couple have even seen their insurance costs drop some,” he says.

Not all companies are convinced BBS is for them, with some believing jobs take longer. Lillich has a response to that objection.

“Have you ever had to stop a job because of equipment damage caused by operator error, or had a job stopped because of an injury that could have been prevented if you had taken an extra 15 minutes to look at what hazards or dangers may have been present and discussed ways to prevent them?”

Lillich tells the real-life story of an unnamed company performing oversight at an excavation for their client. At lunch break, the area was cordoned off before everyone headed out. An employee decided to run to catch up with his co-workers, tripped over something and landed on some sharp pieces of gravel, cutting his hand badly enough to require stitches.

“The requirement for wearing gloves on the worksite was put in place by the client, but the employee had removed his before actually leaving the work area boundaries,” Lillich says. “After the investigation, which cost the company roughly $100,000 and many man-hours, the client made it clear that if the company had another accident like this, then they would lose a huge portion of the multimillion-dollar contract. All of this because an employee did not think and take his time.”

SAFETY IN PRACTICE
While BBS can be used in all types of industries, Lillich notes that once the mindset is in place, it carries over to life outside of work.

“Before performing a task, even the simplest one, we should stop and assess what dangers may be involved,” he says.

Before we drive to a jobsite, checking to make sure a load is secured, or if the weather is bad, ensuring the safest route is taken or considering whether the job can be delayed until the weather improves. About electrical work, Lillich asks these and other questions: “Have I followed lockout-tagout procedures? What will be affected if I de-energize this circuit? Is my ladder, hoist or bucket too close to energized lines?”

Davies also lists a series of checks for moving a rig.

They take only a few minutes, but they’re steps you don’t want to regret missing.

“It’s everybody’s job to work safely, so that means it’s everybody’s job to share information and not have people be afraid to say, ‘Hey, I think there’s a problem here,’” Davies says. “We put a lot of stress on our supervisors. Everybody thinks that, ‘Well, it’s their job, so I’m not going to say anything about it.’ But that’s really onerous. That means we almost expect them to be godlike in the way they’re supposed to recognize every problem. But they’re only one person, only one set of eyes, only one set of ears.”

“The big thing is that everybody work together – we really are each other’s keepers in this.”