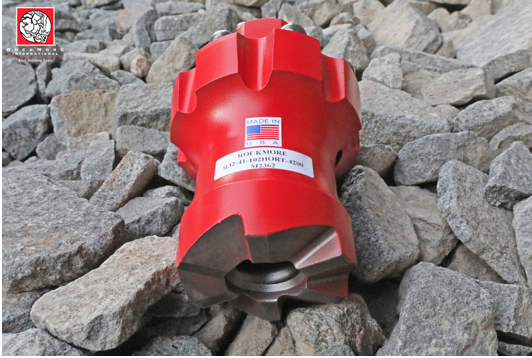 The larger reamed holes are not loaded with blasting agents and therefore allow the rock formation to implode during the explosion phase. The empty voids in these reamed holes promote better rock fragmentation and more efficient blasting patterns.

After blast holes are drilled in the tunnel face with hole diameters ranging from 43-51 mm, certain holes in the pattern are enlarged with a typical reaming bit to 76-102 mm, depending on the blast and rock formation requirements. Standard reaming bits feature face designs with dome or narrow nose fronts and are intended to effectively enlarge a predrilled hole. When they are retrieved out of the hole, however, at the end of the target hole depth, they often seize up due to the loose rock debris inside the hole formation.

Rockmore engineers addressed the challenge of retrieving these style of bits by developing this new model that features retrac-style cutting fins in the rear section to promote better retraction out of the hole. The fins effectively push out any rock chips trapped behind the bit when the drill string is pulled from the blast hole resulting in more efficient reaming operations in underground drilling operations.

The particular model shown is designed to ream from 41 mm to 102 mm holes and configured with a R32 thread connection to the tunnelling rod.