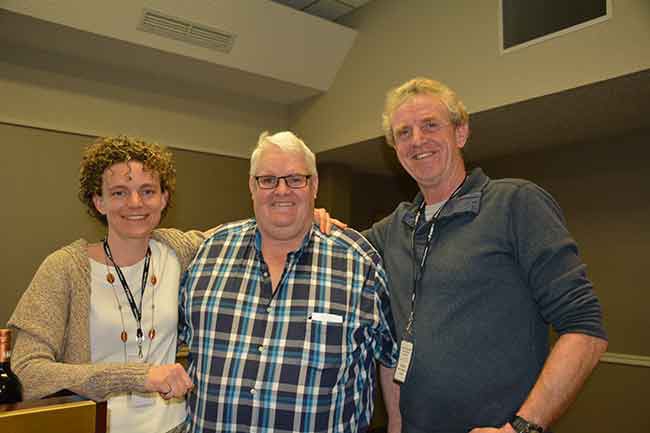 The breathtaking Coast Mountains and the long-awaited coming into force of the Water Sustainability Act and regulations provided a memorable backdrop to the 2016 British Columbia Ground Water Association (BCGWA) conference, trade show and annual general meeting.

“We’ve had a good turnout,” BCGWA general manager Kathy Tixier said of the association’s 45th annual conference, which saw 130 water well drillers, pump installers, hydrogeologists, industry suppliers and others with an interest in ground water mingle under one roof at the Coast Kamloops Hotel March 1-3.

Organizers had actively sought ways to attract BCGWA’s roughly 300 members to the event, said Tixier, who chaired the annual general meeting and conference for the first time.

It looks as if a full slate of hands-on workshops, trade and technical talks, and a trade show peopled by drilling equipment and pump suppliers, provincial government staff and Global Aid Initiative Network reps did the trick.

British Columbia government staff provided opening day sessions on how to use eWELLS, the province’s well-record data entry website, and provided information about the Water Sustainability regulation, including new requirements for ground water licensing. Members welcomed the chance to learn hands-on and ask questions, and these sessions were timely, given that the act and regulations had come into force the previous day.

Albert Kaye of Albert Kaye and Sons on Salt Spring Island came to learn what the new legislation will mean for well drillers and their customers. “The new rental rates don’t apply to domestic wells, so that’s good to know,” he said.

On the show’s first full day, Nick Sargent and Jacqueline Foley of engineering firm Golder Associates described the challenging work they did when hired by Natural Resources Canada to help close the Coldstream Ranch Well, near Vernon, B.C. The well has had problems since June 1965 when government geologists accidentally drilled into pressurized ground water.

The well began spouting at a rate of up to 3,800 litres a minute, forging a crater nearly eight metres in diameter on the private cattle ranch. Over the years, the federal government encountered various problems including a sinkhole that needed filling.

In 2009, the federal government hired the firm which, along with many partners, went to work on the problem to avoid potential contamination of area waterways. Consensus is that the well has finally been closed, in part due to the drilling of a shallow relief well 180 feet deep north of the original well, Foley said. Sargent and Foley told the fascinating story of the life of this well and their remediation project through technical diagrams and compelling photos.

Diana Allen, an internationally known hydrogeologist and professor with Simon Fraser University, spoke to a full room about her extensive research on climate change and its impact on and interconnections with the hydrologic cycle. After a summer of level 3 and 4 drought conditions, there was a consistent decline of snowpack and glacial cover in mountain areas, which Allen said could have a significant effect on hydrologic flow. She has led studies examining precipitation distribution and solar radiation in the Cowichan Valley using MIKE SHE, an integrated hydrological and “very sophisticated” modelling system for building and simulating surface water flow and ground water flow.

By the 2080s, there will be essentially no snowpack left in the Duncan area, with only some of that drawing down due to pumping, Allen said. This will mean increased peak flows and greatly decreased low flows in summer, she said, warning “2015 was bad, but we haven’t seen anything yet.”

Much is uncertain, she said, and although one study she led suggested the amount of snowpack may provide increasing levels of diffuse recharge in the Grand Forks Valley, with so many variables in climate – including heavy rain events – there is great uncertainty about the coming decades.

Veteran water well driller Jim Clark, of A&H Drilling in the Fraser Valley, and Tixier gave a presentation on monitoring well performance through the 100-year life of a well. Clark shared a working model the two created showing the stages of a well’s installation, development and decommissioning. Using overlapping circle diagrams Clark brought into focus the roles of well drillers, pump installers and well owners, noting the points where their work intersects. He stressed that with many water wells outliving the driller, it is important all parties keep detailed well records and share information freely. “Electronic records are the way the industry is going,” he added.

Look for more on the life-cycle model in the Summer issue of Ground Water Canada.

Peter Koteles and Stephanie McDonald from Global Aid Network (GAiN) told a lunchtime audience about deep capped water wells GAiN’s Water for Life volunteers are drilling in West Africa (Benin and Togo) and East Africa (Ethiopia). Villages in these areas apply to have wells installed and volunteer teams drill the wells; the village is responsible for monitoring and maintaining the well through its own bank account, McDonald said. Access to clean water has a profound effect on the lives of villagers, freeing up time that would have been spent gathering water. The projects teach residents and officials a lot about well monitoring, sanitation and maintenance best practices.

Water for Life is always looking for drillers willing to volunteer their time, expertise and equipment, Koteles said, noting Paul Slade accompanied them to Tanzania to help train workers on a 22W rig and Jim Clark recently donated his 22W truck-mounted rig for the worthy cause.

A silent auction organized by secretary Debbie Lamont provided laughs as competitive members hovered over popular items in order to scoop them up. Cariboo Water Wells of Prince George won a donor draw prize of admission to the Ontario Ground Water Association national conference and trade show set for June 8-11 in Niagara Falls.

Long-time alumnus Bruce Ingimundson was named an honorary member of the association for his many years of service, most recently as managing director – a post from which he retired in 2015. Ingimundson couldn’t be at the conference to accept the honour, but Tixier vowed to celebrate at next year’s event, which is to be held at the same venue.