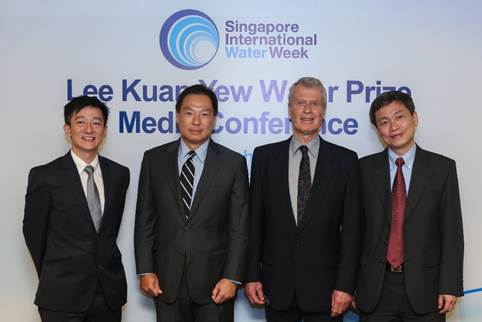 Currently in its seventh edition, the Lee Kuan Yew Water Prize goes to individuals or organizations that drive the development or application of innovative technologies, policies or programs that aim to solve global water challenges.

The prize is being awarded by organizers of Singapore International Water Week, a biennial event that gathers leaders and innovators from the global water industry on a single platform.

Cherry’s research findings and policy impact have contributed to more effective risk management in ground water pollution control measures, as well as revisions and formulation of new ground water remediation guidelines and approaches in several countries including the United States, the organization said in a news release. His contributions have also helped establish new models for public-private partnerships for ground water research.

One of the most important insights unearthed by Cherry subsequently formed the theoretical basis for the set of benchmark criteria used in the disposal of hazardous industrial and nuclear waste, which has been incorporated into regulatory frameworks.

Cherry is also an advocate for the need to monitor and research the effects of shale gas exploitation and fracking on ground water resources, the release said, noting the following: “In recent years, he has focused his research on fractured rock, the least understood of all groundwater systems but one that is particularly susceptible to contamination. His knowledge in fractured rock hydrology and rock drilling has contributed towards the supply of safe drinking water to people living in mountainous bedrock regions with limited vehicle access. Professor Cherry remains active in the scientific community and is currently leading an international team to acquire and test small, low-cost portable rock drills to make small-capacity wells that are designed to have a low risk of bacterial contamination.”

“Professor Cherry exemplifies the attributes needed to drive the development of innovative solutions that address the global water crises,” said Tan Gee Paw, chairman of the Lee Kuan Yew Water Prize nominating committee. “To create real impact and influence policymaking and regulations requires courageous, informed and decisive action. This is clearly reflected in Prof Cherry’s approach to field research and advocacy. The insights and contributions made by Prof Cherry form today’s framework in understanding one of the world’s most precious water resources, and ultimately lead to the provision of safe drinking water to populations that rely primarily on ground water resources.”

“It is an incredible honour to receive the prestigious Lee Kuan Yew Water Prize, and to be accepting the recognition in conjunction with World Water Day speaks volumes of its significance,” Cherry said. “I am confident that global accolades such as the Lee Kuan Yew Water Prize will heighten awareness of the global water challenges and encourage the development of innovative water solutions and technologies for more effective water management and protection of our water resources.”