News and research from the June convention 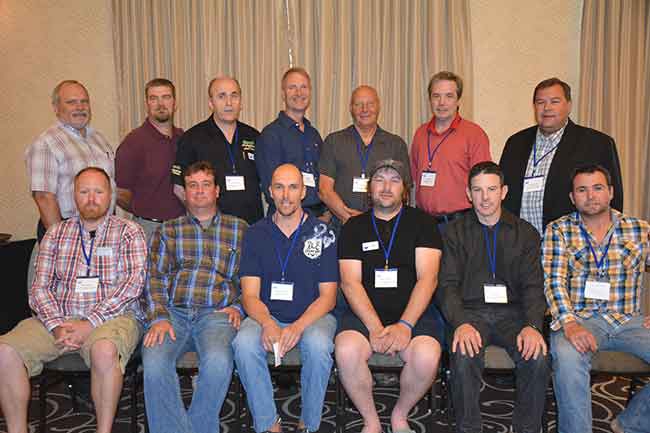 Whether it was a lively round of golf, a 45-minute hike to a University of Guelph research site or a relaxed casino night, members of the Ontario Ground Water Association were game.

Members got together for the association’s yearly conference and annual general meeting at the Delta Guelph Hotel and Conference Centre in Guelph, Ont., June 5 and 6.

During a Saturday session, Fleming College’s Gordon Bailey updated members on news about the past year’s Resources Drilling and Blasting program, which this year celebrates its 40-year anniversary. He announced several new courses, including a welding course on Nov. 28, 2015; a pumps course on March 1, 2016; and a pending course on disinfection. The college has made Best Management Practices 1 available to purchase for $240 and is hoping to offer BMP 2 as well in future.

On Saturday afternoon, president Darren Juneau gave attending members, who numbered about 50, a brief update on the progress of talks between OGWA and the Canadian Environmental Law Association (CELA). The law association had identified loopholes in the new Ontario Reg. 903 that could potentially lead to litigation. Juneau and executive director Craig Stainton met earlier this spring with CELA to discuss the regulation and potential issues that may arise from it. The associations are talking, Juneau said, but it’s expected to be at least a year-long process.

Following the conference sessions, about 40 hale and hearty members took a pleasant – if at times hot – stroll through the University of Guelph Arboretum to the university’s Bedrock Aquifer Field Facility. Participants, including hydrogeologists, well drillers and equipment distributors, were impressed with the depth and breadth of research occurring at the facility, which consists of a workshop where equipment and core samples are housed, educational trailers and two boreholes. Dr. Beth Parker and her research team walked participants through seven stations detailing the extensive and promising work they are doing.

Parker is director of the Centre for Applied Groundwater Research, which is carrying out federally funded field research across Ontario, in other provinces and in the United States on, among other subjects, well contaminates. The field research site is a beehive of activity, with Parker and her team conducting research on source water protection in collaboration with Guelph and other municipalities; new methods for collecting ground water/surface water interaction at the nearby Barber Scout Camp; non-point source contamination by nitrate in Ontario; and contaminated sites.

Saturday evening, about 100 members and families attended the banquet to socialize with colleagues and hear guest speaker David Rudolph, professor in the University of Waterloo’s earth and environmental sciences department. Rudolph, who specializes in regional hydrogeology and ground water protection and management, highlighted some emerging challenges for ground water worldwide. Forty per cent of the Earth’s land area is used for agriculture, he said, and agriculture accounts for 70 per cent of global fresh water withdrawal. By 2050, food demand may increase by 70 per cent and agricultural water demands may increase by 50 per cent, putting a strain on supplies.

Rudolph highlighted a couple of local success stories he has been involved in, including de-icing mitigation in Waterloo region, whereby road salt was measured to try to estimate how much was getting into the ground water, with an overall goal of reducing salt application on local roads by 25 per cent. He and colleagues installed monitoring wells by drilling at the curb where salt usually gets trapped. The unsaturated, or vadose, zone just below the curb holds three to four years’ worth of road salt data, he said, adding that they achieved a reduction of about 22 per cent. “It’s proof we can manage problems without resorting to water treatment,” he said.

Retiring board member Rob MacKinnon was presented with the Tenacity Award for his faithful attendance despite numerous obstacles, presenter Craig Stainton joked.

OGWA office manager Anne Gammage was recognized for her years of assistance to the association and various research groups.

Ron and Shawn Hopper of W.D. Hopper & Sons Ltd. of Seaforth, Ont., accepted an award and congratulations for prospering after an impressive 100 years of operation in the water well drilling industry.

Mark Livingston from Soil Test in Dundalk and London, one of some 40 members who trekked out to the BAFF site, said he thoroughly enjoyed the conference. “If you don’t come to the show, you don’t realize how much the association is doing that you, as a well driller, benefit from,” Livingston said.

Executive director Craig Stainton said the association is doing more and more outreach to related associations and ministries, such as the Ministry of Municipal Affairs and Housing, to “make sure we are on the same page.”