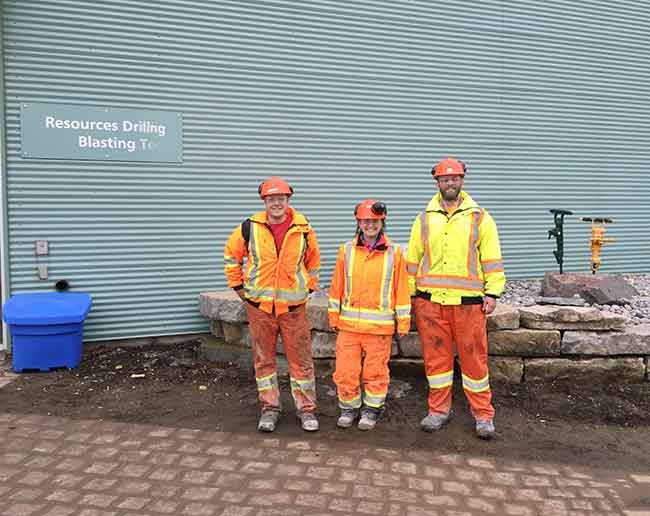 “Typically, there’s word of mouth that works sometimes, and we put ads in the local papers and online, and we’ve tried ads in the Ontario Ground Water Association magazine as well,” says Matt Wilson, vice-president and a third-generation driller. “We seem to have had just as much luck – or equal lack of luck – getting guys from the college and having it work out as we have through other normal channels, whether it’s a neighbour’s kid or just a local guy looking for work or somebody who is searching for a construction-type job.”

“In general, it’s been challenging to find drillers,” Wilson says.

And yet, Gordon Bailey, who has been in the industry since 1973 and an instructor in Fleming College’s resources drilling and blasting program for more than 30 years, says the number of students has increased dramatically.

“We have women now, where we never used to have that before. We very seldom had an international student; we now have anywhere from two to eight in any given semester, from all over the world. That’s a change,” Bailey says.

So what’s the problem?

“Up until recently, it’s been they haven’t liked the compensation package we’ve been offering because they can move out West and make twice as much money,” Wilson says.

Craig Stainton, OGWA’s executive director, agrees that the westward lure has had an effect.

“There has been a draw on graduates from Fleming to out-of-province positions and, with the problems with oil prices, this has stopped some of the bleeding, but it is early days to anticipate people returning,” Stainton says.

This is especially true of graduates going out of country.

But the lure of big paycheques in other industries such as oil is not the only problem facing the water well drilling industry.

“If a licensed driller decides to take a hiatus over a one-year licence cycle, they lose their licence and must negotiate with the MOECC [Ministry of Environment and Climate Change] as to whether they can renew or must start over,” Stainton says. “Bottom line, despite what the graduation figures have been, the actual labour pool of licenced technicians available for ‘active duty,’ so to speak, is much smaller.”

It might help if the program were structured differently.

“Especially our industry, it’s more of a hands-on type of application where more of an apprenticeship structure would work better than [a situation where students] go to school for two years and then come out,” Wilson says. “But we’ve been working with the ministry for 25 years trying to get that to happen and every time it gets close, it disappears, so we’re not holding our breath.”

And there is another problem, one that affects compensation and competition within the province.

“Compensation packages are a large part of the problem and that directly, in my mind, relates to the smaller-than-necessary margins drillers are working on because they insist on competing with each other to a point that erodes the value of their services,” Stainton says.

“If a septic system for a new home costs $25,000, why does the well to fill it cost less than half of that? There are players in the well-drilling field who do not follow the regulations. Following the regulations properly costs a lot of money,” Stainton says. “The renegades, those who we don’t want as members, are out there pricing against our members who follow the regulations.”

OGWA members that have invested money and pay overhead to work in accordance with regulations either don’t get the jobs or work on a much smaller margin, he says.

“The problem really is with the province, the Ministry of Environment and Climate Change,” Stainton says. “If they would effectively police the regulation and put those who do not follow the regulation out of business, it would give those who do it right the ability to make a bit more and, surely, up the wages of their staff.”

“Well drilling is a hard physical job where the compensation packages today are not typically keeping up in comparison,” Stainton says.

Compensation aside, Bailey says, students choosing drilling as a career have other expectations, too – and that isn’t a bad thing.

Because students these days are more particular, they are more likely to succeed once they get there, he says, adding that options are plentiful, among them big companies, small companies, and different lifestyles and living conditions.

Mike Koburg, a student in Fleming’s drilling and blasting program, is keen to start working. At 35, he has a variety of work experience and a business degree. He did his research before he signed up.

“If you’re willing to get dirty and travel, you’ll always have a job, because it is construction, but it’s also a niche market, so if you’re very good in your niche, you’re always going to have a job,” says Koburg, who hopes, with time and experience, to be in a supervisory or management role.

Graham Klammer, 21, switched from engineering to drilling when he realized how much he enjoyed the hands-on work and the challenges of water wells.

“Everything, every day – all the challenges are different. Even if you go to the next door neighbour’s house, you may have to go another 200 feet deeper just to find the water, so you’re always on your toes, figuring it out. It’s constantly thinking, predicting, and seeing what you’re going to be able to do,” says Klammer, who would like to combine drilling with home construction as a side business or as part of a larger company.

Jessica Steele, 22, says the success rate for graduates impressed her, but more than that, getting into this field is a lifestyle decision.

“It’s a job where you can be travelling and it’s all hands-on and outside, and that’s my kind of thing,” Steele says. “Definitely, I want to be travelling with my work, so whatever I get into, I want to move around and see the world. The lifestyle: that’s key for me.”

One of the few women in the program – six out of 100, she says – Steele hasn’t had a hard time at Fleming.

“It’s very inclusive,” she says, adding that she has construction experience as well. “I don’t really have any problems here. They’re fairly good.”

Bailey Holmes, who graduated in spring 2015, says she worried initially about being accepted into the industry.

“Being a female in this industry can be difficult,” says Holmes, who started in geology but switched when she discovered her fascination with well drilling. “For me, I found employers who would attend the job fairs at Fleming would doubt me or my capabilities due to my size and the fact that I look very girly when I am out of my work clothes and coveralls.”

But that made it more satisfying for Holmes to prove them wrong: the company that hired her had her on controls within just a couple weeks of helping on the DR-24.

“I am naturally a very competitive person and, in this industry, I feel that is what helps me most with being female because I don’t want to be treated any different than the guys,” she says. “I believe a team is only as strong as its weakest member and that drove me to never be that person.”

“I am no longer worried about this because, where I am, everyone is great and I really am treated as an equal,” she says.

Asked about their worries, Steele, Koburg, and Klammer discussed job security, economic swings, and, because of warnings from experienced drillers, long-term health. However, of particular concern was the environment, which Gordon Bailey says is common.

“I’ve seen a greater appreciation for the environment and the role the driller plays in protecting the environment, whether it’s the integrity of the environment before they start drilling or ground water as a resource,” he says. “That’s been embedded in them not only here, but also the water well drillers that are out there in Ontario, because now we have mandatory training and that philosophy is hammered home and now it’s second nature.”

Asked how the industry could be more appealing to students, Bailey says it isn’t up to the industry.

“The industry is what it is. It’s up to the students to accept the industry for the way it is or not, because there’s going to be travelling or there isn’t going to be travelling. It’s going to pay this much money, not this kind of money. So it’s not the tail wagging the dog, it’s really the other way around,” he says. “The companies come and they do a presentation, and we try to give the students good insight as to what’s going to be expected of them once they leave here so they can make a good decision as to what program or what industry they want to get into.”

Holmes suggests companies get involved with the Fleming program, either on the advisory board or by volunteering to do presentations – and, of course, participating at the job fair.

“My advice is that the drillers must remember that for every employee they find for which well drilling is a ‘calling’ – and that person will do it no matter what the compensation level – there are those that consider it just a job. As a job, it must stand up to comparison, be it compensation, satisfaction, perks – any and all ways you look at it, it must stack up as a reasonably well-paid job, one where you can hope to earn enough to raise your family.”

Holmes hints at that distinction with her advice for students considering a career in drilling.

“Really consider if you are cut out to work early mornings and late nights or in the outdoor elements. Sometimes, you will work 12-hour days or longer in the rain, snow, or whatever Mother Nature decides to throw at you. There’ll be days where you can barely even hear the rig running because you’ll have so many mosquitoes and black flies in your helmet,” she says.

“That being said, I can promise you will see some of the most beautiful sunrises and sunsets of your life. You will always get to witness those pretty rainbows after the storms that pounded on you all day and, even if it’s minus 35, it’s nothing that a woodstove and a hot bowl of chili can’t cure.”

That’s the kind of attitude Bailey likes to see.

It used to be work only farm kids could handle, Bailey says, but city people who have been exposed to an outdoor lifestyle are in the program, too.

“It’s refreshing to see there’s still people that want to go out there and are going to be successful.”

Carolyn Camilleri is a Toronto-based writer, editor, and content strategist. She has been writing for consumer and trade magazines, as well as businesses and organizations across the country, for more than 15 years.
Print this page